Prêles (German name: Prägelz) is a former municipality in the Jura bernois administrative district in the canton of Bern in Switzerland, located in the French-speaking Bernese Jura (Jura Bernois).

Prêles is first mentioned in 1179 as Prales though this document is believed to be a 12th-century forgery. In 1185 it was mentioned as Preles and it used to be known by its German name Prägelz.

Beginning in the 12th century the noble de Perls family first appears in records. The family existed for several centuries before vanishing from records in the 15th century. Throughout its history the village was part of the Herrschaft of Tessenberg (Diesse). The major landowners in the village included the collegiate church of Saint-Imier and Erlach Abbey. It was part of the parish of Diesse and accepted the Protestant Reformation along with the rest of the parish between 1530 and 1554.

The construction of a cable railway between Ligerz and Prêles in 1912 turned it into a minor tourist destination. Until the 1950s agriculture was the most important industry in the village. Today many residents commute to jobs in Biel or La Neuveville. In the past decades a number of new houses were built for the growing commuter population. 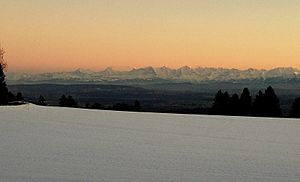 View of the Bernese Alps from Prêles

During the same year, housing and buildings made up 6.0% and transportation infrastructure made up 2.7%. while parks, green belts and sports fields made up 1.6%. Out of the forested land, 23.1% of the total land area is heavily forested and 4.0% is covered with orchards or small clusters of trees. Of the agricultural land, 37.4% is used for growing crops and 23.1% is pastures and 1.7% is used for alpine pastures.

The former municipality is located on the Plateau de Diesse. It consists of the village of Prêles and the hamlet of Châtillon.

All content from Kiddle encyclopedia articles (including the article images and facts) can be freely used under Attribution-ShareAlike license, unless stated otherwise. Cite this article:
Prêles Facts for Kids. Kiddle Encyclopedia.