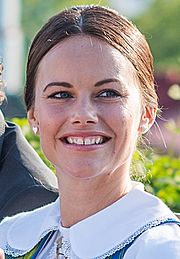 Princess Sofia of Sweden, Duchess of Värmland (born Sofia Kristina Hellqvist on 6 December 1984) is the wife of Prince Carl Philip, Duke of Värmland. She began dating Prince Carl Philip in 2010. She has also been a glamour model and reality television contestant. Hellqvist has appeared on the reality show Paradise Hotel.

She married Prince Carl Philip at Slottskyrkan in Stockholm on 13 June 2015. After the marriage she got the title Princess of Sweden, Duchess of Värmland. Their first child Prince Alexander Erik Hubertus Bertil, was born on 19 April 2016. In March 2017, it was announced that the couple's second child is expected in September 2017. Their second son Prince Gabriel Carl Walther was born on 31 August 2017.

All content from Kiddle encyclopedia articles (including the article images and facts) can be freely used under Attribution-ShareAlike license, unless stated otherwise. Cite this article:
Princess Sofia, Duchess of Värmland Facts for Kids. Kiddle Encyclopedia.