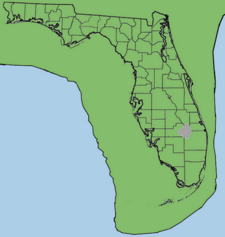 Florida coast about 10,000 years ago, during the early Holocene, just after Pleistocene.

The pristine mustached bat (Pteronotus (Phyllodia) pristinus) is an extinct Late Quaternary species of bat in the endemic Neotropical family Mormoopidae. It was distributed in Cuba and possibly Florida (United States).

Florida specimens (two mandibles) were only tentatively referred to Pteronotus cf. P. pristinus, because they could not be directly compared with the Cuban material (several skulls, postcranial elements), but they may represent P. pristinus.

This is the only occurrence of Pteronotus in the United States, fossil or recent. Cuba is the most likely source for West Indian bats in Florida. 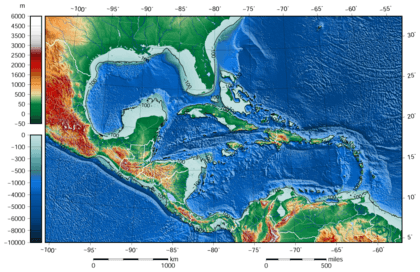 The shaded relief map of the Gulf of Mexico and Caribbean Sea area contoured at -100 m depth.

In Florida, the pristine mustached bat became locally extinct at the end of the Pleistocene, what probably resulted from the rise in sea level, the subsequent flooding of caves and loss of roosting sites.

The sea level in Florida was as much as 100 m lower in late Pleistocene, as well water tables, and cave systems in Monkey Jungle Hammock, Cutler Hammock and Rock Springs were dry. But during the latest Pleistocene the rising sea level caused flooding of these cave systems and destroyed a hot and humid microclimate of so-called hot caves. Currently two first of them are sediment-filled sinkholes few meters above sea level, third one is submerged.

Such a pattern of extinction or extirpation is known also from many small islands in West Indies (Bahamas, Cayman Islands, Lesser Antilles).

All content from Kiddle encyclopedia articles (including the article images and facts) can be freely used under Attribution-ShareAlike license, unless stated otherwise. Cite this article:
Pristine mustached bat Facts for Kids. Kiddle Encyclopedia.