Originally named Coo-Y-Yah, Cherokee for Huckleberry, it was renamed Pryor Creek in 1887, the name of the local railroad station (named for the creek). Due to confusion in distinguishing handwritten mailing addresses to Pryor Creek and Pond Creek, the U.S. Postal Service name for the city was shortened to Pryor, though the official name of the city remains Pryor Creek.

In the early 1800s, treaties with the Cherokee, Osage, and Choctaw gave the tribes allotments in Indian Territory in the region that would become Oklahoma. Captain Nathaniel Hale Pryor, who was married to an Osage woman and served as an agent to the Osage people, was among those settling northeastern Oklahoma. He established a trading post on Grand River, shortly before the Union Mission was established 5 miles southeast of present-day Chouteau in 1820.

In 1870, the Missouri-Kansas-Texas Railroad started construction in the Cherokee Nation along the Kansas border, laying tracks to Texas. By June 1871, the railroad reached present-day Pryor Creek.

A post office was eventually established naming the town Coo-y-yah, Indian Territory. Coo-y-yah is the Cherokee name for "huckleberry". On April 23, 1887, Coo-y-yah was changed to Pryor Creek, but the "Creek" was dropped by the post office on January 26, 1909.[The official name of the city government is still Pryor Creek despite a proposition put before voters in 1963 to change the name.

In 1951, voters approved the present city charter of a mayor-council government system, which provided for the election of a mayor, clerk, treasurer, police chief and eight councilors. The charter also established a cemetery, park, library board, and a municipal utility board, which oversees operations of the city-owned gas, water, electric and sewer systems. 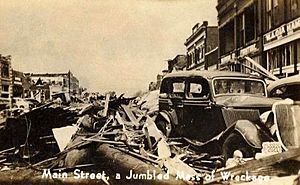 Aftermath of the Tornado that hit Pryor Creek on April 27, 1942

On April 27, 1942, a tornado swept along Pryor Creek's main street from the western edge of the business district to the eastern edge of the city, destroying nearly every building and causing extensive damage to the residential section. The storm killed 52 people, according to the U.S. Weather Bureau, but The Associated Press set the total at 60 two days after the storm. More than 400 were injured in the storm that caused damage estimated at US$3 million.

The F4 tornado struck about 5 p.m. (17:00) local time, an hour and a half after one hit near Talala, Oklahoma, and mowed a path about 5 miles (8 km) long, killing three and injuring 12. Talala, which was not hit, is about 30 miles (48 km) northwest of Pryor Creek. Governor Leon C. Phillips put the area under martial law, but because the Oklahoma National Guard had been activated for service during World War II, he sent state troopers to rescue victims, maintain order and prevent looting.

The Pryor tornado ranks as the fifth deadliest in Oklahoma history behind tornadoes at Woodward in 1947, Snyder in 1905, Peggs in 1920, and Antlers in 1945. The May 3, 1999, tornado at Midwest City caused more damage but fewer deaths.

There were 3,567 households out of which 30.2% had children under the age of 18 living with them, 52.1% were married couples living together, 10.6% had a female householder with no husband present, and 34.3% were non-families. 30.9% of households were made up of individuals and 16.3% had someone living alone who was 65 years of age or older. The average household size was 2.35 and the average family size was 2.95.

Pryor Creek is home of Catch the Fever Music Festivals, which is host to Rocklahoma, just 4 miles (6.4 km) north of Pryor Creek.

Area recreational facilities include a brand new state of the art municipal recreation center that includes an indoor swimming pool, fitness center, meeting rooms and a chapter of the Boys and Girls Club. Pryor also has five city parks, Whitaker, Centennial, Roosevelt, Bobby Buck, Earl Ward, as well as a softball & baseball complex. Earl Ward Park is home of the city-owned 18-hole golf course and is located just east of the industrial park on Highway 69A. Pryor is also just a few miles away from Lake Hudson, Grand Lake and Ft. Gibson Lake

All content from Kiddle encyclopedia articles (including the article images and facts) can be freely used under Attribution-ShareAlike license, unless stated otherwise. Cite this article:
Pryor Creek, Oklahoma Facts for Kids. Kiddle Encyclopedia.