Purga is a rural community on the outskirts of Ipswich, Queensland, Australia. At the 2011 Australian Census, Purga and surrounding suburbs recorded a population of 600. The western boundary of Purga follows Warrill Creek. 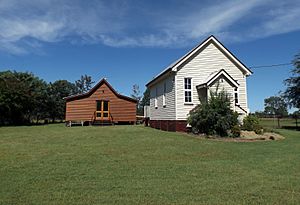 The area was named after the parish which was derived from the Aboriginal word pur-pur, meaning a meeting place. A railway station on the Dugandan railway line was opened in 1882. A primary school was opened in 1871 and closed in 1967.

Purga has a number of heritage-listed sites, including:

All content from Kiddle encyclopedia articles (including the article images and facts) can be freely used under Attribution-ShareAlike license, unless stated otherwise. Cite this article:
Purga, Queensland Facts for Kids. Kiddle Encyclopedia.