Peak Crossing is a locality split between the City of Ipswich and the Scenic Rim Region of Queensland, Australia. In the 2011 census, Peak Crossing had a population of 768 people. 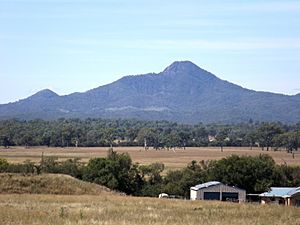 Peak Crossing is located 20 kilometres (12 mi) south of Ipswich. The town is surrounded by farming land, mostly small cropping. The western boundary is marked by the east branch of Warrill Creek, a tributary of the Bremer River. Just upstream from where the road joining Peak Crossing with Mutdapilly crosses Warrill Creek is the Churchbank Weir.

The eastern parts of Peak Crossing are dominated by the naturally vegetated central peaks of the Teviot Range. These include Mount Goolman, Ivorys Rock, Mount Blaine and Flinders Peak. Also located here is the Flinders Peak Conservation Park and sections of the Flinders-Goolman Conservation Estate. These parks are used for bushwalking, horse riding, mountain bike riding and camping. 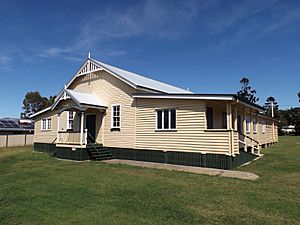 The name Peak Crossing refers to a mountain and a once important road crossing. The mountain Flinders Peak is to the east of the township, named in honour of the explorer Matthew Flinders. The road crossing is the intersection of the Ipswich-Boonah Road and the Old Warwick Road (which connected Ipswich to the local towns Boonah and Warwick respectively), which is adjacent to Purga Creek. Today, these roads are of less importance as the Cunningham Highway (approx 8 kilometres (5.0 mi) west of Peak Crossing) carries most of the traffic to these destinations.

Peak Crossing Post Office opened on 2 January 1886 (a receiving office had been open from 1885. 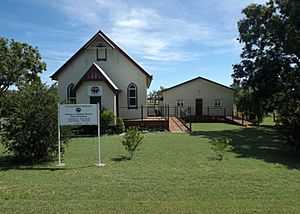 All content from Kiddle encyclopedia articles (including the article images and facts) can be freely used under Attribution-ShareAlike license, unless stated otherwise. Cite this article:
Peak Crossing, Queensland Facts for Kids. Kiddle Encyclopedia.