Mutdapilly is a locality in south-east Queensland, Australia. It is split between the local government areas of City of Ipswich and Scenic Rim Region.

Mutdapilly is centrally divided by the north/south running Cunningham Highway. The western boundary follows Warrill Creek. There is one of fifteen air quality monitoring stations in the region located at Mutdapilly. It was established in 1995. 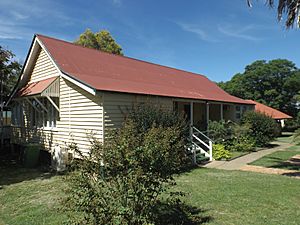 The name Mutdapilly is believed to be a combination word from the Yuggera language (Yugarabul dialect) where mudtherri means sticky or muddy and pilly means gully. The name was give by Captain Patrick Logan on 9 June 1827.

Local resident, Mr Denman, donated 2 acres of land for a school. The Normanby State School and teacher's residence was opened on 27 April 1874; the first head teacher was John Stanfell Clowes who served at the school until 31 July 1876. The school was renamed Mutdapilly State School on 1 April 1968.

St Aidan's Church of England was built in Mutdapilly in 1921, designed by Charles Chauvel (the Australian filmmaker). The church closed in 1974 and the building is now used as a residence.

All content from Kiddle encyclopedia articles (including the article images and facts) can be freely used under Attribution-ShareAlike license, unless stated otherwise. Cite this article:
Mutdapilly, Queensland Facts for Kids. Kiddle Encyclopedia.