The Queensland Air Museum is a not-for-profit community owned aviation museum located at Caloundra Airport in Queensland, Australia. Its mission is to collect and preserve all aspects of aviation heritage with an emphasis on Australia and Queensland. The museum has the largest collection of historical aircraft in Queensland and it also has a large collection of aircraft engines, equipment, artefacts, photographs and books.

On 2 June 1974 the Queensland Air Museum was inaugurated with the official unveiling of a Canberra bomber that had been purchased from a Government disposal. The aircraft was displayed at the Pioneer Valley Park, which was a museum at Kuraby in Brisbane's southern suburbs. The park was eventually closed and the aircraft was moved to a leased site at Nudgee on the north side of Brisbane. The collection began to grow when a Meteor TT20 was donated to the museum by the British Government and a Vampire and two Sea Venoms were acquired.

Due to the construction of the new Brisbane Airport nearby, the collection was forced to move to a temporary holding area on the airport site. Exorbitant rental costs at this location eventually lead to the museum being evicted and the resultant publicity resulted in an offer of a permanent home on the Sunshine Coast by the Landsborough Shire Council. On 14 June 1986 the collection was relocated to a site at Caloundra Airport which had a newly built hangar. The official opening of the museum took place on 4 April 1987 by Mrs Ly Bennett, wife of the museum's first patron, the late Air Vice-Marshal Don Bennett. Don Bennett was the Queensland born founder of the World War II Bomber Command Pathfinder Force and to honour this the road in front of the museum was named Pathfinder Drive.

Now with a permanent home the collection continued to grow and in 1989 it was bolstered by an ambitious recovery expedition to Singapore where a Sea Vixen, Meteor and Hunter were purchased from a scrap metal dealer just days before their destruction. The aircraft were disassembled and successfully shipped to Australia where they were restored and placed on display. 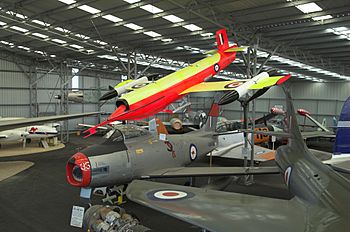 The two hectare museum site has been steadily developed with the construction of a second hangar being completed in July 2004 which was later extended in 2006. A library, restoration and storage facilities have also been constructed. In September 2006, Mr Allan Vial, DFC OAM OPR (Pol), become the Patron of the Queensland Air Museum, he is also Life President of the Pathfinder Force Association in Australia.

A plan to relocate Caloundra Airport placed an uncertain future on the museum for many years. But on 2 September 2010 the Queensland Premier Anna Bligh announced in Parliament that the airport would continue to operate on its present site and she said this would provide "certainty for the iconic air museum". The museum's situation further improved when the Sunshine Coast Regional Council granted the museum a 30-year lease extension and on 28 March 2013 a Caloundra Aerodrome Master Plan was adopted. The Plan recognised the museum's tourism potential and provided for a substantial increase in the size of the museum's site to allow for expansion.

The museum's aircraft collection is made up of a large variety of aircraft types that represent many aspects of aviation. 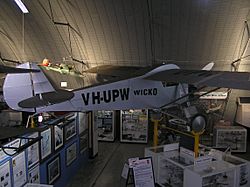 The first powered aircraft to be designed and built in Queensland was the Wicko Cabin Sports. It was a wood and fabric monoplane designed and built by Geoff Wikner and it first took to the air in January 1931 from Archerfield Airport in Brisbane. The Queensland Air Museum obtained copies of the original plans of this significant aircraft and constructed a replica, which went on display at the museum in 2007. 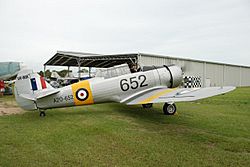 CA-16 Wirraway Mk.III A20-652 undertaking an engine run at the Queensland Air Museum

The Commonwealth Aircraft Corporation's Wirraway has been described as the aircraft that established a viable Australian aircraft industry. The Wirraway was a licensed built North American NA-16 which was manufactured between 1939 and 1946. With 755 manufactured it is the second most produced aircraft type in Australia. Deliveries to the RAAF began just months before the outbreak of World War II and they served in New Guinea, the Solomon Islands and Borneo areas against the Japanese in tactical reconnaissance, target marking, dive bombing and army co-operation roles. They were also used by the RAAF as an advanced trainer throughout the war and for many years after with their retirement from service in 1958.

The example in the Queensland Air Museum collection is A20-652 construction number 1104. It was built in July 1944 in the final production batch which had the designation of CA-16. The museum purchased the aircraft with a grant from the John Villiers Trust in October 2010. It was flown from Adelaide, South Australia to Caloundra and placed on display in a flyable condition. The aircraft is maintained to preserve it in an operational condition and it is run in the regular Operation Engine Collection public displays.

The F-111 aircraft was the RAAF's premier strike asset for 37 years until the type's retirement in December 2010. It was operated by 1 and 6 Squadrons for all of that time from the RAAF Base Amberley near Ipswich, Queensland. The aircraft had the ability to perform a "dump and burn" which involved dumping fuel from an outlet between the engine jet pipes and igniting it with the engine's afterburners. The spectacular flame produced was popular at air shows, sporting events and firework displays, such as the annual Brisbane River Fire firework show and the 2000 Sydney Olympics closing ceremony.

The Queensland Air Museum has F -111C aircraft A8-129 on display, which is on long term loan from the RAAF. This aircraft was in the first group to arrive in Australia on 1 June 1974 and it also flew in the final operational flight of the type on 3 December 2010. The aircraft is painted in its delivery camouflaged colour scheme with 1 Squadron markings on one side and 6 Squadron on the other. 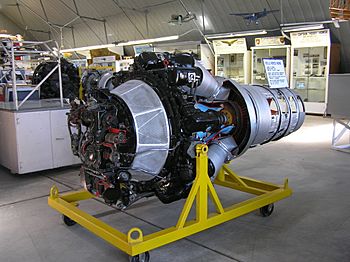 The museum has a large collection of aircraft engines many of which are displayed on stands beside the aircraft. They include piston engines, turbojets and turboprop types.

The museum also has an Operational Engine Collection, which has a number of engines mounted on running rigs, that are run in regular public displays. They include a range of piston engine types ranging from a 40 horsepower four cylinder Continental A40 up to a 1,450 horsepower fourteen cylinder Pratt & Whitney R-2000 Twin Wasp radial. 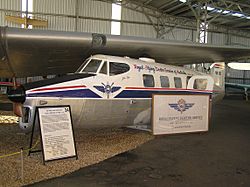 An important part of the development of the remote Australian inland area has been the Royal Flying Doctor Service (RFDS), which provides medical support to isolated communities. The Australian Inland Mission Aerial Medical Service, which would later become the RFDS, was established by Reverend John Flynn on 15 May 1928 in Cloncurry, Queensland. Flynn had a vision to use radios and aircraft to connect doctors and patients in remote locations. He engaged Alfred Traeger to develop suitable two-way radios which used a pedal generator to provide reliable power and the service took flight using a de Havilland DH-50 aircraft leased from Qantas which is another Queensland icon. The RFDS continues to operate a fleet of over 60 aircraft across every State of Australia. The Queensland Air Museum's RFDS display includes two DHA-3 Drover aircraft used by the RFDS and an example of a Traeger radio. The Drovers, VH-FDR named John Flynn after the founder and VH-FDS named Norman Bourke, were used by the Queensland Section between 1951 and 1968. 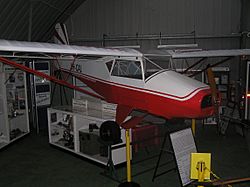 As a tribute to the local aircraft producer Calair Corp / Skyfox Aviation the museum has a major display, which features a CA21 Skyfox aircraft representing the prototype VH-CAL. This aircraft is restored using parts from several Skyfox aircraft with the wing being from the original aircraft. Calair Corporation was created in October 1989 to produce a derivative of the Denny Kitfox at Caloundra Airport. The aircraft to be known as the Calair CA21 Skyfox was a two-seat high-wing monoplane with a tail wheel undercarriage for use in the training and recreational flying market. A number of changes were made to the Kitfox design to increase the loaded weight, which brought it up to the Australian CAO 101-55 standard. This allowed it to be commercial produced and be used for general aviation pilot training and it was the first aircraft in Australia to be so certified. It was powered by a 2.1L, 58.2 kW (78 hp) Aeropower engine built in Perth, Western Australia, which was essentially a Volkswagen adaptation. 33 CA21s were produced between July 1990 and August 1991.

In 1991 the company was sold and the name was changed to Skyfox Aviation Ltd. Production then switched to the CA22 which incorporated numerous changes including a change to a Rotax 912 engine. A total of 61 were produced at which time it gained certification under the European Joint Airworthiness Requirements for Very Light Aircraft (JAR/VLA), the first Australian aircraft to do so. The next 10 aircraft produced after the certification in June 1993 were designated CA25.

The final stage in the development of the Skyfox was the production of a model with tricycle landing gear to better cater for the pilot training market. This was called the CA25N Gazelle and would take over the production run. A total of 66 would be completed before production ceased in May 1998 when the company under financial difficulties was placed under voluntary administration.

During World War II the British Bomber Command was engaged in night time area bombing of Germany. In 1942 these operations were resulting in an aircraft loss rate of between 4 and 5 percent and only a third of the aircraft were able to drop their bombs within 5 miles (8 km) of the target. In an effort to improve the accuracy the Pathfinder Force was created on 15 August 1942, under the leadership of Acting Group Captain Don Bennett, who was born in Toowoomba. The specialised squadrons in the Pathfinder Force had aircraft that were crewed by experienced crews who would lead the main bomber force to locate the target and mark it with flares. This would give the bomber force coming in behind an improved chance of dropping their bombs in the right place. To commemorate the Pathfinder Force the museum has a large display, which was established and maintained in conjunction with the Pathfinder Force Association of Australia. It includes uniforms, memorabilia, models and a reproduction of Don Bennett's office which contains many of his original possessions. The display is located adjacent to the F-111 strike aircraft which provides a link to the modern air force.

All content from Kiddle encyclopedia articles (including the article images and facts) can be freely used under Attribution-ShareAlike license, unless stated otherwise. Cite this article:
Queensland Air Museum Facts for Kids. Kiddle Encyclopedia.