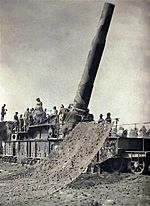 A railway gun, also called a railroad gun, is a large artillery weapon, built on, transported by, and fired from a specially designed railway wagon. Many countries have built railway guns, but the best known were made by Krupp and used by Germany in World War I and World War II. Smaller guns were often part of an armoured train.

Railway guns are no longer used. Their large size and limited movement made them easy targets. They have been replaced by aircraft, rockets, and missiles.

The idea of railway guns was first suggested in the 1860s by a Mr Anderson. He published a pamphlet in the United Kingdom titled National Defence in which he proposed a plan of ironclad railway carriages. A Russian, Lebedew, claimed to have first invented the idea in 1860 when he is reported to have mounted a mortar on a railway car. 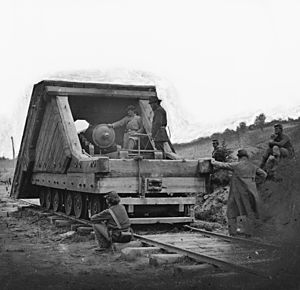 A railway gun used in the Siege of Petersburg

The first railway gun used in battle was a banded 32-pounder Brooke naval rifle. In the American Civil War it was mounted on a flat rail car and protected with sheets of iron. On 29 June 1862, Robert E. Lee had the gun pushed by a locomotive over the Richmond and York River line (later part of the Southern Railway) and used at the Battle of Savage's Station. There is also a photo of a Union 13-inch siege mortar mounted on a rail car during the Siege of Petersburg, Virginia. It was nicknamed the Dictator or the Petersburg Express.

The start of the First World War caught the French with a shortage of heavy field artillery. Large coastal defense guns and naval guns were moved to the front. These were usually unsuitable for field use and needed some kind of mounting. The railway gun was an obvious solution. By 1916, both sides were usuing railway guns.

Baldwin Locomotive Works made five 14"/50 caliber railway guns on trains for the United States Navy during April and May 1918. Each train carried a Mk 4 14"/50 caliber gun. These were a 14 in (360 mm) naval rifle used on New Mexico and Tennessee class battleships, mounted on a rail carriage with four 6-wheel bogies. One of these guns is on display outside the museum at the Washington Navy Yard. 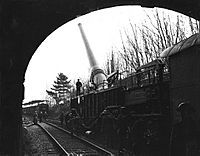 Boche Buster, seen from within Bourne Park Tunnel, at Bishopsbourne in Kent, 21 March 1941

The Second World War saw the final use of railway guns. The Germans used the massive 80 cm (31 in) Schwerer Gustav gun, the largest artillery piece to be used in battle. The rise of the aeroplane effectively ended the use of the railway guns. Like battleships, they were big, expensive, and easily destroyed from the air.

All content from Kiddle encyclopedia articles (including the article images and facts) can be freely used under Attribution-ShareAlike license, unless stated otherwise. Cite this article:
Railway gun Facts for Kids. Kiddle Encyclopedia.