Redcar is a seaside town on the Yorkshire Coast, Northern England. It is in the Borough of Redcar and Cleveland, North Yorkshire, and located approximately 7 miles (11 kilometres) east of Middlesbrough centre.

The Teesside built-up area's Redcar subdivision had a population of 37,073 at the 2011 Census. The town is made up of Coatham, Dormanstown, Kirkleatham, Newcomen, West Dyke, Wheatlands and Zetland wards. In 1922 it gained a town charter and was governed by the municipal borough of Redcar from its chartering until 1968. Since the County Borough of Teesside, which existed from 1968 until 1974, the town has been unparished.

Redcar occupies a low-lying site by the sea; the second element of its name is from Old Scandinavian kjarr, meaning 'marsh', and the first may be either Old English rēad meaning 'red' or OE hrēod 'reed'. Redcar originated as a fishing town in the 14th century, trading with the larger adjacent market town of Coatham. Until the mid-19th century it was a sub-parish of Marske-by-the-Sea—mentioned in the Domesday book.

In 1846 work was completed on the Middlesbrough and Redcar Railway, created to attract tourism and trade, but like much of the Middlesbrough region, Redcar's real population expansion began with the discovery in 1850 of iron ore in the Eston area of the Cleveland Hills. After the construction of Redcar Racecourse in 1875, Redcar prospered as a seaside town drawing tourists attracted by its eight miles of sands stretching from South Gare to Saltburn-by-the-Sea. Numerous ships have foundered off the Redcar coastline and many of their wrecks still exist.

Plans for a pier were drawn up in 1866, but lay dormant until prompted by the announcement of plans to build a pier at Coatham in 1871. Misfortune struck both piers soon after they were built. 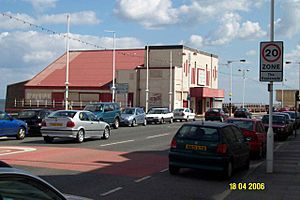 Regent Cinema, at the location of Coatham Pier

Coatham Pier was wrecked before it was completed when two sailing ships were driven through it in a storm. It had to be shortened because of the cost of repairs and was re-opened with an entrance with two kiosks and a roller-skating rink on the Redcar side, and a bandstand halfway along its length. In October 1898 the pier was almost wrecked when the barque Birger struck it and the pier was thereafter allowed to disintegrate. A glass house for concerts was added to its remaining section and in 1928 was replaced by the New Pavilion theatre which became the Regent Cinema in the early 1960s. Comedian and entertainer Larry Grayson coined his catchphrase "Shut That Door!" while performing there, since the stage door was open to the cold North Sea breeze. An anchor from the Birger can be seen on the sea front pavement opposite the Zetland Lifeboat Museum.

Disaster struck Redcar Pier in the 1880s and 1890s when a series of ships broke through it. In October 1880 the brig Luna caused £1,000 worth of damage. On New Year's Eve 1885 SS Cochrane demolished the landing stage. In 1897 the schooner Amarant went through the pier and in the following year the pier head and bandstand burned down. In 1907 a pavilion ballroom was built on the pier behind the entrance kiosks and in 1928 it was extended. The pier was deliberately breached (sectioned) in 1940 to prevent its use by enemy invasion forces. As a result of sectioning, damage by a mine explosion and deterioration it was never reconnected and instead allowed to become even more dilapidated. The pavilion continued in use after the war but storm damage led to it being declared unsafe and it was demolished in 1980–1981.

The Zetland is the world's oldest surviving lifeboat. It was built by Henry Greathead of South Shields and is housed in a sea-front museum at Redcar. The museum is independent and operated by a dedicated group of volunteers. The lifeboat was first stationed at Redcar in 1802.

Today Redcar is made up of numerous areas, including Coatham, Warrenby, Dormanstown, Lakes Estate, Redcar East, The Ings, Ings Farm, Mickledales and Westfield.

There are about twenty three listed buildings in Redcar. At the west end of High Street is a Grade II listed clock tower, a memorial to King Edward VII who was a regular visitor to Redcar. The tower has now been refurbished.

On the sea front stands the Victorian building of the former Coatham Hotel. The ballroom of the hotel was home to the Redcar Jazz Club, a venue for the up-and-coming bands of the late 1960s and early 1970s. Also on the sea front is the Grade II listed Zetland Lifeboat Museum.

To the east of Redcar is the listed Church of St Peter, designed by Ignatius Bonomi and built 1822–28.

In the south-east of Redcar is an aircraft listening post built in 1916 during the First World War as part of a regional defence system to detect approaching aircraft, principally Zeppelins, and give early warning. It is an example of an acoustic mirror, of which other examples can be found along the east coast of Britain. The mirror was used up until the invention of radar and although it was built on open fields today a modern housing estate now surrounds it. Only the concrete sound mirror remains and is now a Grade II listed building.

Redcar has three railway stations, on the Tees Valley Line served by Northern. From west to east, they are British Steel Redcar, with a limited service for steel workers; Redcar Central, serving the town centre, and Redcar East about a mile to the south-east serving the residential area (unofficially) named after the station.

There has been local speculation about the development of a new station serving the expanding residential area known as the Ings, supposedly situated between Redcar East railway station and Longbeck railway station in Marske-by-the-Sea, but so far no firm plans have been agreed.

On weekdays, trains run approximately every half-hour in each direction, towards Saltburn eastbound and Middlesbrough, Darlington and Bishop Auckland westbound. There are also two of early morning through trains to Newcastle upon Tyne that run via Darlington and on to the East Coast Main Line via Durham and Chester-le-Street. Trains are less frequent in the evenings and at weekends.

The main roads through the town are the A1085 and the A1042, with the A174 bypassing. Redcar is served primarily by Arriva North East buses, connecting Redcar with the surrounding towns and villages of Middlesbrough, Guisborough, Eston, Marske-by-the-Sea, New Marske and Saltburn-by-the-Sea.

The Pangea North and CANTAT-3 submarine telecommunication cables both come ashore between Redcar and Marske-by-the-Sea.

See also: List of schools in Redcar and Cleveland

In Coatham is Cleveland Golf Club, the first golf club to be formed in Yorkshire. It was established in 1887 and is a links course. Also in Coatham is Redcar Cricket Club, which play in the NYSD league, and Redcar Running Club. 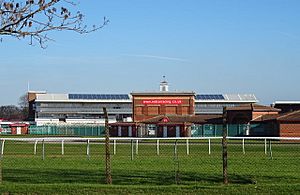 Redcar Racecourse is one of nine thoroughbred horse racecourses in Yorkshire. There is also a motorcycle speedway racing team, the Redcar Bears racing in the Premier League. The race track is at the South Tees Motorsport Park in Southbank Street, South Bank and is unusual in that one bend is more highly banked than the other. The team was formerly captained by 1992 World Champion Gary Havelock and is managed by his father Brian. A junior team known as the Cubs also race in the Conference League.

All content from Kiddle encyclopedia articles (including the article images and facts) can be freely used under Attribution-ShareAlike license, unless stated otherwise. Cite this article:
Redcar Facts for Kids. Kiddle Encyclopedia.