The population was 99,171 as of the 2010 Census. The city population and economic activity have grown exponentially in recent years due to the building of major distribution centers in the region.

It was formerly home to the U.S. Army Rialto Ammunition Storage point which was used during World War II to support operations in the Pacific theater. This area is now a Superfund Site that was scheduled to begin remediation in 2020.

Rialto is home to major regional distribution centers: Staples Inc., which serves stores across the entire West Coast of the United States, Amazon (company), Under Armour, Medline Industries, Niagara Bottling, Monster Energy and Target in the northern region of the city, in the Las Colinas community. One of the United States' largest fireworks companies, Pyro Spectaculars, is also headquartered in Rialto.

The particularly arid climate during the summer prevents tropospheric clouds from forming, meaning temperatures rise to what is considered Class Orange by NOAA. Rialto gets an average of 16 inches (410 mm) of rain, and maybe hail most of this rainfall precipitates in winter. During winter, Rialto's northern-most neighborhood gets snow, heavily at times as a result of its elevation of about 3,000 feet (910 m) above sea level. However, most of the city is out of snowfall's path.

The seasonal Santa Ana winds are felt particularly strongly in not only Rialto but the greater San Bernardino area as warm and dry air is channeled through nearby Cajon Pass at times during the autumn months. This phenomenon markedly increases the wildfire danger in the foothill, canyon, and mountain communities that the cycle of cold, wet winters and dry summers helps create.

According to the 2010 U.S. Census, Rialto had a median household income of $49,428, with 19.2% of the population living below the federal poverty line.

The City of Rialto is situated between Interstate 10 and Interstate 210. According to statistics approximately 55% of the working class in the city of Rialto commute more than 10 miles (16 km) to get to work and almost 13% travel to and from Los Angeles and San Bernardino. Average commute times from Rialto are between 33.6 and 37.6 minutes 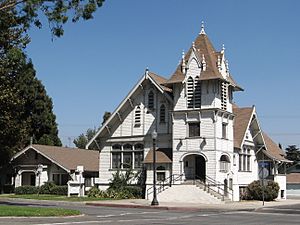 Ancient artifacts discovered by archaeologists suggest that what is now the city of Rialto was settled prior to 1500. Such artifacts, now found at the Rialto Historical Society, indicate that the Serrano Indians lived in the Rialto area between 1500 and 1800 AD. There is no indication as to where these Native Americans went or why.

An adobe building from the early 19th century which was used for many purposes over the years, is the oldest building still standing in Rialto and stands restored in Bud Bender Park, formerly known as "Lilac Park". The City of Rialto leases the house and a small portion of park land to the Rialto Historical Society for $1 annually.

In 1842, the Lugo family was granted the Rancho San Bernardino-a holding of 37,700 acres-which encompassed Rialto. In 1851, the Mountain Family purchased part of the Lugo family's Rancho San Bernardino, and claimed several other portions of the bench which later became known as Rialto. This claim was later amended by the United States Government, permitting them a smaller fraction of the initial purchase.

In 1887 a railroad connector line was built between San Bernardino and Pasadena by the Santa Fe Railroad. Along the line, townsites were located every 2,600 yards (2,400 m) [mile and a half] and by the fall of that year over 25 new towns were being built. This same year the Semitropic Land and Water Company was formed to organize the purchase and selling of real estate, water, and water rights and privileges.

In 1901 a cemetery was established in the township. It is administered by the City Treasurer. 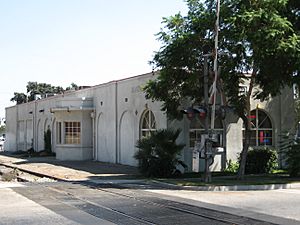 The Chamber of Commerce was established in 1907. The Chamber incorporated in the spring of 1911. By 1911 the population had grown to 1,500 with 40 businesses and a local newspaper. The election results on October 31 of the same year were 135 for the incorporation of the city and 72 against.

Foothill Boulevard was repaired in 1913 and became U.S. Route 66 a section of the U.S. highway system. In 1914 Los Angeles' Pacific Electric Railway completed its San Bernardino Line through the City of Rialto, with a junction at Riverside Avenue for the Riverside Line. Today the Tracks above First Street are a part of the Union Pacific and the Pacific Electric depot on Riverside Avenue is Cuca's Restaurant. 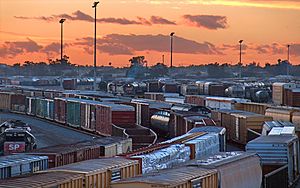 A fire in the 1920s swept through and destroyed many of the buildings in the downtown area.

In April 2014, the Rialto school district came under fire for homework assigned to about 2,000 8th graders a "critical thinking" writing assignment which asked them to take a position whether the Holocaust occurred, and to defend that position citing published arguments, including rebuttals to the selected arguments. Although the school system initially defended the December 2013 assignment, which had already been completed and graded by the time the media published the story, the board of the school district formally apologized for what its chairman called the "horribly inappropriate assignment".

In the late 1990s, local water officials discovered perchlorate contamination in the city's drinking water supply that contained as much as 800 times the recommended limit according to safety recommendations issued in other states.

The contaminant, which has seeped into several of the town's drinking water wells, is the subject of lawsuits by the city of Rialto against 42 parties, including Goodrich Corporation and Black & Decker, the US Department of Defense, and the San Bernardino County. Both companies, most likely under contract with the Department of Defense, operated weapons manufacturing facilities which used massive quantities of rocket fuel.

After many years of negotiations, Goodrich Corporation and Black & Decker still have not agreed to clean toxic waste from the environment in northern Rialto. Studies have shown that perchlorate consumption, at the levels measured in the affected wells, can lead to medical issues. Perchlorate exposure can harm iodine uptake into the thyroid.

With several other wells unusable due to contamination, the drought-prone city teeters on the brink of running out of water.

On September 13, 2005, the Rialto city council voted to dissolve the Rialto Police Department and replace it with a contract with the San Bernardino County sheriff's department. Soon after the vote, a San Bernardino County court issued an injunction on the change because the vote was done in secret. As a result, two city council members, Ed Scott and Winfred Lee Hansen, were up for recall. In March 2006, city leaders decided to keep the Police Department.

The local Interstate 210 between Alder Ave and Linden Ave has been filmed for movies and TV.

The movie Transformers, 2007 Fox television show, Drive, the freeway scenes in The Hangover, Due Date, and several commercials by UPS and car companies have been shot there.

The television show Fear Factor used a portion of the then uncompleted highway 210 in Rialto for a stunt.

In 1994, the Rialto Western Little League hosted the Southern California Championship for the Major Division, in which the winner went on to participate in the Regional Tournament. The winner was Northridge City Little League who went on to play in the Little League World Series in South Williamsport, Pennsylvania. The Tournament was held at Lilac Park, now known as Bud Bender Park.

The City of Rialto is situated between Interstate 10 and State Route 210. According to statistics approximately 55% of the working class in the city of Rialto commute more than 10 miles (16 km) to get to work and almost 13% travel to and from Los Angeles and San Bernardino. Average commute times from Rialto are between 33.6 and 37.6 minutes. 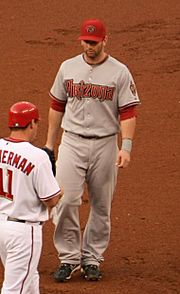 All content from Kiddle encyclopedia articles (including the article images and facts) can be freely used under Attribution-ShareAlike license, unless stated otherwise. Cite this article:
Rialto, California Facts for Kids. Kiddle Encyclopedia.