Richard Bache (1737–1811) worked for the Postal Service under Benjamin Franklin from 1775–1776, and was Franklin's successor as Postmaster General, serving from 1776–1782 during the Revolutionary War. He also served on the Board of War.

He was born in Yorkshire, England and married the only daughter of Franklin in 1767, after immigrating to New York City in 1765. His wife, Sarah Franklin Bache (1743-1808), was widely known for patriotism and benevolent activities.

Their son, Richard Bache Jr., served in the Republic of Texas Navy and was elected as a Representative to the Second Texas Legislature in 1847. Another son was Benjamin Franklin Bache (1769-1798). 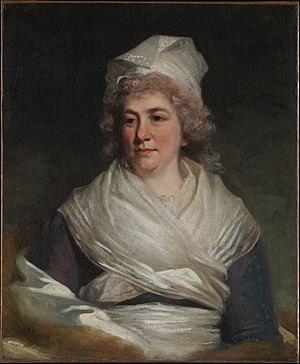 All content from Kiddle encyclopedia articles (including the article images and facts) can be freely used under Attribution-ShareAlike license, unless stated otherwise. Cite this article:
Richard Bache Facts for Kids. Kiddle Encyclopedia.