Richfield Springs is a village located in the Town of Richfield, on the north-central border of Otsego County, New York. The population was 1,264 at the 2010 census. The name is derived from some local sulfur springs.

The village is at the north end of Canadarago Lake and is at the border of Herkimer County, New York.

According to the United States Census Bureau, the village has a total area of 1.0 square mile (2.6 km2), all of it land.

There were 536 households out of which 22.8% had children under the age of 18 living with them, 47.0% were married couples living together, 9.7% had a female householder with no husband present, and 39.4% were non-families. 34.0% of all households were made up of individuals and 19.0% had someone living alone who was 65 years of age or older. The average household size was 2.27 and the average family size was 2.93.

Industrialist Cyrus McCormick from Chicago commissioned the famed New York architectural firm of McKim, Mead, and White to build a shingle-style "cottage" for him and his family on the edge of the village, on Warren Street, the estate would be known as Clayton Lodge. Built in 1882 the sprawling estate with stables and other outbuildings afforded him fresh air living in the summers. The grounds of the estate were landscaped by the foremost designer, Frederick Law Olmsted. The mansion was razed in 1957, but the shingle style stable, albeit altered, is extant today. 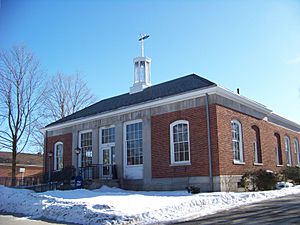 Neighboring McCormick's estate, also on Sunset Hill, was the residence of Eugene D. Stocker. His estate, complete with main house, guest house, and stable, was designed by architect Dwight James Baum in 1923. It is extant today and for tax purposes it resides in the Town of Warren, in Herkimer County New York. The Stocker estate, named "Sunset Hill" was listed with the National Register of Historic Places January 4, 2007. The Richfield Springs Post Office was listed on the National Register of Historic Places in 1989.

All content from Kiddle encyclopedia articles (including the article images and facts) can be freely used under Attribution-ShareAlike license, unless stated otherwise. Cite this article:
Richfield Springs, New York Facts for Kids. Kiddle Encyclopedia.