Kids Encyclopedia Facts
For the town formerly of this name, see Richland, California.

Richvale (also, Richland, Silbys Switch, Silsby) is a small census-designated place (population 244) in Butte County, California, US, south of Chico and west of Oroville. The primary crop grown in the area surrounding Richvale is rice, irrigated from the Oroville Dam on the Feather River. Several farmers in the area are known for organic farming. The population was 244 at the 2010 census. 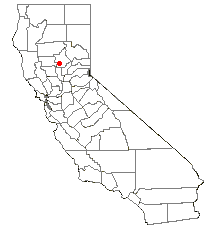 Legend says that the name "Richvale" (meaning "fertile valley") was coined by con men to sell worthless plots of land to wheat farmers from Nebraska and Kansas. The developers (Richvale Land Company) changed the name from Selby Switch (a railroad siding) to Richvale in 1909. The place was settled in 1911, and a post office opened that same year.

Farmers in the Midwest were shown lush pictures of California's San Joaquin Valley and Central Valley and sold land at outrageous prices. The soil near Richvale is nothing like the fertile soil of the San Joaquin Valley, being composed mostly of clay instead of loam. The dominant soil is Esquon clay, a poorly drained vertisol. The locals call the soil "adobe" due to its high clay content. The land is unsuitable for vineyards, orchards, and most other crops. Some buyers took one look at the soil and returned to the Midwest. Those who stayed built a community from the muddy ground up: a post office (1912), roads, an irrigation and drainage district, a hotel (1913), a church (1913), a cooperative (1914 and still operating, the Butte County Rice Growers Association), a school (1914), and a grocery store (1920). During a second wave of migration Dust Bowl farmers came west during the Great Depression.

Due to the adobe soil's ability to retain water and remain flooded, the ground makes a near-ideal rice paddy, and rice has become the primary crop of the area. Irrigation is provided by surface water from the plentiful Feather River.

In 2005, 33,500 acres (136 km2) of rice were served by Butte County Rice Growers Association. Current storage capacity is 3,200,000 short hundredweight (150,000 t). With time and a lot of hard work, the town of Richvale lived up to its name as rice farming provided an abundant livelihood for the original settlers and their offspring.

The history of Richvale was recently written by the Richvale Writing Group (with Teresa Ward) and published by The Community Foundation of Richvale in a book (Richvale: A Legacy of Courage, Dedication, and Perseverance) with 364 historical photographs.

All content from Kiddle encyclopedia articles (including the article images and facts) can be freely used under Attribution-ShareAlike license, unless stated otherwise. Cite this article:
Richvale, California Facts for Kids. Kiddle Encyclopedia.