Rivers State is one of the 36 states of Nigeria. At the 2006 census, the state had a population of 5,185,400. It is the sixth-most populated state in the country. The capital and largest city is Port Harcourt. It is also the centre of Nigeria's petroleum industry.

Many indigenous peoples live in Rivers State. They include Ikwerre, Ijwa, Etche, Ogba/Egbema, Ogoni and others.

Rivers State is a predominantly low-lying pluvial state in southern Nigeria, located in the eastern part of the Niger Delta on the oceanward extension of the Benue Trough. The inland part of the state consists of tropical rainforest, and towards the coast, the typical Niger Delta environment features many mangrove swamps. Rivers State has a total area of 11,077 km2 (4,277 sq mi), making it the 26th largest state in Nigeria. Surrounding states are Imo, Abia and Anambra to the north, Akwa Ibom to the east and Bayelsa, Delta to the west. On the south, it is bounded by the Atlantic Ocean. Its topography ranges from flat plains, with a network of rivers to tributaries.

Rainfall is generally seasonal, variable, as well as heavy, and occurs between the months of March and October through November. The wet season peaks in July, lasting more than 290 days. The only dry months are January and February having little to no effect.

The land surface of Rivers State can be divided into three zones: freshwater swamps, mangrove swamps and coastal sand ridges. The freshwater zone extends northwards from the mangrove swamps. This land surface is generally less than 20m above sea level. As a lower Niger floodplain, it contains a greater silt and clay foundation and is more susceptible to perennial inundation by river floods. The floodplain's total thickness rises to about 45m in the northeast and over 9m in the beach ridge barrier zones to the southwest.

On coastal sand ridges, the soils are mostly sandy or sandy loams. Various crops are supported including coconut, oil palm, raffia palm and cocoyam. The drier upland region of Rivers State covers 61% of landmass while the riverine areas, with a relief range of 2m to 5m, take up 39%. 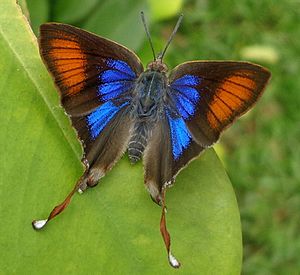 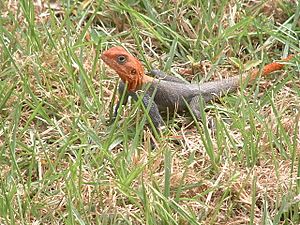 Due to its geographical location, Rivers State has always played an important role in the natural history of Nigeria, having been found to host a vast array of wildlife and plants. Its tropical rainforests are home to more species than all other local biomes combined thanks to its climate and canopy structure. Unfortunately, some of the upland forested areas have seen disruption from human activity, impacting negatively on the biodiversity and ecological functions of natural habitats. In most places, the dominant vegetation usually consists of Elaeis guineensis which has the highest productivity amongst all recognized oleaginous crops.

The riverine part of the state has three hydro-vegetation zones such as beach ridge, salt water and fresh water. Each zone has its own characteristics and composition, with the freshwaters encompassing the upper and lower floodplains of the Niger Delta.

Finima Nature Park is a protected area and forest reserve in Bonny Island covering an area of approximately 10 km2 (3.9 sq mi). The park's vegetation has progressively developed into a high forest considering the form from which it began in 1999. There are two storeys that can be distinguished from outside the forest.

The interior of the forest is very shady, and as a result there are a wide variety of shade tolerant plants and various sedges form thickets on the forest floor. By dry season, large cushions of plant litter cover the floor.

One of the world's Ramsar Convention-listed wetlands, Upper Orashi Forest, is a 252 km2 (97 sq mi) protected area in Ahoada West. It has been identified by BirdLife International as an IBA because of its importance to global populations of grey parrots and other birds.

The Biseni Forest in the north west of Ahoada and west of Upper Orashi Forest have also been designated an Important Bird Area. The forest has an area of 219 km (136 mi) within which mammals like red-bellied monkey and yellow-backed duiker are found along with raffia palms. 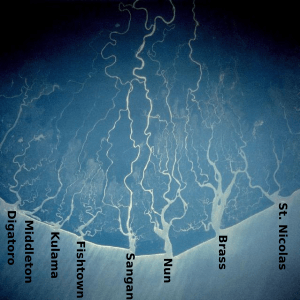 Satellite view of Niger Delta. Nun River in the center

The state has many rivers, some of which include:

Rivers State has higher literacy rate compared to most states in the South South geopolitical zone. 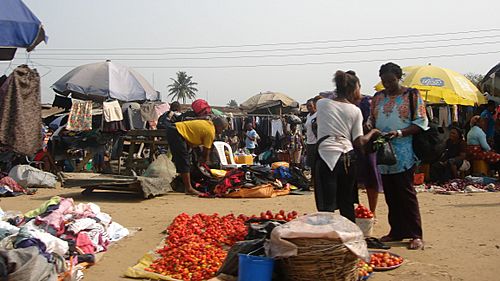 A market in Igwuruta, Rivers State

Rivers State has maintained its importance as a leading supplier of wealth to the nation for centuries. In 2007, the state ranked 2nd nationwide with a gross domestic product (GDP) of $21.07 billion and a per capita income of $3,965.

The state is famous for its vast reserves of crude oil and natural gas. It was perhaps the richest and most important section of the African zone of the British Empire. Rivers State has two major oil refineries, two major seaports, airports, and various industrial estates spread across the land. More than 60% of the country's output of crude oil is produced in the state. Other natural resources found within its boundaries are silica sand, glass sand and clay.

Prior to the discovery of oil in commercial quantity in 1951, Agriculture was the primary occupation of the people of Rivers State.

Around the 19th century when the industrial revolution reached its peak in England, the area was then referred to as Oil Rivers Protectorate, this was due to its abundant palm oil and kernel which basically constituted the main revenue source of the country.

In a sample survey carried out by the Federal Ministry of Agriculture and Natural Resources, about 40% of the rural inhabitants were committed to farming in 1983. Rivers State is one of the leading states in the production of yam, cassava, cocoyam, maize, rice and beans. About 39% (760,000 hectares) of the state's total land mass, particularly in the upland area, is suitable for cultivation.

Major cash crops produced are oil palm products, rubber, coconut, raffia palm and jute. Other crops grown for food include vegetables, melon, pineapples, mango, pepper, banana and plantain. The fishing industry is an important sector in Rivers State. Besides being lucrative, fishing is also a favourite past time activity. There are approximately 270 species of fish existing; with many artisanal fishermen in the riverine areas. The state provides valuable seafood such as crabs, oysters, shrimps and sea snails among others. Vertebrates like birds, mammals and reptiles are also found in the region.

All content from Kiddle encyclopedia articles (including the article images and facts) can be freely used under Attribution-ShareAlike license, unless stated otherwise. Cite this article:
Rivers State, Nigeria Facts for Kids. Kiddle Encyclopedia.