Rodney is a former city in Jefferson County in southwest Mississippi, approximately 32 miles (51 km) northeast of Natchez. Rodney was founded in 1828, and in the 19th century, it was only three votes away from becoming the capital of the Mississippi Territory. Its population declined to nearly zero after the Mississippi River changed course. The Rodney Center Historic District is listed on the National Register of Historic Places.

Today a small number of inhabitants remain but the area is considered a ghost town and reliable data is hard to find as the town is not listed as a separate entity by the census bureau.

Rodney was originally settled by the French in January 1763 and named Petit Gouffre, meaning "Little Gulf". As a result of the French and Indian War, the area was taken by Great Britain. Spain would later control this area after taking West Florida from the British in 1781. Spain would hold the site until selling it to Thomas Calvit in 1798. The city was later renamed Rodney in 1828 in honor of Judge Thomas Rodney. 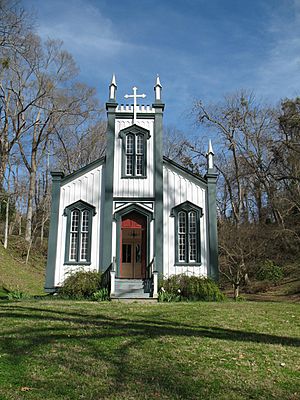 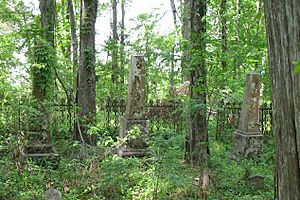 The Old Rodney Presbyterian Church was dedicated in 1832. It is located at the middle section of the town, across the Rodney – Red Lick – Lorman Road from Alston Grocery Store. Formerly at the south edge of the town was Sacred Heart Catholic Church, built in 1869. On the southeast corner of Rodney lies Alston's Grocery, operated by the Alston family since 1915.

Alston's Grocery Store, actually a country general store, closed many years ago but the building still stands. In the northeast corner of the town is a small park where regular band concerts were held by the Jefferson County Band. On the northwest corner are remains of a wooden drugstore. West of Alston's Grocery is the one surviving structure on Batchelor Street. Located at the southwest corner is a two-story brick structure. At the western end of Batchelor St. is Mt. Zion No. 1 Baptist Church, a white frame structure combining several styles of architecture which was constructed in 1850. The Presbyterian Church has a solid shot above the middle window which appears to have been fired by a 12 lb. Napoleon. It hit the facade of the church when a group of officers from the USS Rattler decided to attend services one Sunday and a unit of Confederate cavalry from Grand Gulf began the process of arresting them all as prisoners of war. Shooting started and the Rattler returned fire striking the Church (Note: The shell one sees lodged in the facade of the church today is not the original round. That particular missile has been lost to history. The current round, cemented in place for safety, was placed there during a restoration in the 1990s). The minister, a known Union sympathizer, left town shortly thereafter.

The 1850 United States Census listed the population of Rodney as 210.

In June 1863, forty Union hand-picked cavalry troops of the 5th Illinois Cavalry under the command of Captain Calvin Mann, were disembarked in Rodney to launch a surprise raid across the state to the Confederate-controlled Mobile and Ohio Railroad in Alabama. The Confederates, pursuing them after their raid on Brookhaven and the New Orleans, Jackson and Great Northern railroad facilities there, would later capture the Union troops at a skirmish near Rocky Creek outside of Ellisville, Jones County, Mississippi on June 26, 1863.

After the fall of Vicksburg, the Union Navy was in charge of the Mississippi River. The gunboat Rattler was stationed in front of Rodney to ensure the federal control of this important town, and aware that the area was not completely secure, the admiral left strict orders that no sailor was to leave the ship. But on Sunday September 12, 1863, 22 sailors, contrary to these orders, a lieutenant, and a captain left the ship dressed in their best uniforms, and quietly seated themselves amongst the Presbyterian Church congregation. As the second hymn was being sung, a Lt. Allen of the Confederate Cavalry walked up the aisle to the pulpit. Apologizing to the Reverend Baker, he turned and announced that his men had surrounded the building and demanded the Yankee sailors surrender. One of the Yankee sailors jumped behind a door and took a shot at Lt. Allen. A general melee broke out, and most of the citizens dove under their pews for safety and reputedly one Yankee sailor hid in the undergarments of his local southern girlfriend. One older lady, however, would not run. She stood up in her pew and shouted "Glory to God!" A skeleton crew had remained on board the Rattler, and, when they heard the commotion, began firing their guns at the church. The church and four homes were hit. The firing ceased once word was sent that the Confederates threatened to execute the prisoners. It was on this day that a cannonball lodged itself in the front wall of the Presbyterian Church. The Confederate Army had taken 17 prisoners, including the lieutenant and captain. The crew of the Rattler became the laughingstock of the nation, for it was the first time in history a small squad of cavalry captured the crew of an ironclad gunboat. (Local history tells us that the cannonball that is imbedded very high up in the front of the Church was placed there many years later. The original one had fallen out. Photos of the church in the 1930s [the one on this site] show no cannonball in the front of the church) To eliminate all Confederate presence in Rodney, Union infantrymen landed in Rodney and plundered almost every house in town. Citizens of Rodney later formed Company D. 22nd Mississippi infantry to fight against the Union army.

Early maps dating back to 1715 suggest that the site where Rodney stands today was originally a location where local Native Americans crossed the Mississippi. The Rodney area has long been regarded as an important place for crossing the Mississippi River. Crossing the Mississippi was a major problem until the construction of bridges in the 1930s. Rodney was also said to be the one of the early crossings for the Spanish colonial trade route El Camino Reale.

All content from Kiddle encyclopedia articles (including the article images and facts) can be freely used under Attribution-ShareAlike license, unless stated otherwise. Cite this article:
Rodney, Mississippi Facts for Kids. Kiddle Encyclopedia.