Ross is a village in the Midlands of the state of Tasmania in Australia. On the Macquarie River, Ross is located 78 km south of Launceston and 117 km north of Hobart. The town is listed on the Register of the National Estate and is noted for its historic bridge, original sandstone buildings and convict history.

The town of Ross lies in lands that were traditionally owned by Tasmanian Aborigines, specifically the Tyrernotepanner (Stony Creek) Nation. The aboriginal name for the area that now constitutes the Ross township was mackerler (Mack-er-ler).

I named our last Night's Station "Ross", in honor of H. M. Buchanan Esqr. – that being the name of his Seat on Loch-Lomond in Scotland; this part of Argyle Plains on the Right Bank of the Macquarie River being very beautiful and commanding a noble view.

Later that year, a timber bridge was built over the river and subsequently Ross became an important stopover on road journeys between Launceston and Hobart. It developed as a base for the local garrison and became a centre for trade for the surrounding district. Between 1848 and 1854 approximately 12,000 female convicts passed through the Female Factory.

By the time of Australian Federation in 1901, the permanent population had grown to 311 and the wider area had become known as a fine wool growing district. At this time Ross had four churches, a post and telegraph office, a savings bank, one hotel, and a town hall and library.

The Four Corners of Ross

The town is centred on the crossroads of Church and Bridge Streets with a field gun from the Boer War and a war memorial as a central part of the intersection. The crossroads area is humorously referred to as the "Four Corners of Ross" with each corner having a label: 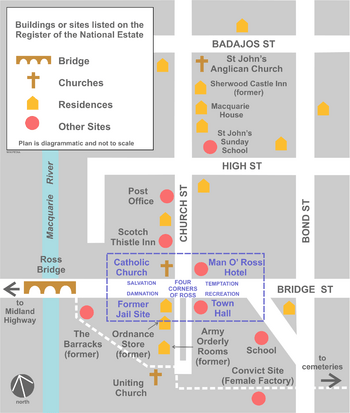 Heritage-listed buildings and sites in Ross

The town of Ross itself is listed on the Register of the National Estate and many of the town’s historic buildings, many built from sandstone, are listed in their own right.

The former Army Orderly Room is a stone Colonial building which was the first army headquarters in Ross. Nearby is the Royal Ordnance Corps Store, which was erected in 1836 and has the corps crest carved above the door. This building now houses the Ross Memorial Library and Recreation Room.

The Council Clerk's cottage, situated on the south-west corner of Church and High Streets is a single storey Georgian building. The western wing of this building incorporates the former police buildings. A jail also stood on this site.

Near the Ross Bridge stands the former military barracks, a single-storey Colonial building which has been recently restored.

The convict site dates back to the 1840s. Usually referred to as the Female Factory, it was one of only a few female convict compounds in Australia. There is one remaining building on the site, the Assistant Superintendent's Quarters, which currently houses a display relating to the site. 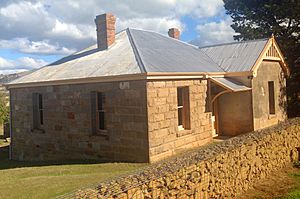 The town of Ross has three churches, all located on elm-lined Church Street. The Uniting Church, situated prominently on the hilltop, was built in 1885 and is noted for its blackwood pews and carved baptismal font. The Roman Catholic Church building was originally a store and was converted in the 1920s in Gothic revival style. St John's Anglican Church, on the corner of Badajos Street, was built in 1868 and contains a 100-year-old pipe organ, an oak lectern and a stone pulpit. 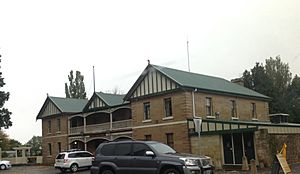 The Man O' Ross Hotel was built in 1831 by William Sadler. It was originally a two-storey Georgian building, but was later converted to a Victorian Style. Two former inns, The Scotch Thistle Inn (licensed 1840) and the Sherwood Castle Inn, no longer function as hotels, the former is now a private residence and the latter has been renamed and operates as the Ross Bakery Inn.

The well-known sandstone bridge was constructed by convict labour in 1836, and is the third oldest bridge still in use in Australia. Commissioned by Lieutenant-Governor Arthur, the bridge was designed by architect John Lee Archer, with the convict work team including two stonemasons, James Colbeck and Daniel Herbert, the latter being credited with the intricate carvings along both sides of the bridge.

The main cemetery, located to the south-east of the town centre, is divided into two sections - a Roman Catholic section and a Church of England section which is enclosed by a stone wall. The old military burial ground is located on a nearby hilltop.

The Town Hall is a neo-classical style late-Victorian building. The adjoining Council Chambers is a timber building with a stone façade. The Post Office was completed in 1889 and has a verandah with twin cast-iron columns. The schoolhouse is a Victorian Rustic Gothic building with random rubble sandstone walls.

Within the central township area, there are a number of other buildings including private residences and two former Sunday Schools that are also listed on the register. In addition, a number of listed indigenous and other sites are located in nearby areas.

The Tasmanian Wool Centre is a building which houses a museum, a wool exhibition, a wool and craft area and acts as the tourist information centre.

Tooms Lake was built as a water supply dam for Ross.

A bakery in Ross has become a point of interest for anime fans, as it is supposed to bear a resemblance to the bakery in the 1989 Studio Ghibli animated film Kiki's Delivery Service. An attic room above the bakery has been modified to look like the title character's bedroom.

All content from Kiddle encyclopedia articles (including the article images and facts) can be freely used under Attribution-ShareAlike license, unless stated otherwise. Cite this article:
Ross, Tasmania Facts for Kids. Kiddle Encyclopedia.