Royal Garrison Church of All Saints is a Church of England church in Aldershot Garrison, England. It was built in 1863 and designed by the architect P. C. Hardwick. The building is constructed in the Gothic Revival style using English bond red brick, hence its nickname of "the Red Church". It is the 'home' church for the Anglican military personnel serving in Aldershot. It is a Grade II listed building.

History of the Garrison Church

The Church is approached by way of Old Contemptibles Avenue

In January 1854 some 25,000 acres of Aldershot Heath were purchased with the view to setting up a permanent military camp in the area. The outbreak of the Crimean War later in the same year led to a military mobilisation and in 1855 12,000 huts were constructed in the Aldershot area to house the 20,000 militia who had been called up.

It was soon apparent that the size of Camp that Aldershot had become by this time would need a Church, so a small iron building was commissioned; this was the only Church in the Camp at Aldershot from 1855 until 1863 and was on the site now occupied by the Garrison Church of St Andrew on Queens Avenue. When Parliament decided to make Aldershot a permanent Camp in 1857 a new site was chosen for the building of a permanent Garrison Church near to the Royal Pavilion, and this is the Garrison Church we see today. The architect was Philip Charles Hardwick (1822-1892), who designed a red-brick structure in the Gothic Revival style. The Church measures 143 feet in length and is 68 feet wide and can seat 1,250 worshippers. The spire is 170 feet tall and is a local landmark.

The Church was consecrated by the Charles Richard Sumner, The Bishop of Winchester on 29 July 1863. The church was Grade II listed in 1973.

Today the Church is approached by way of Old Contemptibles Avenue, so named after the Old Contemptibles who attended an annual service at the Church for many years and who would then parade out of the Church along this avenue and down to Wellington Avenue opposite. The Avenue was opened by Major-General Ronald Bramwell-Davis, General Officer Commanding Aldershot District on 24 August 1958, the 44th anniversary of the Battle of Mons.

The Royal Army Dental Corps Chapel is in the south west corner of the Church with an altar frontal in green with the beautifully embroidered past and present badges of the Corps thereon. St Michael's Chapel - the Warrior's Chapel - is surrounded by a very fine screen. 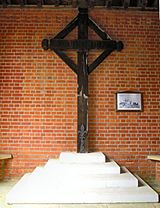 Located in the south porch is a large cross, about nine feet high and made of dark wood. The inscription on the cross reads: "In memory of the Officers, SNCO's and Men of 1st Division killed in action near High Wood during September 1916 - RIP".

The 1st Division went into action at High Wood in September 1916 and over the next few days saw some of the bloodiest hand-to-hand fighting during the Battle of the Somme which left the trenches thick with British and German dead. After the battle the 1st Division engineers put up a memorial cross at High Wood using wood taken from the ruins of Bazentin village. As after the War there was a permanent stone memorial to the 1st Division at Le Cateau the cross at High Wood had to be removed or left to decay; instead, it was brought back to the UK.

The biggest stained glass window in the church, it was commissioned by the 37th Hampshires to commemorate the officers, non-commissioned officers and men of the regiment who had been killed during the Indian Mutiny of 1857 to 1859. It was designed in the Geometric style of architecture as found in churches built during the period c.1307-1337. The central panel shows the Resurrection with Christ emerging victorious from his tomb carrying a flag to symbolise his victory over death. The two panels on the left show Joshua while the two on the right depict Gideon.

Both the main altars at the east end of the church are of wood and were originally without any form of hangings. The carving on the front of the main altar is very fine; it was presented to the Church by the All Saints Branch of the Guild of St Helene. The various frontals and hangings used on the altar throughout the Church Year have been received from various donors.

The organ was built by Brindley and Foster in 1900, and is the second instrument to stand in the Church. It has 1749 pipes and three manuals and pedals and eighteen speaking stops, with provision for another twenty-two stops which have subsequently been added plus an additional three. The gilded pipes on the north aisle screen are only dummies, and are not connected to the organ in any way. 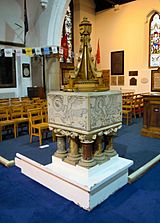 The carved oak pulpit is a memorial to Sir James Alleyn, RA and dates to 1899. In the four quatrefoils at the base of the pulpit are the traditional symbols of the Four Evangelists: the eagle for St John; the lion for St Mark; the bull for St Luke, and the angel for St Matthew.

The font is rather plain and heavy in design but is unusual in that, unlike most fonts, it is square in shape. On the outside are the symbols of the Four Evangelists with their names in Latin: Sanctus Joannes, Sanctus Marcus, Sanctus Lucas and Sanctus Mattheus.

Since 1967 the church has been the "spiritual home of The Paras". All the soldiers from the regiment who died during World War II are remembered with their own individual kneeler. 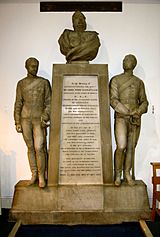 All content from Kiddle encyclopedia articles (including the article images and facts) can be freely used under Attribution-ShareAlike license, unless stated otherwise. Cite this article:
Royal Garrison Church, Aldershot Facts for Kids. Kiddle Encyclopedia.