Royal Wootton Bassett formerly Wootton Bassett, is a small market town and civil parish in Wiltshire, England, with a population of 11,043 in 2001, increasing to 11,385 in 2011. Situated in the north of the county, it lies 6 miles (10 km) to the west of the major town of Swindon and 10 miles (16 km) northeast of Calne.

From 1447 through 1832 Wootton Bassett was a parliamentary borough which elected two Members of Parliament (MPs) to the House of Commons. In 1832 it was deemed a rotten borough and abolished by the Great Reform Act.

The town was granted royal patronage in March 2011 by Elizabeth II in recognition of its role in the early-21st-century military funeral repatriations, which passed through the town. This honour was officially conferred in a ceremony on 16 October 2011 – the first royal patronage to be conferred upon a town (as distinguished from a borough or county) since 1909. 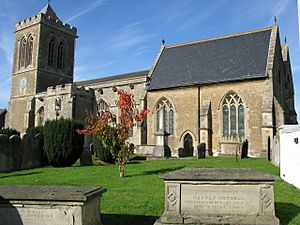 St Bartholomew and All Saints church

AD 681 is usually taken as the starting point for recorded history of Wootton Bassett, then known as Wodeton, it being referred to in that year in a Malmesbury Abbey charter granting land to the Abbot.

Archaeological discoveries in the area tend to confirm the tradition that the original "Wodeton" (Settlement in the wood – i.e. in Bradon Forest) was near the present Dunnington Road. Allegedly under continuous occupation throughout Celtic and Romano-British periods, the land was granted in 681 AD to Malmesbury Abbey. Further grants of land nearby appear in the records from time to time, but of Wodeton itself we hear no more until it was sacked by the marauding Danes in 1015, whereupon the survivors decided to move uphill to the site of the present High Street.

Wootton Bassett is mentioned in the Domesday Book where it was noted that Miles Crispin held the rights and these included "land for 12 ploughs...a mill...and 24 acres (9.7 ha) of meadow...33 acres of pasture and woodland which is two leagues by a league". It was said to be worth nine pounds.

In the early 21st century, the town became known for the informal tributes it paid during military repatriation funeral processions which passed through the town. On 16 March 2011, Prime Minister David Cameron announced, at the start of Prime Minister's Questions, that while "from September, military repatriations will no longer pass through the town of Wootton Bassett", "Her Majesty has agreed to confer the title 'Royal' upon the town, as an enduring symbol of the nation’s admiration and gratitude". The addition to the town's name was enacted through Letters Patent and became effective on 16 October 2011, when The Princess Royal visited the town to present formally the Letters Patent to the town council. Royal Wootton Bassett has become the third Royal town in the country after Royal Leamington Spa and Royal Tunbridge Wells, and the first to receive the status in over 100 years. 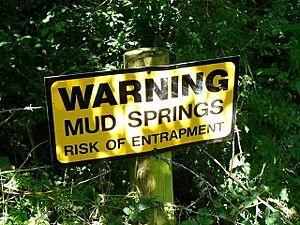 Sign warning of the risk of entrapment in the Mud Springs

Suburbs of Royal Wootton Bassett include Noremarsh, Coped Hall, Woodshaw and Vastern (a small hamlet to the south). Bishop Fowley is shown, on the Andrews' and Dury's Map of Wiltshire, 1810 as being an outlying hamlet SW of the town; the location is now known as Vowley Farm. The Wootton Bassett Mud Spring is a 8,000 m2 (86,000 sq ft) geological Site of Special Scientific Interest, which was notified in 1997. 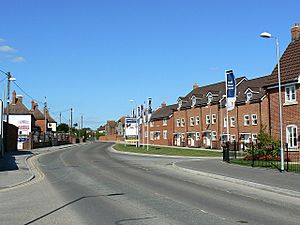 The United Kingdom Census 2001 recorded the town's population as 11,043, indicating that the town tripled in population total during the previous 50 years. Since the opening of the M4 motorway, the town has become attractive to commuters, many travelling to the towns and cities of Swindon, Chippenham, Bath and Bristol. The town also has a significant Royal Air Force population due to its proximity to RAF Lyneham. 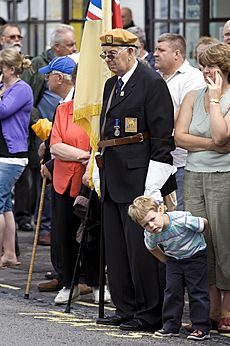 Typical group of mourners with a veteran acting as flag bearer 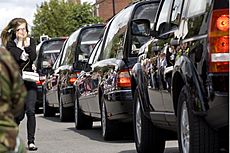 From April 2007, the bodies of servicemen and women of the British Armed Forces killed in Iraq and Afghanistan were repatriated to RAF Lyneham 4.5 miles (7.5 km) to the south. The bodies would then be transported to John Radcliffe Hospital, Oxford, in coffins covered with a Union Flag, passing through the town on their way. In the summer of 2007, local members of The Royal British Legion became aware of the repatriation, and decided to formally show their respect to the soldiers as they passed through their town. This led to other people assembling along the route, with large gatherings of sometimes over 1,000 people. After Brize Norton was repaired, the RAF continued to use Lyneham because the "people of Wootton Bassett had done such a lot to lend their support, it was felt it would be insensitive to transfer the process back to Brize." When RAF Lyneham closed in September 2011, the repatriations moved to RAF Brize Norton and go near to the village of Carterton.

In October 2008, an Armed Forces parade was held in the town. On Friday 29 January 2010 the town was visited by The Prince of Wales and his wife The Duchess of Cornwall, to lay a wreath at the War Memorial and meet local people. On 21 December 2009, Prince William presented the town with one of The Sun's "Millie" awards for Support to the Armed Forces, stating "One of the most remarkable things is that the people are so modest, they refuse to accept any praise".

Calls for the town to have Royal status bestowed on it had emerged in September 2009 and, while in the form of petitions and social media campaigns there had been public support for both the Royal title and other forms of national expressions of thanks at the time, local figures were less keen on the idea. South Wootton Bassett councillor Chris Wannell and Wootton Bassett Mayor Steve Bucknell both thought that it was not what local people would want, preferring to just honour the dead with no expectation of thanks.

Other tributes have included a public mass charity motorcycle parade through the town in March 2010, which also raised £100,000 for the charity Afghan Heroes. In 2011, the community of Royal Wootton Bassett themselves made a less sombre tribute as they came together over 5 months to re-record the classic Green Day track, "Wake Me Up When September Ends" from their American Idiot album, in aid of military charities. The project was called "Wootton Bassett Rocks", and its aim was to raise £1million for four charities: The Royal British Legion, Combat Stress, The Undentable Trust, and Soldiers, Sailors, Airmen & Families Association (SSAFA). The single was made available for download and on DVD in November 2011. It climbed the rock charts in several countries.

In 2009, the EDL visited Wootton Bassett, after controversial plans for a demonstration in the town by the Muslim extremist group Islam4UK, led by Anjem Choudary, came under widespread condemnation. The group eventually called off the plan, claiming that the publicity generated had "successfully highlighted the plight of Muslims in Afghanistan" and so "no more could be achieved even if a procession were to take place".

An official coat of arms was granted to Wootton Bassett Town Council, by Letters Patent of Garter, Clarenceux and Norroy and Ulster Kings of Arms, on 30 August 2011, the day before the date of the Queen's Patent granting the designation "Royal" to the town. The town had previously used unofficial Arms consisting of a chevron between three lozenges: the granted design adapts this to reflect the Royal favour accorded in recognition of Wootton Bassett's role in recent repatriations of fallen servicemen and women. The new coat of arms of Royal Wootton Bassett is: Gules a Chevron Argent between in chief two Lozenges and in base a Lion passant guardant Or. The lion passant is a visible heraldic sign of the royal favour.

The main road through the town is the A3102 road, which connects it to Swindon to the east and Melksham to the south west, a town in the west of the county. The only other numbered road out of the town is the B4042 road, which runs to Malmesbury in the west. Opened in 1971, the town is also close to Junction 16 of the M4 motorway connecting London with South Wales, allowing easy access to other towns and cities of the M4 corridor. 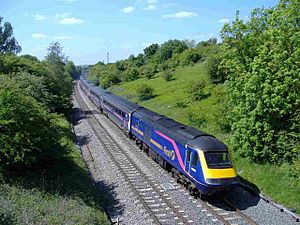 Royal Wootton Bassett has no railway station, although it has been served in the past by three railway stations, and is a major junction on the rail network, being the location where the South Wales Main Line branches off of the Great Western Main Line. As such, stations nearby offer direct connections to London, the South West and South Wales.

The first station to serve the town was Wootton Bassett Road, opened by the Great Western Railway (GWR) in 1840 some distance from the town (sometimes referred to as Hay Lane), when the Great Western Main Line from London Paddington reached the town. After just a year, with the completion of the Box Tunnel allowing the line to reach Bristol Temple Meads, this was replaced by the closer Wootton Bassett railway station. In 1903, after the new South Wales branch opened, the station was demolished and rebuilt as Wootton Bassett Junction at the junction of the two lines. British Railways closed that station in 1965. There have been on-going attempts to re-open a station in the early 21st century. Commuters wishing to use train services would have to travel to Swindon or Chippenham for regular services to London and the West Country. 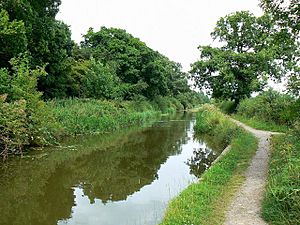 The town has an Arts Festival celebrating music, speech and drama with events in June and November.

Wootton Bassett Theatre was formerly located next to the Red Lion Pub, but is now at the Angel Hotel, and teaches classes as well as putting on performances.

In football, the town is represented by Wootton Bassett Town F.C. who play their home games at the 2,000-capacity Gerrard Buxton Sports Ground in Rylands Way. As of the 2010–11 season, the club was competing in the Hellenic Football League Premier Division.

The Wootton Bassett Museum is the former town hall, which is an upper storey supported on 15 pillars. It was built at the end of the 17th century, a gift from the Hyde family (Earls of Clarendon). 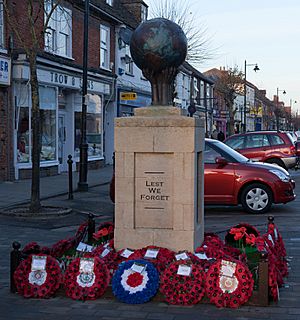 The town previously had war memorials in the form of a memorial garden in the cemetery and the memorial hall on Tinker's Field. In October 2004 a new memorial was unveiled in the town, a simple pedestal topped by a bronze of hands holding up a globe. The opening was the culmination of a five-year publicity and fund raising campaign, initiated by local resident Jay Cunningham who felt that the garden and hall were not prominent enough. The design of the memorial was by Lance Corporal Alan Wilson of the Wootton Bassett army cadets, chosen by public vote, and then sculpted by local artist Vivian ap Rhys Price.

All content from Kiddle encyclopedia articles (including the article images and facts) can be freely used under Attribution-ShareAlike license, unless stated otherwise. Cite this article:
Royal Wootton Bassett Facts for Kids. Kiddle Encyclopedia.