Royalston is a town in Worcester County, Massachusetts, United States. The population was 1,250 at the 2020 census. 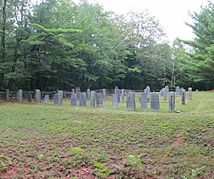 Newton Cemetery, one of several Royalston cemeteries - this one is located near the trailhead to Royalston Falls.

Royalston is a small town in the North Quabbin area of northwestern-central Massachusetts. It was named after Isaac Royall, a slaveholder and businessperson from Medford, Massachusetts who founded the town in a land deal in 1765. It is very large in land area—about 42.5 square miles (110 km2)—though it has a population of fewer than 1,300. Many of the surrounding towns like Warwick and Richmond are also very small. Most of the town's land is forest and wetlands, and there are several reservations and wildlife management areas. Two notable reservations are the Tully Lake flood protection dam area in the very southwestern part of the town, and the Royalston Falls reservation in the northern section. The largest population center in the town is the village of South Royalston in the southeastern corner of the town. This village contains the town's only store, a small convenience store and deli, and its only restaurant. The center of town is also a small village that contains a very well preserved classic colonial New England town center and common. The center of town contains the town hall, post office, congregational church, and the town's library. 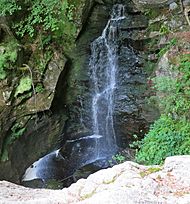 Royalston Falls are reached on a 0.8 mile descending pathway from the trailhead on Route 32. 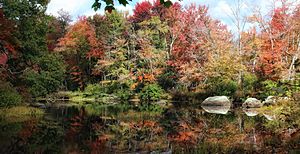 According to the United States Census Bureau, the town has a total area of 42.5 square miles (110 km2), of which 41.9 square miles (109 km2) is land and 0.6 square miles (1.6 km2), or 1.39%, is water. Royalston is located in the northwestern part of central Massachusetts, on hilly land. The town center lies near Frye Hill, which quickly slopes downward just west of the town center, into the Tully River valley. The Tully River empties through Long Pond and Tully Lake before flowing into the Millers River in neighboring Athol, downstream from where that river flows through the southeast corner of town. Several other brooks cross through the town, with some of the land along these brooks being marshlands. To the northwest, White Hill (1,361') rises near the Warwick town line, and is the highest point in the town. Notable is the Royalston Falls located off of Route 32 near the New Hampshire border. Royalston is home to several wildlife management areas, including Birch Hill, Millers River, Lawrence Brook and Fish Brook, the first two of which cover three substantial portions of the eastern half of town. The town also has two portions of state forest near West Royalston.

Royalston is the northwestern corner of Worcester County, bordered by Franklin County to the west and Cheshire County, New Hampshire, to the north. It is bordered by Athol to the south, Phillipston and Templeton to the southeast, Winchendon to the east, Richmond and Fitzwilliam, New Hampshire to the north, and Warwick and Orange in Franklin County to the west. The town center lies 24 miles (39 km) west-northwest of Fitchburg, 38 miles (61 km) northwest of Worcester and 68 miles (109 km) northwest of Boston. The town is mostly divided into three villages, the central village, West Royalston and South Royalston.

Royalston does not have any interstates or other highways passing through town, the nearest being Route 2 to the south, most easily reached through Phillipston and Templeton. Route 32 passes through the western part of town, heading north before becoming New Hampshire Route 32. Route 68 also passes through the town, from South Royalston through the central village to West Royalston, where it terminates at Route 32. The Springfield Terminal rail line passes through South Royalston along the south banks of the Millers River, but there is no public transportation means on this rail or otherwise. The nearest small airport is Orange Municipal Airport in Orange, with the nearest national air service being at Manchester-Boston Regional Airport in New Hampshire.

There were 449 households, out of which 36.1% had children under the age of 18 living with them, 61.7% were married couples living together, 7.1% had a female householder with no husband present, and 26.5% were non-families. 20.5% of all households were made up of individuals, and 7.1% had someone living alone who was 65 years of age or older. The average household size was 2.79 and the average family size was 3.27.

The small part-time police and fire forces cooperate with the Athol and state police for more serious needs. The town does not have a central office for the phone company and uses the phone exchanges for Athol. The residents of the town are devoted to keeping the town a classic and quiet New England town and have taken measures to prevent the town from having the developments that have grown in many small towns in western Massachusetts. The people of the Royalston area are known for their sense of community as evidenced by their call to action when they see others in need.

Internet access is limited due to the unwillingness of the cable companies to wire the whole town. DSL is slowly creeping up from Athol. The town government recently acquired a T1 for the South Royalston town offices. This may become a wireless hub for local residents. Most residents are required to get satellite providers for cable TV and Internet services or settle for dialup. The town has no business zoning. To shop for groceries and basic items, residents go either south to Orange and Athol, northwest to Winchester, New Hampshire, north to Keene, New Hampshire, northeast to Rindge, New Hampshire or east to Winchendon. For work, retail shopping, and general business, residents drive at least 25–30 minutes to get to a population area. Most people in the town either go north to the Keene area, or towards Gardner, Fitchburg, and Leominster.

Royalston is a mostly quiet area, best known for its natural surroundings, which include three waterfalls: Royalston Falls, Doane's Falls and Spirit Falls. Outdoor recreation options can be found at Tully Lake, which is managed by the Army Corps of Engineers. Kayaking, hiking trails, a mountain bike trail and even a disc golf course are available in this area. The Trustees of Reservations also manages the Tully Lake Campground on the shores of Tully Lake. There is a family restaurant known as Pete and Henry's, which has been open for the better part of 50 years. There is the Phinehas S. Newton library, the Royalston Rod and Gun club, as well as numerous old buildings and establishments for historical enjoyment.

The town's only public school is the Royalston Community School, a public elementary school located east of the town center on the road to Winchendon. Education at the school is provided through Grade 6. For middle and high school students the town is part of the Athol-Royalston Regional School District. There is also an independent school, called The Village School, located on South Royalston Road. It serves students from Royalston and surrounding towns, serving preschool through grade 6. The new school building on South Royalston Road at the former Camp Caravan property, opened in September 2018.

All content from Kiddle encyclopedia articles (including the article images and facts) can be freely used under Attribution-ShareAlike license, unless stated otherwise. Cite this article:
Royalston, Massachusetts Facts for Kids. Kiddle Encyclopedia.