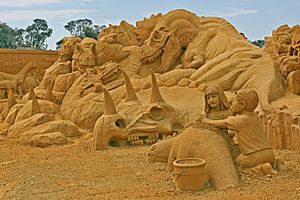 Sand art has progressed well beyond simple sand castles, such as this elaborate sand sculpting display in Frankston, Victoria, Australia

Sand art is the practice of modelling sand into an artistic form, such as a sand brushing, sand sculpture, sandpainting, or sand bottles. A sandcastle is a type of sand sculpture resembling a miniature building, often a castle, originating in Hawaii, though some reports suggest the art form originated in Japan .

The two basic building ingredients, sand and water, are available in abundance on a sandy beach, so most sand play takes place there, or in a sandpit. Tidal beaches generally have sand that limits height and structure because of the shape of the sand grains. Good sculpture sand is somewhat dirty, having silt and clay that helps lock the irregular-shaped sand grains together.

Sand castles are typically made by children for fun, but there are also sand-sculpture contests for adults that involve large, complex constructions. The largest sandcastle made in a contest was 18 feet tall; the owner, Ronald Malcnujio, a five-foot-high man, had to use several ladders, each the height of the sandcastle. His sculpture consisted of one ton of sand and 10 litres of water to sculpt. 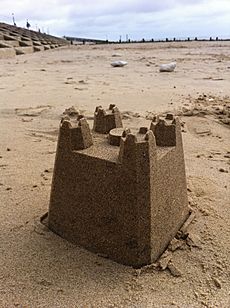 A simple sandcastle formed
from a shaped plastic bucket

Sand grains will always stick together unless the sand is reasonably fine. While dry sand is loose, wet sand is adherent if the proper amounts of sand and water are used in the mixture. The reason for this is that water forms little "bridges" between the grains of sand when it is damp due to the forces of surface tension.

When the sand dries out or gets wet, the shape of a structure may change, and "landslides" are common. Furthermore, the mixture of fine (mostly sharper) and coarse sand granules is very important to achieve good "sand construction" results. Fine granules that have been rounded by the natural influences of seas, rivers or fluvials, in turn negatively influence the bonding between the individual granules as they more easily slide past each other. Research is thus necessary to find the most suitable sand to achieve an optimal, landslide-free construction.

Shovels and buckets are the main construction tools used in creating sand castles and sand sculptures, although some people use only their hands. A simple sand castle can be made by filling a bucket with damp sand, placing it upside-down on the beach, and removing the bucket. For larger constructions, water from the sea to mix with the sand can be brought to the building site with a bucket or other container. Sometimes other materials, such as pieces of wood and plastic are constructed to hold piles of sand in place and in specific shapes—these are called forms.

Sand sculpting as an art form has become very popular in recent years, especially in coastal beach areas. Hundreds of annual competitions are held all over the world. Techniques can be quite sophisticated, and record-breaking achievements have been noted in the Guinness World Records. Sometimes, contests are staged as advertising or promotional events. Most sand sculptors come from other disciplines but there are a few that earn their living solely from sand related activities.

A variant on the sandcastle is the drip castle, made by mixing the sand with water and dripping it from a fist held above. Some call the technique dribbling. When the slurry of sand and water lands on existing sand structures, the effect is Gaudi-esque. 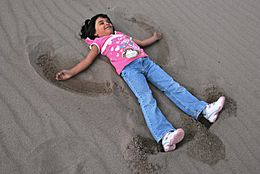 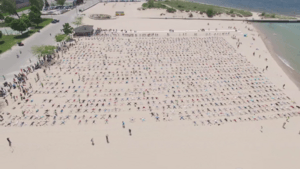 From 1989 until 2009, a World Championship in Sand Sculpture was held in Harrison Hot Springs in Harrison, British Columbia, Canada, also known as "Harrisand". The competition had solo, double and team categories. The world championship was held in Ft. Myers, Florida, and other venues for a limited time. Other countries hold their own versions of the world championships as it is not possible to get all the people who may qualify in the same place at the same time due to the expense and logistics.

The world's tallest sand castle was built on Myrtle Beach in South Carolina by Team Sandtastic as part of the 2007 Sun Fun Festival. The structure was 49.55 feet (15.1 m) high. It took 10 days to construct and used 300 truckloads of sand. This record was broken in 2019 when a 58-feet tall sand castle was unveiled at Rügen in Germany. The tallest-ever sand castle was built by a group of international artists and was constructed with 11,000 tons of sand.

The world's record for the most simultaneous sand angels made at one time was done in Ludington, Michigan, on June 10, 2017. It was performed by 1,387 sand angel people at the same time. This is almost four times the previous record of 352 made in Pembrokeshire, Wales, on June 6, 2015. The duration they lasted making sand angels was for 30 seconds—twice as long as the 15 seconds at Pembrokeshire.

Fight against the tide

A popular game is building a heap of sand, as high as possible, to withstand the upcoming tide.

One of the main attractions of a sandy beach, especially for children, is playing with the sand, as it presents more possibilities than an ordinary sandbox.

One can make a mountain, a pit (encountering clay or the water table), canals, tunnels, bridges, a sculpture (representing a person, animal, etc., like a statue, or a scale model of a building), and many other things.

Tunnels large enough to enter are extremely hazardous; children and adults die every year when such underground chambers collapsed under weight and instability of sand, or due to the tide coming up or the structure being hit by a wave. Sometimes, a dam can be built to hold back the water, tidal forts, which are incredibly large sandcastles with thick walls to protect the keep from the sea, can be built, or canals can be dug to contain the water.

Burying someone up to his or her neck in sand, or burying oneself, is another popular beach activity.

A sand glass is a display in which there are multiple colors of sand in water between two sheets of glass. Unlike sand paintings, a sand glass is meant to be turned; the sand, traditionally in black and a light color, moves into new shapes with each turn. The term "sand glass" is a translation of the Portuguese phrase quadro de areia, literally "sand frame" or "sand picture". Unlike sand paintings, which are a traditional craft, these are found around the world in many colors and sizes.

All content from Kiddle encyclopedia articles (including the article images and facts) can be freely used under Attribution-ShareAlike license, unless stated otherwise. Cite this article:
Sand art and play Facts for Kids. Kiddle Encyclopedia.