Science World is a science centre run by a not-for-profit organization of the same name in Vancouver, British Columbia, Canada. It is located at the end of False Creek and features many permanent interactive exhibits and displays, as well as areas with varying topics throughout the years.

In 1977, Barbara Brink ran mobile hands-on exhibits known as the Extended I around the Lower Mainland. Later, the temporary Arts, Sciences & Technology Centre opened in downtown Vancouver on January 15, 1982, attracting over 600,000 visitors. Another 400,000 benefited from the centre's outreach programs, which were delivered around the province.

When Vancouver was chosen to host the transportation-themed 1986 World's Fair (Expo 86), a Buckminster Fuller–inspired geodesic dome was designed by Expo's chief architect Bruno Freschi to serve as the fair's Expo Centre. Construction began in 1984 and was completed by early 1985. After Expo closed its gates in October of the following year, an intensive lobbying campaign was launched to secure the landmark building, relocate the "Arts, Sciences and Technology Centre" into the post-Expo dome, and convert the Expo Centre into Science World. With much government backing, the dome was obtained from the province and a massive fund-raising campaign ensued. Donations from the federal, provincial and municipal governments, the GVRD, the private sector, foundations, and individuals contributed $19.1 million to build an addition to the Expo Centre, redesign the interior and fabricate exhibits. In 1988, in a four-month preview, over 310,000 visitors came to see the new building. A year later, the 400-seat Omnimax theatre in the upper section of the dome was opened, extending upon the 3D IMAX theatre which was built in 1986 for the Expo "Transitions" film series.

The centre entered its first title sponsorship agreement with Alcan Inc. in 1996, renaming its Omnimax Theatre the Alcan Omnimax Theatre. Alcan later decided to sponsor the organization in different ways and the theatre returned to its original name, the Omnimax Theatre. 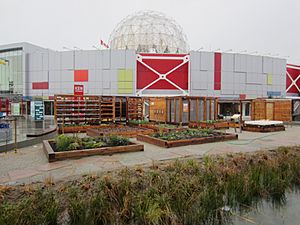 Ken Spencer Science Park shortly after its opening in 2012

On July 29, 2020, the organization's board of governors announced that BC Liberal MLA from Surrey-White Rock, Tracy Redies, would be resigning her legislature seat and taking over as the CEO of Science World, from September 14, 2020. The new CEO would be replacing the interim CEO, Janet Wood. 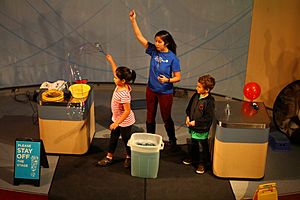 A member of the museum guides children through a demonstration.

Science World runs a variety of outreach programs all over British Columbia. Some examples include On the Road, where staff travel extensively throughout the province to conduct workshops and present science-themed shows in schools and communities that otherwise would not have access to a local science centre; Super Science Club, where Science World educators conduct after-school programs in underserved schools to inspire at-risk children to become passionate about lifelong science and technology learning; and Opening the Door, where high-school students with an interest in science-based careers are offered the opportunity to network with current science professionals.

All content from Kiddle encyclopedia articles (including the article images and facts) can be freely used under Attribution-ShareAlike license, unless stated otherwise. Cite this article:
Science World (Vancouver) Facts for Kids. Kiddle Encyclopedia.