In 2006, Speed became the first American driver to race in Formula One since Michael Andretti in 1993, when he made his début at the 2006 Bahrain Grand Prix for Scuderia Toro Rosso. He contested 28 races, before he was replaced midway through the 2007 season by Sebastian Vettel. Speed later turned his career towards stock car racing; specifically NASCAR, where he drove for Team Red Bull, Whitney Motorsports and Leavine Family Racing in the Sprint Cup Series. Subsequently, he moved into Global Rallycross with Andretti Autosport, winning the title in 2015, 2016 and 2017. On November 1, 2018, Speed announced he would be joining Subaru Rally Team USA for the 2019 ARX season.

Speed started kart racing at the age of 10. He moved up to Formula series in 2001. He was a champion in US Formula Russell. He drove in both the US Barber Formula Dodge and US Star Mazda Series. Speed won the 'Red Bull Driver Search' program. In 2003 he drove for the ADR team in British Formula Three. During that year he fell ill with ulcerative colitis, a form of inflammatory bowel disease. He returned to the United States for treatment.

2004 saw two championship titles for Speed. He won the Formula Renault 2000 Eurocup and later German Formula Renault. This was despite his worsening colitis. This performance earned him a drive in the first season of GP2 Series for 2005. He ended the season third place in the driver championship standings behind Nico Rosberg and Heikki Kovalainen.

At the end of 2005, Speed drove the first three races of the new A1 Grand Prix series for A1 Team USA. 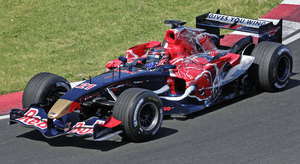 Speed at the 2006 Canadian Grand Prix

In 2005 at the Canadian Grand Prix, Speed took part as a test driver for Red Bull Racing; becoming the first American driver to participate in a Formula One event since Michael Andretti's 1993 stint. He was also the test driver for the United States Grand Prix.

After the purchase of Minardi, Red Bull Racing announced the team would become Scuderia Toro Rosso. Speed and Vitantonio Liuzzi would be the drivers for the 2006 season.

In 2006, Speed's first race was the Bahrain Grand Prix. His best finish of the season was a ninth place at the Australian Grand Prix. He would have finished Australia in the points, but had 25 seconds added to his race time for overtaking under yellow flags. At the United States Grand Prix he qualified a career best 13th. He was taken out of the race in a first-lap collision.

Scott Speed's 2007 season was disappointing. He had equipment breakdowns and several crashes. He spun off the circuit in wet conditions at the European Grand Prix. That turned out to be his last race for the team. After the race, it was reported that he was involved in a physical altercation with team principal Franz Tost. Tost has since denied this. Speed also said that they wanted to get rid of both him and Liuzzi. Before the next race at Hungary, the team announced that he had been replaced by Sebastian Vettel. 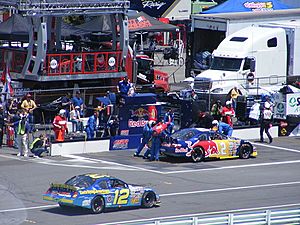 To get ready for racing in NASCAR, Speed raced in the Automobile Racing Club of America (ARCA) series. he enter several races in 2007, and a full season in 2008. He drove the Red Bull-sponsored Toyota for Eddie Sharp Racing. Speed finished 5th in the points in 2008.

During the finale of the 2008 ARCA season, Ricky Stenhouse Jr. hit Speed and sent him into the wall. This ended Speed chance at a good finish, and possibly a Championship. After repairs, Speed intentially ran his car into Stenhouse, sending both cars into the wall. Neither driver was injured. ARCA officials parked Speed for the day.

Speed made his Craftsman Truck Series debut at Atlanta Motor Speedway on March 7, 2008. He drove the Morgan-Dollar Motorsports #46 Cheverolet truck with Red Bull sponsorship. In his second race, he recorded his first Top 10 finish at Martinsville Speedway. He won his first career race on May 30 at Dover with Bill Davis Racing in a Toyota. On Sunday October 19, 2008, Scott Speed started his first Sprint Cup Series event at Martinsville Speedway. He finished in 30th place. He finished the Cup season in the #84 Red Bull Toyota Camry for the Red Bull Racing Team.

For the 2010 Sprint Cup season, Speed was still in the #82 car. He had a disappointing season, with only two top ten finishes. At the end of the year, Red Bull Racing release Speed from his contract. This move was to make room for the return of Brian Vickers and the addition of Kasey Kahne. Vickers was returning after heart surgery. Kahne was signed for a one-year deal.

Within two weeks of leaving Red Bull Racing (RBR), Speed filed a lawsuit against the team for breach of contract. Breach of contract means that one person or group in the contract (RBR in this case) did not do the things they should have done. Speed is asking for $6.5 million US$ in the lawsuit. Speed alleges (says) that Red Bull

Speed is claiming that Red Bull did not give his race team enough money or himself good enough race cars. Without the best race cars, it is hard to race at the same level as the top teams.

On July 28, 2011, Speed place a lien on RBR's property in Mooresville, North Carolina. The lien is for the race shop and the land it sits on. A lien is a legal tool to keep RBR from selling the property. The property can be used to ensure a debt is paid. RBR purchased the property for about $3.3 million US$.

↔ Competed in less that 75% of the races. Not eligible to score championship points.
† Team results.

Speed currently resides in Mt. Holly, NC, where he lives with his wife Amanda Mathis.

His brother Alex currently races karts in America and is a 3 time Stars of Karting champion and a 3 time SKUSA Supernationals winner.

All content from Kiddle encyclopedia articles (including the article images and facts) can be freely used under Attribution-ShareAlike license, unless stated otherwise. Cite this article:
Scott Speed Facts for Kids. Kiddle Encyclopedia.