Kebabs are various cooked meat dishes, with their origins in Middle Eastern cuisine. Many variants are popular throughout Asia, and around the world.

In most English-speaking countries, a kebab is commonly the internationally-known shish kebab or shashlik, though outside of North America a kebab may be the ubiquitous fast-food doner kebab or its variants. In contrast, in Indian English and in the languages of the Middle East, other parts of Asia, and the Muslim world, a kebab is any of a wide variety of grilled meat dishes. Some dishes ultimately derived from Middle Eastern kebab may have different names in their local languages, such as the Chinese chuanr.

Although kebabs are often cooked on a skewer, many types of kebab are not. Kebab dishes can consist of cut up or ground meat or seafood, sometimes with fruits and vegetables; cooked on a skewer over a fire, or like a hamburger on a grill, baked in a pan in an oven, or as a stew; and served with various accompaniments according to each recipe.

The traditional meat for kebabs is most often mutton or lamb, but regional recipes may include beef, goat, chicken, fish, or more rarely due to religious prohibitions, pork. Pork is never used by Muslims but is sometimes used by non-Muslim sellers. Muslims are not allowed to eat pork, for religious reasons.

There are many varieties of kebab and the term means different things in different countries. The generic term kebab usually refers to doner kebab or döner kebap in Europe and to shish kebab in the United States, though its meaning can vary. 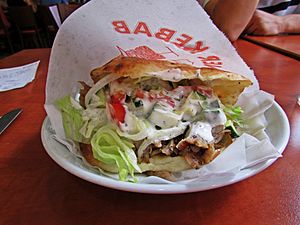 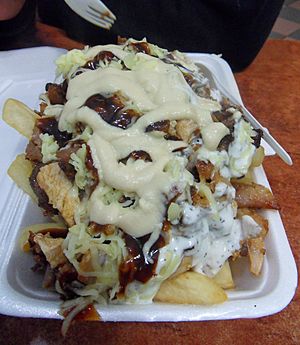 Evidence of hominin use of fire and cooking in the Middle East dates back as far as 790,000 years, and prehistoric hearths, earth ovens, and burnt animal bones were spread across Europe and the Middle East by at least 250,000 years ago. In ancient times, Homer in the Iliad (1.465) mentions pieces of meat roasted on spits, and excavations in Santorini unearthed stone supports for skewers used before the 17th century BC.

Kebab dishes originated in the medieval kitchens of Persia and Turkey. They were generally made with smaller chunks or slices of meat, or ground meat, often cooked on skewers over a fire. This cooking method has a long history in the region, where it would be practical in cities where small cuts of meat were available in butchers' shops, and where fuel for cooking was relatively scarce, compared to Europe, where extensive forests enabled farmers to roast large cuts of meat whole.

Kebab was served in the royal houses during the Delhi Sultanate (1206–1526 CE), and even commoners would enjoy it for breakfast with naan.

All content from Kiddle encyclopedia articles (including the article images and facts) can be freely used under Attribution-ShareAlike license, unless stated otherwise. Cite this article:
Kebab Facts for Kids. Kiddle Encyclopedia.