Shoreham is a town in Addison County, Vermont, United States. The population was 1,265 at the 2010 census.

Shoreham is located in western Addison County along the shore of Lake Champlain. The western boundary of the town, which follows the center of the lake, is also the state border with New York. Neighboring Vermont towns are Bridport to the north, Cornwall and Whiting to the east, and Orwell to the south. Ticonderoga, New York, is to the west across Lake Champlain, accessible in the summertime by the Ticonderoga–Larrabees Point Ferry, a diesel-powered cable ferry. 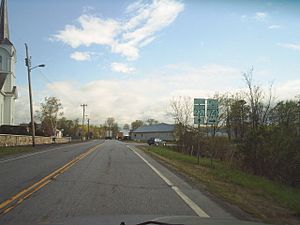 VT 74 and VT 22A junction at Shoreham village

There were 453 households, out of which 36.2% had children under the age of 18 living with them, 64.7% were couples living together and joined in either marriage or civil union, 7.7% had a female householder with no husband present, and 24.3% were non-families. 18.1% of all households were made up of individuals, and 6.0% had someone living alone who was 65 years of age or older. The average household size was 2.70 and the average family size was 3.08.

They can also visit the Whistle Pig Farm where the famous rye whiskey Whistle Pig is hand-bottled. For dinner and drinks, Gastropub at the Shoreham Inn is where tourists can interact with many of the town’s residents.

All content from Kiddle encyclopedia articles (including the article images and facts) can be freely used under Attribution-ShareAlike license, unless stated otherwise. Cite this article:
Shoreham, Vermont Facts for Kids. Kiddle Encyclopedia.