, United States. The population was 5,042 at the 2010 census. The name comes from the Mohawk tekontaró:ken, meaning "it is at the junction of two waterways".

The Town of Ticonderoga is in the southeastern corner of the county and is south of Plattsburgh.

The crossing between Lakes George and Champlain had been used by natives for thousands of years. In the 17th century, French explorers such as Samuel de Champlain explored the area.

The town was located on the direct route, utilizing rivers and two long lakes, between New York City to the south and the French settlement of Montreal to the north. The town was the setting for historic battles and maneuvers during both the French and Indian War and the American Revolutionary War. Fort Ticonderoga, constructed by the French, who called it Fort Carillon, in the 1750s, marked the location of an important portage between the two lakes.

The town of Ticonderoga was formed in 1804 from part of the town of Crown Point. By the end of the 18th century, the town was noted for wood products such as paper and lead pencils. The position of the now former Ticonderoga village at the north end of Lake George made it an important port.

Historic Fort Ticonderoga is in this town, east of the former village of Ticonderoga.

The town encompasses both the north end of Lake George and a portion of Lake Champlain near its southern end. The short, but rapidly flowing, La Chute River connects the two lakes. The east town line is the border of Vermont, and the south town line is the county line of Warren County and Washington County. 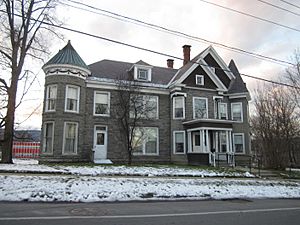 The H. G. Burleigh House was built in 1894 and is a Queen Anne-style building with Colonial Revival features. It was originally owned by U.S Congressman Henry G. Burleigh, and has been on the National Register of Historic Places since 1988.

Communities and locations in Ticonderoga

Amtrak, the national passenger rail system, provides service to Ticonderoga, operating its Adirondack daily in both directions between Montreal and New York City.

All content from Kiddle encyclopedia articles (including the article images and facts) can be freely used under Attribution-ShareAlike license, unless stated otherwise. Cite this article:
Ticonderoga, New York Facts for Kids. Kiddle Encyclopedia.