Orwell is a town in Addison County, Vermont, United States. The population was 1,239 at the 2020 census. Mount Independence was the largest fortification constructed by the American colonial forces. The 300-acre (1.2 km2) site is now one of Vermont's premier state-operated historic sites.

Orwell is located in the southwest corner of Addison County. Its western border is the New York–Vermont state line, following the middle of Lake Champlain, near the lake's southern end. Orwell is bordered by the town of Shoreham to the north, Whiting to the northeast, Sudbury to the east and southeast, and Benson to the south. Sudbury and Benson are within Rutland County. To the west, across Lake Champlain, are the town of Putnam, New York, in Washington County, and Ticonderoga, New York, in Essex County. Mount Independence, elevation 306 feet (93 m), is located in northwest Orwell, overlooking Lake Champlain and the town of Ticonderoga.

Vermont Route 22A runs through the town, leading north to Vergennes and south to Fair Haven, where it continues into New York. Vermont Route 73 crosses Route 22A west of the town center and leads east to Brandon and northwest to the Ticonderoga–Larrabees Point Ferry across Lake Champlain.

There were 441 households, out of which 38.1% had children under the age of 18 living with them, 65.5% were married couples living together, 6.1% had a female householder with no husband present, and 22.9% were non-families. 17.9% of all households were made up of individuals, and 6.6% had someone living alone who was 65 years of age or older. The average household size was 2.69 and the average family size was 3.02. 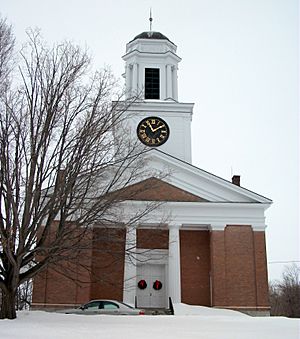 After the construction of Fort Independence on Mount Independence in 1775, rebel soldiers bravely manned the lesser fortifications of the Vermont-side defenses. While those soldiers billeted at Fort Ticonderoga enjoyed comparatively splendid conditions in the French-style fort, Mount Independence proved a trying and difficult environment for its small cadre of revolutionary defenders, who frequently returned to their farms in the surrounding countryside to tend to their homesteads. The fortress was passed between the British and Colonials, until it was eventually abandoned at the cessation of hostilities on the northern front of the war.

Orwell enjoyed a time of peace and prosperity after the war's conclusion, marking a time of great emotional uprising and town glee. However, these bright times would be marred by several major tragedies that coincided with the attempted industrialization of the area's farmlands in the 1870s, when several young men were lost in a thresher accident near what is now the intersection of Main Street and Route 22A. This tragedy was keenly remembered by the community, which banned industrial farming later that year in a special town meeting. Industrialized farm equipment was only allowed back into Orwell after the economic collapse of the early 1900s, and even then, special restrictions were placed to limit the capabilities of such farm instruments. The town's law against the use of "Modern Farm Machinery of All Kinds" was never actually repealed, and continues to be a curio law on the books that the town refuses to repeal.

Orwell attempted in the late 1990s to obtain a franchised fast-food restaurant, as a vital link in the food availability between Whitehall, New York, and Vergennes, Vermont, but the residents of the surrounding townships blocked the move, claiming it would upset the rural beauty of the western Vermont countryside. Orwell is known as the Fortress of America. The town motto is "First in Revolution, First in Recreation".

All content from Kiddle encyclopedia articles (including the article images and facts) can be freely used under Attribution-ShareAlike license, unless stated otherwise. Cite this article:
Orwell, Vermont Facts for Kids. Kiddle Encyclopedia.