The Sonny Bono Salton Sea National Wildlife Refuge is at the southern end of the Salton Sea in Imperial Valley, California, 40 miles (64 km) north of the Mexican border. Situated along the Pacific Flyway, the Refuge is the only one of its kind, located 227 feet (69 m) below sea level. Because of its southern latitude, elevation and location in the Colorado Desert, the Refuge experiences some of the highest temperatures in the nation. Daily temperatures from May to October generally exceed 100 °F with temperatures of 116°–120 °F recorded yearly.

The refuge was established as a sanctuary and breeding ground for birds and wild animals in 1930. In 1998, the refuge was renamed after Congressman Sonny Bono, who played an active role in trying to save the Salton Sea. Originally, it included approximately 37,600 acres (15,200 ha). Nearly 60 percent of the original acreage was an open saline lake with the remainder being shoreline alkali flats, freshwater wetlands, native desert scrub and upland (farm fields). Due to the inflow of agricultural effluent and a subsequent rise in the level of the Salton Sea, all of the original Refuge area has been inundated. At present, only about 2,200 acres (8.9 km2) manageable remain suitable for farming and wetland development.

The topography of the refuge is flat, except for Rock Hill, which is located at the refuge headquarters. The refuge is bordered by the Salton Sea on the north and intensively farmed agricultural lands on the east, south and west.

The refuge is composed of two disjunctive units, separated by 18 miles (29 km) of private lands. Each unit contains managed wetland habitat, agricultural fields, and tree rows. The courses of the New and Alamo rivers run through the refuge, providing freshwater inflow to the Salton Sea.

The Sonny Bono Salton Sea National Wildlife Refuge was established in 1930 by executive order as a breeding ground for birds and wild animals. Primary objectives on the refuge include endangered species production and maintenance, sensitive species production and maintenance, wintering waterfowl maintenance, and other migratory bird management. Refuge habitats are intensively managed. Ponds, forests, and agricultural fields are designed, developed and manipulated to achieve wildlife objectives.

The refuge has 826 acres (334 ha) of manageable wetland units, which are managed for resident and migratory bird species such as waterfowl, shorebirds and wading birds. In addition, specified impoundments are managed as permanent wetlands to provide critical nesting and year-round habitat for the endangered Yuma clapper rail. Refuge wetlands provide nesting habitat for a variety of other species, including the least bittern, white-faced ibis, black-necked stilt and American avocet. All wetlands are flooded from water supplied by the Imperial Irrigation District. This water is termed "class 1" irrigation water, which is free of fertilizers, toxic pesticides and high levels of salts that are common in agricultural drain water.

Wildlife management at the Sonny Bono Salton Sea NWR involves an intensive farming program to provide suitable forage for over 30,000 wintering geese and other migratory birds and wildlife. Croplands constitute 869 acres (352 ha) of the refuge, with many fields cooperatively farmed by local farmers.

Crops planted on refuge land includes alfalfa, wheat, rye grass, milo, millet, and sudan grass. With use restrictions on the use of certain pesticides on the refuge, infestations of white flies, and the booming prices of sudan grass, many cooperative farmers have switched from planting alfalfa to sudan grass over the years. Sudan grass grows like a weed in the Imperial Valley and requires little to no use of pesticides. 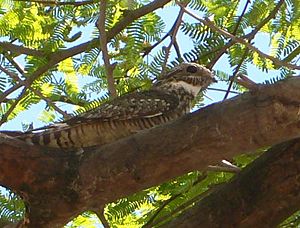 Lesser nighthawk at the refuge headquarters

The Sonny Bono Salton Sea NWR is geographically located within the southwestern edge of the Colorado zone of the Sonoran Desert biome. This location, coupled with an elevation of 227 feet (69 m) below sea level, results in extremely low annual precipitation and extremely high day time temperatures. Despite the harsh environmental conditions, the Salton Sea supports one of the most diverse avian compositions in the United States as well as a host of endangered and other wildlife species.

Habitat diversity on Refuge lands provides for the needs of resident wildlife species as well as numerous seasonal residents and migrants of the Pacific Flyway. Over 400 bird species have been recorded at the Refuge and at least 93 species have nested on the Refuge. In addition, 41 species of mammals, 18 species of reptiles, 4 species of amphibians and 15 species of fish have been identified in the area.

Numbers and species of birds that can be seen on the Refuge vary according to season. Heavy migrations of waterfowl, marsh and shorebirds occur during spring and fall. Throughout the mild winter and spring a wide variety of songbirds and birds of prey are present. They are attracted to the freshwater marshes and riparian habitat along the New and Alamo rivers. The greatest number of species are present from November to May.

Visibility varies greatly from species to species due to the nocturnal habits of some and seasonal hibernation of others. Most rodent species exist in terrestrial habitats where they provide important food resources for raptors and other predators. During winter months, rodents provide food for heron and egret species as well. Muskrats are present in freshwater drains and ponds where their feeding and burrowing activities help maintain marsh habitats for various other wildlife species.

Due to environmental factors, amphibians are not found in large numbers or diversity at the Sonny Bono Salton Sea NWR. Species occurring on the refuge include bullfrogs and lowland leopard frogs. Lowland leopard frogs respond well to shallow, permanent wetland habitat created for the Yuma clapper rail. They are not present elsewhere on the Refuge due to competition from exotic bullfrogs. Woodhouse's toad and red-spotted toads are also found on the refuge.

Many different species of reptiles occur on the refuge. Common species include the gopher snake, western diamondback snake, coachwhip, common kingsnake, whiptail lizard, desert spiny lizard and side-blotched lizard. The spiny soft-shell turtle and the desert tortoise are also found on the refuge. Spiny soft-shell turtles are found in freshwater drains and ponds, while the desert tortoise, although rarely seen, can be found in the upland desert areas.

Fish populations thrive in the Salton Sea. The aquatic ecosystem is extremely productive because of the large amounts of nutrients it receives. The nutrients stimulate growth of phytoplankton and algae, which in turn, support zooplankton and worms. All of this provides a continuing supply of food for fish. Periodically, decomposition of large algal blooms diminishes the dissolved oxygen in the water. This decomposition has been tied to occasional fish die-offs that occur throughout the year.

Tilapia is the most common fish found in the Salton Sea. Tilapia is the most populous fish in the Sea due to its ability to adapt to highly saline conditions and the fact that it is a prolific breeder. Tilapia are an important food source for birds and other fish, along with being a popular game fish. They can weigh more than 3 pounds (1.4 kg).

The Michael Hardenberger Trail is located at Unit 1 off Vendel Road, which is at the south end of the Salton Sea. The ½-mile trail encircles one of the freshwater ponds, a favorite nesting spot for the endangered Yuma clapper rail.