South Norwalk is a neighborhood and the Second Taxing District in Norwalk, Connecticut. The neighborhood was originally a settlement called 'Old Well' which became chartered as the city of 'South Norwalk' on August 18, 1870. The cities of Norwalk and South Norwalk were incorporated on June 6, 1913.

The neighborhood is often referred to with the acronym 'SoNo', referring to "the formerly rundown stretch of Washington Street between the Metro-North Railroad tracks and Norwalk Harbor."

SoNo South encompasses what state representative Joseph Mann, a Democrat who lives and works in the neighborhood, called "the real South Norwalk" in 2004 - the heavily minority, middle- to lower-class residential and industrial neighborhoods bordered on the north and south by Washington and Concord streets, and on the east and west by Water Street and Martin Luther King Drive." 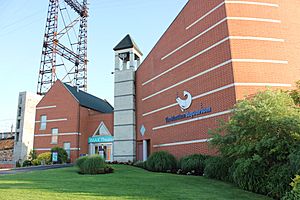 "SoNo, with its delightful mixture of classy and tasteful or just plain homey restaurants, shops, and clubs, combined with museums and galleries, has become integrated with greater Norwalk as well as the harbor and Long Island Sound beyond. SoNo is anchored by the Maritime Center, (present-day Maritime Aquarium at Norwalk) which invites visitors of all ages to become immersed in sea life. Exhibits, educational programs, research cruises, and a boat building shop, are topped off by the spectacular IMAX Theatre".

South Norwalk is host of the annual SoNo Arts Celebration. The free event takes place every August and features over 100 fine art and craftsperson exhibits, as well as over 25 musical performances for all ages. 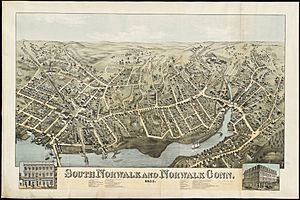 "Sailing ships in the olden days pulled up to docks along the inner harbor and waited their turn to fill up their water casks from the “Old Well”. In a 1738 deed Washington Street is referred to as “the highway that leads to ye landing place called Ye Old Well. The actual well is shown on the Beers Atlas map of 1867 to be East of Water Street about 75 feet South of Washington Street. The exact location has been lost but is believed to have been very near to Donovan’s Tavern, which seems likely since sailors are said to have enjoyed the spirits. Old Well was involved in coastal trade, manufacturing, and shipbuilding as well as having many farms with diversified crops."

“Old Well was scarcely a village in those days, but rather a group of farms, and the well which gave the place its name was on Water street, near the corner of Haviland street, on the property of Eliakim Raymond, a patriarch of several Norwalk lines. His house stood at the corner of Washington and Water streets before the Revolution and was burned with rest of the town."

"Norwalk was made a borough in 1836, and the village of Old Well, named from an ancient well where vessels were supplied with water, was incorporated into a city in 1868, and named South Norwalk two years afterward." "South Norwalk, formerly called "Old Well" was organized a city August 18, 1870, under a charter granted by the Legislature of Connecticut, July 5th of the same year. This charter was revised by the Legislature April 19, 1882, and the city continued its existence under this revised charter until May 27, 1897, when the Legislature approved a revised and amended charter, under which the city has since continued and worked."

"In the 1800s, industrialization started to take place--large factories manufacturing goods such as firearms, buttons, shoes, cloth and hats were increasing in Connecticut and in Norwalk. Workers came up from Chesapeake, Maryland, to work as oystermen. Wealthy owners and managers of businesses lived on Golden Hill overlooking South Norwalk. Immigrants came into Norwalk from many places. One of the largest [group] to come here in the early 1900s was the Hungarians; there were also many Eastern European Jews and Italians, among others."

"Prosperous and self-sufficient, the City of South Norwalk had little financial incentive to join in the 1913 consolidation. Its residents feared higher taxes if they lost their city status. In 1902 South Norwalk had tried to leave the Town of Norwalk entirely, and, along with East Norwalk, become a completely separate Town. At the time Mayor Mortimer M. Lee said that South Norwalk had “a large water system, a splendid electric light plant, a separate sewer system, a public library and a library building and schools second to none.” In 1903 the Connecticut State legislature passed a bill to create the independent Town of South Norwalk, but it was vetoed by the governor."(Abiram Chamberlain) 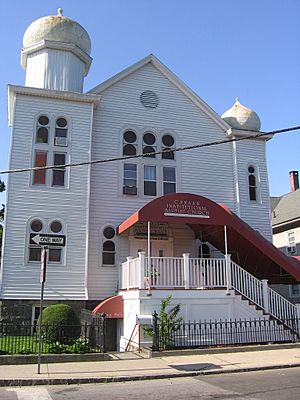 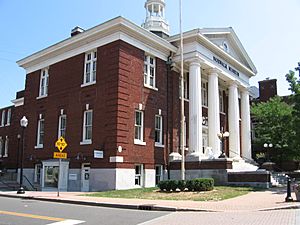 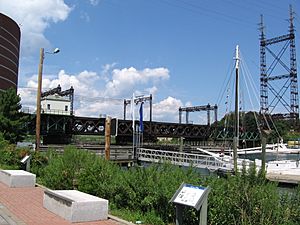 All content from Kiddle encyclopedia articles (including the article images and facts) can be freely used under Attribution-ShareAlike license, unless stated otherwise. Cite this article:
South Norwalk Facts for Kids. Kiddle Encyclopedia.