Sprague is a small town in Lincoln County, Washington, United States. The population was 446 at the 2010 census. The town was platted in 1880 and named for former American Civil War Union general John Wilson Sprague. 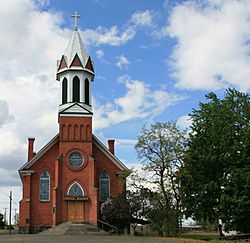 Sprague was first settled by William Newman, who established an inn at the location.

Sprague was destroyed by fire on August 3, 1895. The fire and subsequent decision by the Northern Pacific Railroad to not rebuild in the town resulted in the relocation of the county seat, held by Sprague after an election in 1884, to Davenport in 1896 after a controversial vote.

Mary Queen of Heaven Catholic Church in Sprague, Washington was originally built in 1883. The current church was built in a Gothic Revival style and erected in 1902, just south of the site of the original church and blessed by the Bishop of Nesqually. It was placed on the National Register of Historic Places by the U.S. Department of Interior in 1990.

The town has a seasonal creek running through it named "Negro Creek." Much debate has occurred regarding the creek's name but the name remains.

The Sprague Catholic Cemetery is associated with and maintained by the Mary Queen of Heaven Parish Church. Those buried in this historic cemetery include lifetime residents of Sprague as well as immigrants born as long ago as the 1850s. The first burial took place on December 25; Mr. and Mrs. Mike Ferrell buried their infant daughter Margaret Mabel Farrell. The Farrells later donated the plot of land their daughter was buried on to the Catholic Church. It was dedicated by Bishop Junger of Nesqually Diocese.

According to the United States Census Bureau, the city has a total area of 0.63 square miles (1.63 km2), all of it land.

There were 197 households, of which 26.4% had children under the age of 18 living with them, 51.8% were married couples living together, 9.1% had a female householder with no husband present, 4.1% had a male householder with no wife present, and 35.0% were non-families. 32.5% of all households were made up of individuals, and 15.2% had someone living alone who was 65 years of age or older. The average household size was 2.26 and the average family size was 2.81.

All content from Kiddle encyclopedia articles (including the article images and facts) can be freely used under Attribution-ShareAlike license, unless stated otherwise. Cite this article:
Sprague, Washington Facts for Kids. Kiddle Encyclopedia.