The church has strong associations with Charles Dickens, whose father was imprisoned for debt in the Marshalsea prison. The surviving wall of the prison adjoins the north side of the churchyard. Dickens himself lived nearby, in Lant Street, lodging in a house that belonged to the Vestry Clerk of St George's. This was during the darkest period of his life when, as a teenager, with his father in prison, he had to work in the 'blacking factory', and his literary career must have seemed an impossible dream. Later, he was to set several scenes of the novel Little Dorrit in and around St George's Church. There is a small representation of Little Dorrit in the east window of the church.

It is also a recognised church of the City of London Company of Parish Clerks and the guild church of the Guildable Manor. From 2008 the annual Southwark Quit Rents ceremony, before the Queen's Remembrancer has taken place there. 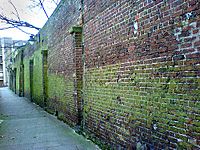 Surviving wall of the Marshalsea debtors' prison at the north side of the churchyard.

According to traditional hagiography, the saint served as a soldier in the Roman Army and was killed on the orders of the emperor Diocletian in 303 for refusing to persecute Christians and confessing to his own Christianity. The earliest reference to this church is in the Annals of Bermondsey Abbey, which claims that the church was given by Thomas Ardern and Thomas his son in 1122. The date follows the Battle of Acre when Saint George burgeoning stories were popularised by European, especially Norman, crusaders; perhaps the church dedication is related to the Arderns' involvement in the Crusade. This gift included tithes from their manor at Horndon in Essex and "land of London Bridge returning five solidos". This statement means that this St George's is the first church with this dedication in Greater London and predates Edward III's adoption of him as the patron of the Garter by over 200 years. The statement is also the first reference to London Bridge's endowment lands. The present priest was nominated by the City's Bridge House Estates.

On Henry V's return from the Battle of Agincourt in 1415 he was welcomed by the Aldermen of London on the steps of the church. The 'Agincourt Song' was commissioned as part of the celebration. In this battle the standard with the red cross was used for the first time. In the same year St George became the patron saint of England.

The west tower dominates views along Borough High Street from both the north and south due to the curve in the street at this point, where it now meets Great Dover Street. Originally, a much narrower road to the south of the church called Church Street led into Kent Street (now renamed Tabard Street), the historic route to Dover. Due to the volume of traffic, Great Dover Street was cut through parallel to Kent Street as part of the road network enhancements for the first road crossing (east of Putney) west of London Bridge, Westminster Bridge, in 1750. Tabard Street was later extended through the churchyard on the north side of the church, leaving the church focal to what was a road island but the east side of which is pedestrianised. 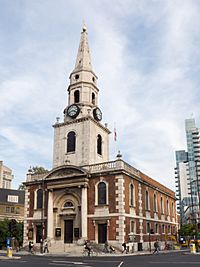 The present church is believed to be the third on this site. There was a Norman church of unknown appearance; inscribed stones from it were discovered in the second church. This was replaced at the end of the fourteenth century by a church with a bell tower, which may have been from where Anton van den Wyngaerde surveyed at least part of his plan view of London, which includes a drawing of the church, but slightly out of position as might occur if drawn onto the perspective latterly. The church also appears to be that in William Hogarth's engraving of Southwark Fair made in 1733, a year before it was demolished. The church was rebuilt in a Classical style to the designs of John Price between 1734 and 1736, partly funded by £6,000 from the Commission for Building Fifty New Churches. The major City Livery Companies and the Bridge House Estates also supported this rebuilding, their arms decorate the nave ceiling and stained glass.

In 1899, the crypt was cleared and 1,484 coffins were removed and re-interred at Brookwood Cemetery in Surrey.

The foundations of the south wall were strengthened in 1938 and helped save the building from collapse during the Second World War, when the damage from enemy action was considerable.

The red brick and Portland Stone structure of the church has suffered from considerable subsidence damage, and the nave was declared unsafe in 2000, although services continued in other parts of the building. In September 2005, St George the Martyr received funding via the Heritage Lottery Fund for repairs and refurbishments, which involve complete underpinning of the building, and the lowering of the floor levels in the crypt to create additional space. A large number of lead Georgian coffins were removed from the crypt to allow the works to take place. Subsequent archaeological investigations of the ground beneath the church found substantial medieval and Roman structures. The destruction of some archaeological remains before a fuller excavation could be completed led to controversy.

The church was closed for restoration works between September 2005 and March 2007. During this time the congregation worshipped at nearby Guy's Chapel. The new 'crypt', in fact a church hall created by the underpinning works, provides a new conference venue in central London. Services at St George's resumed on Palm Sunday, 1 April 2007. 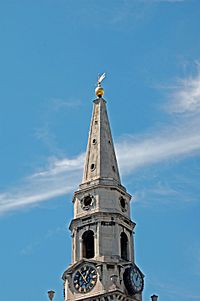 The spire of St George the Martyr

The church is built of red brick with Portland stone, and has a copper and slate roof. There is a pediment at the west entrance, supported by Ionic columns. The tympanum displays reliefs of angels, and there are eight steps leading up to the entrance.

The tower is built of Portland stone, with a large spire. On top of the spire is a ball and weather vane.

Inside, the nave has a gallery on three sides, with a pair of fluted Ionic columns supporting the gallery at the west end. On the ceiling is a painting done by Basil Champneys in 1897 of cherubs breaking through a clouded sky, with texts on a ribbon. The coats of arms of four of the City Livery Companies (the Skinners, Grocers, Fishmongers and Drapers) appear on a frieze. The chancel has three bays. There is a tall pulpit on four Ionic columns, and an octagonal font of grey marble.

The east window of the church, which includes a kneeling figure of Dickens' Little Dorrit, was designed by Marion Grant.

Like St James Garlickhythe in the City of London, St George the Martyr has two reliefs of the Royal Arms. Both are of the House of Stuart. The main one, located on the gallery at the west end, is said to have come from the former church of St Michael Wood Street.

All content from Kiddle encyclopedia articles (including the article images and facts) can be freely used under Attribution-ShareAlike license, unless stated otherwise. Cite this article:
St George the Martyr, Southwark Facts for Kids. Kiddle Encyclopedia.