St Julian's Church, Norwich is a Grade I listed parish church in the Church of England in Norwich, England. 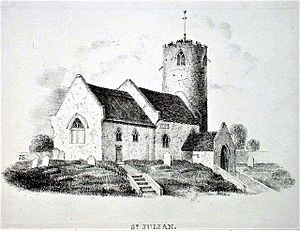 The church was built in the 11th and 12th century. St. Julian's is an early round-tower church, one of the 31 surviving parish churches of a total of 58 that were built in Norwich after the Norman conquest of England.

The Lady Julian of Norwich, or Mother Julian, or Dame Julian, a 14th-century anchoress, took her name from the saint of the church, which was dedicated either to Julian the Hospitaller or Julian of Le Mans. Her anchoress's cell was in a corner of the churchyard. The church was attached to the priory at Carrow Abbey and the prioress and nuns appointed the priest and maintained the church. It is speculated that the Prioress Edith Wilton and her provided the anchoress with her writing materials,

Julian of Norwich's cell did not stand empty. In 1428 Julian(a) Lampet moved in the cell and she was there for fifty years during which time Margaret Pygot was the prioress.

By 1845 St. Julian's was in a very poor state of repair and that year the east wall collapsed. After an appeal for funds, the church underwent a ruthless restoration. It was further restored in the 20th century, but was destroyed during the Norwich Blitz of 1942, when in June that year the tower received a direct hit. After the war, funds were raised to rebuild the church by the architect A. J. Chaplin and reopened in 1953, mainly to act as a Shrine Church for Julian of Norwich.

It now appears largely as it was before its destruction, although its tower is much-reduced in height, and a chapel has been built in place of the long-lost anchorite cell.

The Friends of Julian have a shop and lending library in a hall at the corner of the street.

The church is within the St John the Baptist's Church, Timberhill, Norwich parish which is part of the Diocese of Norwich.

The flint building has stone and brick dressings with a pantile roof. It consists of a nave, single-bay chancel, a south chapel with vestry with a circular west tower. The tower includes a bell from around 1500 which was rehung in 1992.

The church has an organ dating to 1860 by Henry Jones, which was installed here in 1966. A specification of the organ can be found on the National Pipe Organ Register.

All content from Kiddle encyclopedia articles (including the article images and facts) can be freely used under Attribution-ShareAlike license, unless stated otherwise. Cite this article:
St Julian's Church, Norwich Facts for Kids. Kiddle Encyclopedia.