St Michael, Cornhill, is a medieval parish church in the City of London with pre-Norman Conquest parochial foundation. It lies in the ward of Cornhill. The medieval structure was lost in the Great Fire of London, and replaced by the present building, traditionally attributed to Sir Christopher Wren. The upper parts of the tower are by Nicholas Hawksmoor. The church was embellished by Sir George Gilbert Scott and Herbert Williams in the nineteenth century.

The church of St Michael was in existence by 1133. The patronage was in the possession of the Abbot and convent of Evesham until 1503, when it was settled on the Drapers Company. A new tower was built in 1421, possibly after a fire. John Stow described the church as "fair and beautiful, but since the surrender of their lands to Edward VI, greatly blemished by the building of four tenements on the north side thereof, in the place of a green church-yard". On the south side of the church was a churchyard with what Stow calls a "proper cloister", with lodgings for choristers, and a pulpit cross, at which sermons were preached. These were maintained by Sir John Rudstone, after whose death in 1530 the choir was dissolved and the cross fell into decay.

There is a folk tale, dating from the early 16th-century, which tells of a team of bellringers who once saw 'an ugly shapen sight' appear as they were ringing the bells during a storm. They fell unconscious, but later discovered scratch marks in the masonry. For years afterwards these were pointed out as the 'Devil's clawmarks'.

The medieval church, except for the tower, was destroyed in the Great Fire of London in 1666, and the present building was begun in 1672. The design is traditionally attributed to Sir Christopher Wren. However, the authors of the Buildings of England guide to the City churches believe Wren's office had no involvement with the rebuilding of the body of the church, the parish having dealt directly with the builders. The new church was 83 feet long and 67 feet wide, divided into nave and aisles by Doric columns, with a groined ceiling. There was an organ at the west end, and a reredos with paintings of Moses and Aaron at the east. The walls, George Godwin noted, did not form right-angles, indicating the re-use of the medieval foundations.

The fifteenth-century tower, having proved unstable, was demolished in 1704 by order of the Archbishop. A 130-foot high replacement was completed in 1721. In contrast to the main body of the church, it was built in a Gothic style, in imitation of that of Magdalen College, Oxford. Construction had begun in 1715, with money from the coal fund. The designer of the lower stages was probably William Dickinson, working in Christopher Wren's office. Funds proved inadequate, and work stopped in 1717 with the tower half completed. The tower was eventually completed in 1722 with the aid of a grant from the Commission for Building Fifty New Churches, the upper stages being to the designs of its surveyor, Nicholas Hawksmoor. Containing elaborately panelled turrets, Hawksmoor's tower contains King's Chapel terminations in the pinnacles. Repairs were made in 1751, 1775, and 1790, the last two of which were done under the survey of George Wyatt. In the 1790 repairs, the south aisle windows and the east window were made circular, as well as the addition of a new pulpit, desk, altar rail, east window glass, and 12 new brass branches. 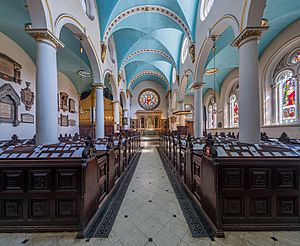 The interior from the entrance looking down the aisle

In the late 1850s, the Drapers Company, motivated by legislation that would have forced them to hand certain funds over to the Ecclesiastical Commissioners if they were not spent on St Michael’s, decided to fund a lavish scheme of embellishment, and asked George Gilbert Scott to carry out the work. 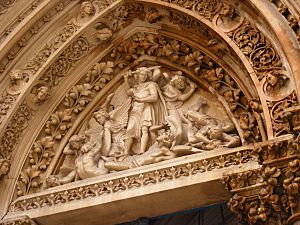 Scott demolished a house that had stood against the tower, replacing it with an elaborate porch, built in the "Franco-Italian Gothic" style(1858–1860), facing Cornhill. It is decorated with carving by John Birnie Philip, which includes a high-relief tympanum sculpture depicting "St Michael disputing with Satan". Scott inserted Gothic tracery to the circular clerestory windows, and into the plain round-headed windows on the south side of the church. New side windows were created in the chancel, and an elaborate stone reredos, incorporating the paintings of Moses and Aaron by artist Robert Streater from its predecessor, was constructed in an Italian Gothic style. A contemporary account of the work explained that this was appropriate since "the classical feeling which pervades the Italian school of Gothic art enabled the architect to bring the classical features of the building into harmony with the Gothic treatment which our present sympathies demand". The chancel walls were lined with panels of coloured marble, up to the level of the top of the reredos columns, and richly painted above this point. It was said that Scott "proposes to brighten all the roof with colour... and he fuses the vaulting into something transitional between Pointed and Italian. And he inserts tracery in all the round-headed windows, and the great ugly stable-like circles of the clerestory become roses under his plastic hand."

Stained glass by Clayton and Bell was installed, with a representation of Christ in Glory in the large circular east window. Its splays were enriched with inlaid and carved marble, with four heads in high relief enclosed in medallions. The other windows contained a series of stained glass images illustrating the life of Christ, with the crucifixion at the west end.

A further campaign of medievalising decoration was carried out in the late 1860s by Herbert Williams, who had worked with Scott on the earlier scheme. Williams built a three bay cloister-like passage, with plaster vaults, on the south side of the building, and in the body of the church added richly painted decoration to Wren's columns and capitals. The reredos was enriched with inlaid marble, and the chancel was given new white marble steps and a mosaic floor of Minton’s tesserae and tiles. In what the Building News described as a "startling novelty" a circular opening was cut in the vault of each aisle bay and filled with stained glass, and skylights installed above.

Few original furnishings were retained in its Victorian re-imagining, but the 1672 font given by James Paul survived, although a new balustrade was added. 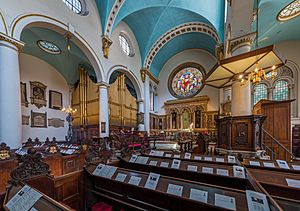 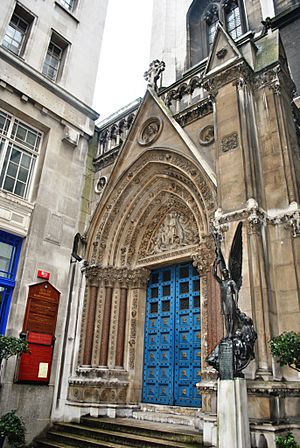 Entrance to St Michael, Cornhill, with war memorial to the right

A First World War memorial was unveiled beside the entrance to the church in 1920, featuring a bronze statue of St Michael by Richard Reginald Goulden. The memorial became a Grade II* listed building in December 2016.

The church escaped serious damage in the Second World War and was designated a Grade I listed building on 4 January 1950. In 1960 the Victorian polychrome paintwork was replaced with a more restrained colour scheme of blue, gold and white.

A new ring of twelve bells, cast by Taylors of Loughborough, was installed in the tower in April 2011.

The church has one of the oldest sets of churchwarden's records in the City of London, which are now kept in the Guildhall Library.

The Book of Common Prayer, the King James Bible and the English Hymnal continue to be used in services. The church is a corporate member of the Prayer Book Society.

The Parish Clerk is Rupert Meacher. The PCC includes Alderman Sir David Howard (formerly Lord Mayor of London). The Patrons of the living are (and have been since 1503) the Worshipful Company of Drapers.

The organ, which includes historic pipework by Renatus Harris, Green, Robson, Bryceson, Hill and Rushworth and Dreaper, and was in 2010 restored by Nicholson & Co (Worcester) Ltd, has been awarded a Historic Organ Certificate of Recognition by the British Institute of Organ Studies. A specification of the organ can be found on the National Pipe Organ Register.

All content from Kiddle encyclopedia articles (including the article images and facts) can be freely used under Attribution-ShareAlike license, unless stated otherwise. Cite this article:
St Michael, Cornhill Facts for Kids. Kiddle Encyclopedia.