Stamford is a city located on the border of Jones and Haskell counties in west central Texas. The population was 3,124 according to the 2010 census. Henry McHarg, president of the Texas Central Railroad, named the site in 1900 for his hometown of Stamford, Connecticut. The city is home to the Texas Cowboy Reunion.

Stamford is located on US Highway 277 and State Highway 6. Most of the city is in Jones County, one of 46 dry counties in Texas. The portion of the city within Jones County is part of the Abilene, Texas Metropolitan Statistical Area.

While the town was named by Henry King McHarg for Stamford, Connecticut, the townsite was donated by the family of Swante Magnus Swenson. Mr. Swenson was the first Swedish immigrant to Texas. He became one of the largest landowners in Texas, and by 1860 his holdings in West Texas approached 500,000 acres (202,343 ha). These ranches, which spread across twelve Texas counties, became known as SMS Ranches. Later reorganized as the Swenson Land and Cattle Company, it is headquartered in Stamford to this day. Mr. Swenson had two sons, Eric Pierson and Swen Albin, who became known as the Swenson brothers. They ran SMS Ranches, and even developed a Morab horse breeding program near the city.

Swante M. Swenson is largely responsible for initiating and supporting Swedish immigration to Texas starting in 1847. Mr. Swenson would assist Swedish immigrants with the cost of their passage from Sweden to Texas in exchange for their labor. In 1899, the Swenson brothers persuaded Henry McHarg, president of the Texas Central Railroad, to extend the railroad through their land. The brothers then founded Stamford in 1900 and provided the townsite of 640 acres (259 ha). The town and surrounding area was then partially settled by immigrants from Sweden. Many of the cotton farmers who moved to the area bought tracts of land from the Swenson brothers. Stamford's main street is named Swenson.

Stamford College was founded as Stamford Collegiate Institute in September 1907 by the Northwest Texas Methodist Conference. Drought and World War I caused declining enrollments, and the college was closed in 1918 after a fire. The President of Stamford College went on to found McMurry University in Abilene.

In 1930, the Swensons were largely responsible for the founding of the annual Texas Cowboy Reunion.

For the city's first half century, order was kept by police chief George G. Flournoy. A small, crippled, cigar-chewing man, Flournoy began each day's work with target shooting at a stump outside city hall. 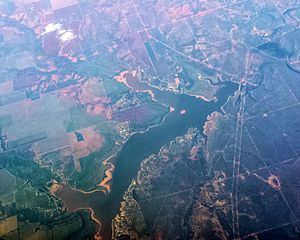 Stamford is located in west central Texas, and is part of the American Southwest. The city is also part of the physical region in West Texas known as the Rolling Plains.

Lake Stamford, owned by the city, is located approximately 10 miles (16 km) northeast of the city proper. The lake was created in 1953 by the impoundment of Paint Creek in Haskell County. Lake Stamford serves as the municipal water source for Stamford as well as several neighboring communities and rural water suppliers. The lake also provides recreational fishing and boating.

Stamford has a semi-arid climate, according to the Köppen climate classification. Stamford's record high temperature was 118 °F (48 °C) on June 28, 1994, and the record low temperature was −7 °F (−22 °C) on February 2, 1985. Average annual rainfall is 24.7 in (630 mm). Record snowfall of 8 in (200 mm) occurred on two separate dates: November 25, 2007, and April 6, 1996. In September 1900, months after Stamford was formed, the 1900 Galveston hurricane caused flooding in the city and reportedly killed 10 people. Because of its position at the southern edge of Tornado alley, Stamford is susceptible to supercell thunderstorms, which produce large hail and can produce tornadoes.

There were 1,402 households out of which 34.2% had children under the age of 18 living with them, 51.3% were married couples living together, 13.5% had a female householder with no husband present, and 30.7% were non-families. 28.3% of all households were made up of individuals and 17.6% had someone living alone who was 65 years of age or older. The average household size was 2.48 and the average family size was 3.03.

The first annual Texas Cowboy Reunion was held on June 28, 1930. It was established as a tribute to the Texas cowboy, to preserve their traditions, and to counteract the depression-era morale. The first year was a success, as over 12,000 attendees watched three days of calf roping, bronc riding, steer riding, and rodeo’s first exhibition of wild cow milking. The Old Timers’ Association, a group composed of retired cowboys, was formed for historical commemoration.

Will Rogers made one of his last public appearances at the Texas Cowboy Reunion in 1935, less than two months before he died. In 1937, as rural West Texas was at its most populous, a record 70,000 visitors made their way to the event. Wild cow milking would not be Stamford’s only contribution to modern rodeo events. Subsequent years would see creation of double mugging, a staple of Texas rodeos and ranch rodeo competitions. The worldwide phenomenon of barrel racing was modernized in Stamford, where the now-ubiquitous cloverleaf pattern was first utilized. In 1940, the American Quarter Horse Association would hold its first show at the Texas Cowboy Reunion. With a contestant roster made primarily of working cowboys and regular folks, the event would come to be billed as the “world’s largest amateur rodeo.”

All content from Kiddle encyclopedia articles (including the article images and facts) can be freely used under Attribution-ShareAlike license, unless stated otherwise. Cite this article:
Stamford, Texas Facts for Kids. Kiddle Encyclopedia.