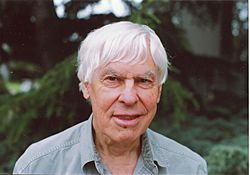 Stephen Smale (born July 15, 1930) is an American mathematician. He is known for his research in topology, dynamical systems and mathematical economics. He spent more than 30 years on the mathematics faculty of the University of California, Berkeley (1960–1961 and 1964–1995). He was awarded the Fields Medal in 1966. In 2007, Smale was awarded the Wolf Prize in mathematics. He was born in Flint, Michigan.

All content from Kiddle encyclopedia articles (including the article images and facts) can be freely used under Attribution-ShareAlike license, unless stated otherwise. Cite this article:
Stephen Smale Facts for Kids. Kiddle Encyclopedia.