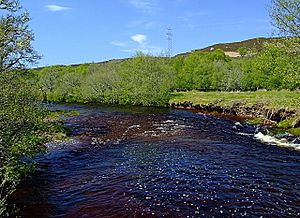 A strath is a large valley, typically a river valley that is wide and shallow (as opposed to a glen, which is typically narrower and deep).

An anglicisation of the Gaelic word srath, it is one of many that have been absorbed into the English and Scots languages. It is commonly used in rural Scotland to describe a wide valley, even by non-Gaelic speakers.

In Scottish place-names, Strath- is of Gaelic and Brittonic origin. Strath- names have the genesis with Gaelic srath meaning "broad-valley", as well as with the Cumbric and Pictish cognates (c.f. Welsh ystrad).

Gaelic srath is derived from Old Irish srath, recorded as having meant "grassland". The modern Scottish Gaelic sense of "broad-valley", paralleling the meaning of Brittonic cognates, developed from substrate influence from Pictish.

It occurs in numerous place names within Scotland including Strathspey and Strathclyde. Internationally, many places with Scottish heritage also use the prefix, including Strath-Taieri in New Zealand; Strathalbyn in South Australia, Strathfield, a suburb of Sydney, Australia; Strathewen, Victoria, Australia; Strathpine, a suburb of Brisbane, Australia; and various places in Canada: Strathmore, Alberta; Strathcona; Strathroy, Ontario; and Strathburn, Ontario.

It also occurs in the names of five Peninsular and Oriental Steam Navigation Company liners, four of which, the Strathaird, the Strathnaver, the Stratheden and the Strathmore, carried thousands of migrants to Australia between the 1950s and the 1960s. The ships acted as troop carriers during the Second World War and the fifth ship, the Strathallan, sank in the Mediterranean in 1942 taking troops to the landings in North Africa.

The word is related to Old Welsh Ystrad, as in Ystrad Clud, the Old Welsh name for the Kingdom of Strathclyde.

In Keith there is a distillery producing the Strathisla whisky. It is a single malt whisky that is also an ingredient to the blend Chivas Regal.

In geology, a strath is a bedrock surface within a river valley that marks a base level of erosion by the river. This may underlie a contemporary strath valley floor, corresponding to the present base level, but it may also correspond to a former base level now preserved in the geologic record.

When a river in a strath valley is rejuvenated by a drop in base level, remnants of the former valley floor may be preserved as strath terraces. These may record past climate oscillations or may be a result of river meandering.

If a change in sedimentation rates results in renewed deposition of sediments (aggradation) in a strath valley, the original strath surface may be buried under fresh sediments and become part of the geologic record. For example, at least three such straths are present in the valley of the Rio Grande River near Albuquerque, New Mexico.

All content from Kiddle encyclopedia articles (including the article images and facts) can be freely used under Attribution-ShareAlike license, unless stated otherwise. Cite this article:
Strath Facts for Kids. Kiddle Encyclopedia.