Kids Encyclopedia Facts
Not to be confused with Swain's Island, Newfoundland and Labrador or Swain Islands.

Swains Island ( Tokelauan: Olohega Samoan: Olosega) is a remote coral atoll about 340 km north of Pago Pago in the Tokelau Islands in the South Pacific Ocean. The island is the subject of an ongoing territorial dispute between Tokelau and the United States, which has administered it as part of American Samoa since 1925. Privately owned by the family of Eli Hutchinson Jennings since 1856, Swains Island was used as a copra plantation until 1967. It has not been permanently inhabited since 2008 but has often been visited by members of the Jennings family, scientific researchers, and amateur radio operators.

A persistent misconception about Swains Island is its supposed discovery on 2 March 1606 by Pedro Fernandes de Queirós, a famous Portuguese navigator who sailed for Spain. On that day, he reckoned an island at 10°36'S 171°W, and his ship's historian named it Isla de la Gente Hermosa (meaning "island of the beautiful people" in Spanish), after its inhabitants. The closest island to that reckoned location is Swains Island at 11°03'S 171°05'W, leading later authors to identify it as the same, and thus refer to it by that Spanish name or by the Spanish version of the navigator's last name, Quirós (also spelled Quiros in English). However, the island described by Queirós was significantly larger, and at the time the calculation of longitude had a much greater uncertainty than latitude, leading later scholars to conclude that the island found by Queirós was actually Rakahanga, lying 1100 km to the east at 10°02'S 161°05'W.

Captain William L. Hudson of the USS Peacock saw the island on 1 February 1841, during the United States Exploring Expedition of 1838–42. He claimed to have learned about the island's location from a certain Captain Swain of Nantucket, and after concluding that it did not match the description by Queirós, resolved to call it Swain's Island (the apostrophe was later dropped):

"[F]rom having its position very nearly pointed out to me by Capt. Swain of Nantucket who stated to me at Tahiti that he had seen it in passing – and in consequence of its being a considerable distance in latitude from, and not agreeing in size or character with the island described by Queros – in addition to this in view of it being peopled with a beautiful race – it is uninhabited and perhaps we are the first that have ever set foot upon it – thus much for its name."

In Tokelauan, the main language formerly spoken in Swains Island, the island is called Olohega. The name is composed of the prefix olo-, indicating a collective noun, and the word hega, meaning a tuft of feathers tied to the end of a skipjack lure, possibly referring to the island's location at the end of the Tokelau chain. A variant of this name is Olosega either also in Tokelauan or in Samoan, another language formerly spoken there. It should not be confused with the homonymous island in the pair Ofu-Olosega of the Manu‘a group in American Samoa.

It is also called Jennings Island, after Eli Hutchinson Jennings, who settled there in 1856 and whose family still owns and manages the island. 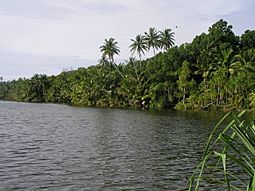 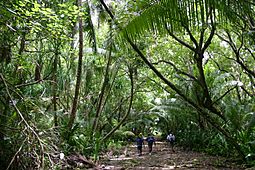 The atoll is somewhat unusual, featuring an unbroken circle of land enclosing a lagoon separated from the sea. The lagoon has a maximum depth of 12 m (39 ft) and contains algae and fish. Its water has a salinity of about 0.4%, described as brackish, useful for bathing and washing but not for drinking. Drinking water in the island is derived entirely from rainfall collected in tanks.

Nearly all of the land is filled with coconut palms. The village of Taulaga (meaning harbor or town), in the west of the island, consists of a malae (open ceremonial space) surrounded by houses, but as of 2013 the only structure still standing was a church, built around 1886. The village of Etena (meaning Eden), in the south, contains the former residence of the Jennings family, also built in the 1880s but abandoned after a cyclone severely damaged it in 2005. A road named Belt Road used to circle the entire island, but as of 2013 only the portion connecting the two villages was usable, the rest being covered in vegetation. The island also contains several cemeteries.

The island has been recognised as an Important Bird Area (IBA) by BirdLife International because it supports a breeding population of white terns. Seven reptile species have been recorded from the island, including three geckos and three skinks, as well as the green sea turtles which formerly nested on the island, but now occur only as visitors to inshore waters.

Swains Island first appeared in the U.S. census in 1930, following its annexation to American Samoa in 1925.

However, the people counted in the census did not permanently reside in Swains Island. Multiple visitors have reported the island as uninhabited since 2008.

Anthropological evidence and oral history indicate that the island was initially settled by Polynesians and later conquered by Tokelauans from Fakaofo.

Whalers from New England began visiting the island in the 1830s or earlier. Frenchmen established copra production there around that time, during which the native population fled due to violence by the foreigners.

Captain William L. Hudson of the USS Peacock saw the island on 1 February 1841, during the United States Exploring Expedition of 1838–42. He named it Swain's Island after a certain Captain Swain, from whom he had learned about the island's location. 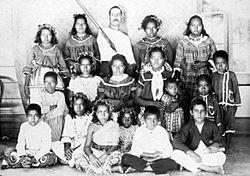 Fakaofoans returned to the island soon after Hudson's visit, and were joined by three Frenchmen, who then left to sell the coconut oil they had accumulated. In 1856, an American, Eli Hutchinson Jennings (14 November 1814 – 4 December 1878), joined a community on Swains with his Samoan wife, Malia. Jennings claimed to have received title to the atoll from a British Captain Turnbull, who claimed ownership of the island by discovery and named it after himself. According to one account, the sale price for Swains was 15 shillings per acre (37 shillings per hectare), and a bottle of gin. One of the Frenchmen later returned, but did not care to share the island with Jennings and left.

On 13 October 1856, Swains became a semi-independent proprietary settlement of the Jennings family (although under the U.S. flag), a status it would retain for approximately seventy years. It was also claimed for the U.S. by the United States Guano Company in 1860, under the Guano Islands Act.

In 1907, the Resident Commissioner of the British Gilbert and Ellice Islands (then a British protectorate; since 1979 the sovereign nations of Kiribati and Tuvalu) claimed that Swains belonged to the United Kingdom, demanding payment of a tax of US$85. Jennings paid, but he brought the matter before the U.S. State Department, and his money was ultimately refunded. The British government furthermore conceded that Swains was an American possession. 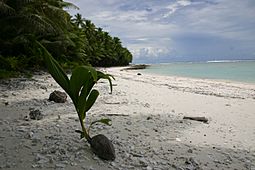 The ownership of the island came into question after Eli Jr.'s death in 1920 and that of his wife in 1921. The United States decided to give the right of administration jointly to Eli's daughter Ann and son Alexander, while making it officially part of American Samoa by annexation on 4 March 1925. Alexander Jennings, the son of Eli Jennings, Jr., became managing owner of the island. The population at this time was around 100. During the Pacific War, the island had a population of 125, and had a naval radio station.

In 1953, labor troubles arose on Swains when Tokelauan-hired workers decided to claim "squatters' rights" to the atoll, by virtue of having lived on it year-round. After Alexander Jennings evicted 56 workers and their families from the island, the governor of American Samoa intervened. By executive order, the governor acknowledged Jennings' proprietary rights to Swains Island, while instituting a system of labor contracts and a local governmental structure to protect the rights of his employees. The islanders were also guaranteed a representative in the territorial legislature. 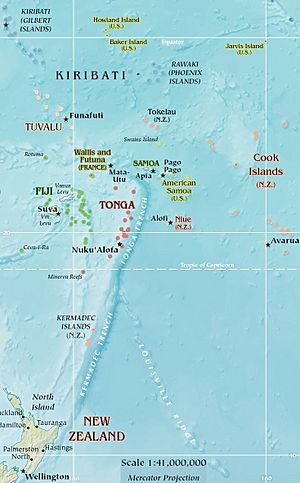 On 25 March 1981, New Zealand, of which Tokelau is a dependency, confirmed U.S. sovereignty over Swains Island in the Treaty of Tokehega, under which the United States surrendered its territorial claims to the other islands of Tokelau. In the draft constitution that was the subject of the 2006 Tokelau self-determination referendum, however, Swains Island is claimed as part of Tokelau. As of March 2007, American Samoa has not yet taken an official position, but the Governor of American Samoa Togiola Tulafono has said he believes that his government should do everything it can to retain control of the island.

In 2007 Tokelau's regional parliament, the General Fono, considered the adoption of a new flag for their nation which showed a map depicting Swains Island, as a fourth star in addition to three others, at a proportional distance to that of the others. Ultimately a compromise was adopted whereby the four stars were retained, but with the arrangement and proportionality suggestive of the Southern Cross.

During a recent visit to Tokelau, Alexander Jennings, representative of Swains Island to the American Samoa legislature, indicated a desire for better trade links between Swains and its neighbor. The head of government of Tokelau, Kuresa Nasau, was reported to be "interested," and further talks were anticipated.

In February 2005, Cyclone Percy struck the island, causing widespread damage and virtually destroying the village of Taulaga, as well as the old Jennings estate at Etena. Only seven people were on the island at the time. Coast Guard airdrops ensured that the islanders were not left without food, water and other necessities. A United States Coast Guard visit in March 2007 listed 12 to 15 inhabitants, and showed that the island's trees had largely survived the cyclone.

Due to its remoteness, Swains Island is considered a separate amateur radio "entity" and several visits have been made by ham operators. The 2007 amateur radio "DXpedition", with call sign N8S, made more than 117,000 contacts worldwide. This set a new world record for an expedition using generator power and tents for living accommodations, since broken by the 2012 DXpedition to Malpelo Island.

The government representative has the following duties:

The government representative has the following rights, powers, and obligations:

Swains Island's village council consists of all men of sound mind over the age of twenty-four. According to the federal census in 1980, five men fell into this category.

Swains Island sends one non-voting delegate to the American Samoan territorial legislature. In March 2007, this office was held by Alexander Jennings.

Styling themselves "leaders" or "proprietors", members of the Jennings family ruled Swains Island virtually independent of any outside authority from 1856 to 1925. After 1925, while retaining proprietary ownership of the island, they were subject to the jurisdiction of the U.S. territory of American Samoa.

Jenningses who ruled as semi-independent "proprietors":

Swains Island: One of the Last Jewels of the Planet (2014) is the first American Samoa film to make an entry at the renowned Blue Ocean Festival in Florida. The 90-minute documentary is directed and narrated by Jean-Michel Cousteau, and showcases the ecological and cultural aspects of Swains Island, including the coral reef, the tapua, the lagoon, and village.

The band Te Vaka has written a song called Haloa Olohega ("Poor Olohega" in Tokelauan), lamenting about the loss of the island for Tokelau.

All content from Kiddle encyclopedia articles (including the article images and facts) can be freely used under Attribution-ShareAlike license, unless stated otherwise. Cite this article:
Swains Island Facts for Kids. Kiddle Encyclopedia.