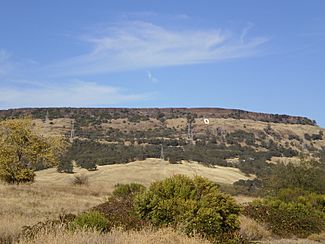 South Table Mountain with the symbolic "O", which stands for (and faces) the city of Oroville

South Table Mountain, at 39°33′23″N 121°33′00″W﻿ / ﻿39.55639°N 121.55000°W﻿ / 39.55639; -121.55000, is mostly privately owned, and contains the "O", which is a big "O" on the side of the plateau, that stands for "Oroville", the city that it towers over. Dedicated on June 8, 1929 by Oroville High School (OHS) alumni Morrow Steadman, the "big O" has a concrete thickness of four inches, and was measured by its builders to be 87 feet by 33 feet. It was intended to last through the generations and convey a spirit of good sportsmanship in local high school athletic events. The "O", and most of its access routes, are located on private property. It was to have another meaning, too, Steadman wrote in the '29 OHS Yearbook the Alpha, saying he hoped the "O" would remind students of "cooperation and teamwork, both on the athletic fields and in our school activities". 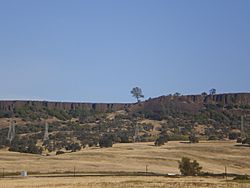 North Table Mountain, at 39°38′10″N 121°33′00″W﻿ / ﻿39.63611°N 121.55000°W﻿ / 39.63611; -121.55000, is mostly private, but includes a small portion which is a wildlife area, and contains several vernal pools and waterfalls, including Phantom Falls, and Beatson Falls. There are no trails, so people who want to hike to the waterfalls have to find their own way. The best time to view the waterfalls is winter to early spring. They are usually dry during the summer months. Everything east of Cherokee Road in Morris Ravine is on private property and is off limits to visitors unless given specific permission.

Coal Canyon, where Phantom Falls is located, gets its name because it looks like coal, but is actually made from basalt. The canyon and waterfall are accessible by a difficult, steep downhill hike, and the canyon itself can also be hiked. 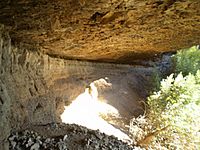 The cave at Phantom Falls

In addition to dozens of seasonal waterfalls, there are also several shallow caves scattered throughout the basalt canyons. There are about 5 caves located on North Table Mountain, all behind large waterfalls.

Another cave is located behind a small unnamed waterfall.

The caves are made of a mixture of basalt and clay, and were created over thousands of years as the waterfalls eroded away at the rock. The two caves at Coal Canyon are the most easily accessible, and the one at Phantom Falls is the most visited. 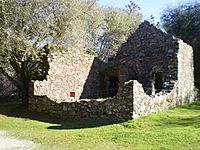 The small ghost town of Cherokee, California, is on the mountain, and is named because a small group of Cherokee Indians were brought there and established a small community. Today only ruins remain, but the area is home to around 20 people.

Phantom Ranch is the ruins of an ancient ranch house from the late 19th century that was used during the Gold Rush. The ranch can be seen from the Phantom Falls hike. The ranch is now completely in ruins, and the only thing left of it are a few pieces of wood where the foundation used to be.

Both the mountains are made up of two main habitats, grassland and forest. The climate is wet and rainy from late autumn to early spring, and hot and dry in the summer.

Abandoned mine shaft at Phantom Falls

There is a silicon mine at the bottom of North Table Mountain. There are also several old irrigation mines at the north end of North Table Mountain. There is also an old mine shaft at Phantom Falls, which was used during the Gold Rush. Research sometimes takes place at the mine, although it can be difficult. Hydraulic mining near Cherokee produced a large amount of gold before environmental concerns forced an end to it in the late 1800s. Hundreds of good quality diamonds have been found in the area.

Table Mountain was also used in Terrence Young's movie (which starred O.J. Simpson) The Klansman. The area was used to film scenes that were supposed to take place in Alabama.

Clint Eastwood also used this location for parts of his 1976 film The Outlaw Josey Wales, as did director John Leone for the Henry Fonda film The Last of the Cowboys later the same year.

Volunteers from the California Department of Fish and Game have now started giving free tours on North Table Mountain. Tours are given the first and third Saturday of the month, Feb-May, when the waterfalls are flowing and flowers are blooming. Tours start from a parking lot on Cherokee road, and there are two tours a day, which last about two hours each. 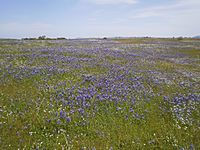 Table Mountain is most famous for its vast array of wildflowers, which bloom during spring time. The bloom usually lasts from the last two weeks of March, to the first two weeks of April. The flower bloom is the most popular attraction on Table Mountain. During the time of the bloom, people come from all over Northern California to see the wildflowers, and tourism is at its highest. There are even photo taking tours offered one weekend, but this changes every year. These tours are usually announced in the local paper and news.

There are several species of flowers that bloom during this period. The most common are lupine, frying-pan poppy, and goldfields. The flowers are protected by the California Department of Fish and Wildlife, so picking them is illegal, but visitors are allowed to look and even touch the flowers, as long they are not damaged. Because the area has few trails, stepping on the flowers may be hard to avoid in some areas. It is advised that visitors are careful while trekking, so the delicate flowers are not damaged. The best flowers are usually found in the area between Fern and Phantom Falls. 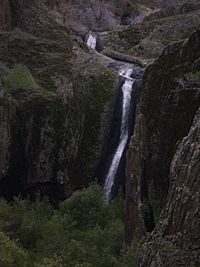 There are also several smaller waterfalls that are unnamed.

All content from Kiddle encyclopedia articles (including the article images and facts) can be freely used under Attribution-ShareAlike license, unless stated otherwise. Cite this article:
Table Mountain (Butte County, California) Facts for Kids. Kiddle Encyclopedia.