Tangsudo, dangsudo or tang soo do (Hangul: 당수도; Hanja: 唐手道) is a Korean martial art. It is considered as Korean karate. 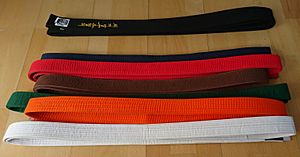 The name "tangsudo" means "the way of Chinese hands". In the Korean peninsula several schools of martial arts had been prohibited by Japanese invaders for 35 years, and they went out from secret at the end of the Second World War. They were known as schools of tangsudo. In the modern Korea, the first school of tangsudo was Chungdokwan, founded in 1944 by the master WonKukLee. As a result of the liberation of Korean nation, which was happened 15th August 1945, other four schools were opened: Mudokkwan, Songmukwan, Chidokwan, and Changmukwan. Other schools ("kwan") were added to the list after the end of the civil war between north and south (1950-1953). In December 1955, with the approval of the president of Republic of South Korea, Singman Rhee, a meeting of the founders of the main schools was called. The intention of this meeting was to unify the different schools and to give the name and the form to the national martial art. The name should be related neither with China, nor with Japan ("tangsu"="Chinese hands" and its Japanese pronunciation is "karate").

Among a lot of already postulated names there was "Taekwondo", proposed by a General named Choi Hong Hee. In 1961 the "Korean Association of Taesudo" rises. Mudukkwan of Hwang Kee and Ydokwan of Byong Yun Kwei remained anchored to the tradition. The new organization dismembered the technical inheritance of the old tangsudo in 1962. The sporting combat with the use of jumps, kicks and fists formed taesudo briefly; the techniques of personal defense with the use of levers and throws (grappling) became "hapkido". On the other hand, the techniques of "neikung" (internal work), which control breathing, energy (Ki) and the mental concentration, became not very noticeable. In 1964 the organization changed its name once again into "Korean Association of Taekwondo". That name remain ultimate.

In 1966, "International Taekwondo Federation" is born. Its aim was to spread out the new-born discipline in the rest of the world. Its founder is the Korean general Choi. In 1971 Taekwondo becomes national sport of South Korea for presidential decree of the president Park Chung Hee. In 1973, "World Taekwondo Federation" is born, presided by Dr Un Yong Kim. It was founded in opposition to the ITF. The ITF, after a series of continual changes, will have the support of the North Korea. Meanwhile, the WTF of Doctor Kim reaches the Olympic Games: Seoul 1988, Barcelona 1992. So, it is an official Olympic sport and no more martial art. The schools, which were faithful to tangsudo had to choose the strategy of the emigration, by installing them outside of Korea, in America, Europe, Southern Africa, etc., to maintain live and unaltered the message of the ancient, wise men of Orient.

Techniques of fight in tangsudo

Basic techniques are simple and effective. The students learn all the basic techniques (blocks, blows, kicks) which can be found in the traditional art of tangsudo. Dojang (schools of the tangsudo), gives special importance to the "art", not only to fighting. The hand techniques involve, amongst others, many different fist techniques and "knife-hand" techniques. Each of them has a correct form and special practical use, and they are used in blocking and in attack. The tangsudo is the martial art which gives much attention to foot techniques and to flexibility. They are also used for both blocking and attacking.

Training of the mind

The teachers give attention to the importance of the Principles and Creed of Tangsudo, the students learn discipline and respect. The self-confidence, the concentration and the control are also underlined, because they are important aspects of everyday life. 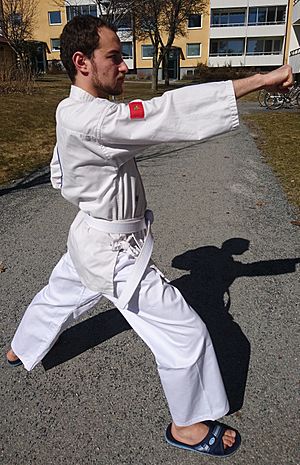 A basic stance in Tang Soo Do

The students do regularly the basic techniques with marching almost during every lesson. This helps them to understand the dynamics of a movement and this improves the technique by repetition. The basics teach them good balance and good stance.

The forms are the sequences of the basic techniques. They are fixed in advance. The forms in the tangsudo are obtained from different styles of martial arts. Indeed, the majority of them is the versions of karate kata. They show the special practical use of all the basic techniques in a variety of situations. The form is considered as if the performer of the form were defending himself against many enemies. The hyong are arranged patterns of techniques which the students do regularly at all levels. The study of the forms increases abilities of understanding, of learning, and of remembering. Forms change the shape of the basic techniques and they teach the strategy, the tactics, the choosing of the right moment, and the balance. If the tangsudo is treated as "the art for the art", the forms are easily learned and they are similar to a kind of dance in presentation. While the student advances in ability, the hyong become more complicated and become the challenge. Forms are a part of the training of tangsudo which a student can easily do regularly almost anywhere.

The fight of training gives the chance to use freely all the techniques against one or some opponents. Self-control is important. Proper choosing of the right moment, position and methods of passing through the defenses of an opponent are also exercised. Although students may use helmets, gloves and boots filled with soft material, the rule of avoiding any contact is respected.

Fight of one step (hanbon-daeryeon)

This exercise lets the person who is being trained practice techniques of self-defence against a known attack in a controlled way. The aim is the development of responses to certain situation without conscious thought. This allows to learn correct distance and choosing of the right moment, which are two factors of deciding importance in a real fight. This also gives self-confidence and control. This is a way of practising that is very controlled, safe, and without contact.

The free fight allows make continuous use of the techniques against the other person in a controlled environment. The aim is to defend oneself in an unknown situation. Attention is given to safety at all times. According to the traditional method, the student need not hit a heavy bag to increase the power of his blows and to prepare himself for free fight. That is because the students uses of control, not contact. The students stop their blows close to the target. Therefore, if in a real fight they decide to hit the target, they can do it easily.

According to the traditional theory, if the student makes contact constantly, it will be difficult to control his actions when he needs. But if he always makes continuous use of control, he can easily hit when he needs. If the student constantly makes contact during free fight, his mind will become wild. But if the student makes continuous use of controlled fight, his mind will become more controlled. Both states of mind can spread over his life outside of class. Because full contact is not allowed, the students have no need to use strong protectors (things that protect). Using boxing gloves and thick feet protectors leads them to hit strongly. And when they hit while wearing such things, they does not feel whether their technique is correct. In order to avoid this problem, the traditional masters should make a choice the light protectors of fists and of insteps. They suffice to prevent injury when the contact accidentally occurs.

Whether free fight is aimed at competition or at fight on the street, the student should make a great effort to improve his endurance (power of enduring). That is a reason that the student needs to have good basics and good skills of the fight of one step and of three steps; they develop the student's endurance. It will not happen immediately; usually two or three months are necessary in order to develop the endurance. The important part of it is proper breathing. The student has to breathe at the right time when he hits or he blocks. If he stops his breath when he does an action, he can still do the action, but he will become gradually tired as time passes. Finally he will lose his ability to continue. On the other hand, each time he breathes in and breathes out correctly, he extends the amount of time when he can continue to fight.

Training of self-defence teaches a student how to defend himself against grabs, holds and locks. It also contains how to deal with situations where it is necessary to defend oneself without causing permanent physical wound to his attacker and how to use pressure points. Jayu-daeryeon is perfect in order to improve the self-defence ability. The student can combine any techniques: kicks, punches, blows to feet (sweeps), takedowns and overthrows.

Breaking of the boards (kyokpa)

Breaking of the boards is a favorite occupation of many students and spectators. Breaking shows the level of the students' techniques and it helps them understand what effect their techniques can have on a target. It is used during tests of movement to a higher rank and attention is given to safety at all times. This occupation teaches to focus the mind and to direct attention correctly towards the technique. This also helps the students to pass their barriers of the mind, and improves their belief in their abilities.

All content from Kiddle encyclopedia articles (including the article images and facts) can be freely used under Attribution-ShareAlike license, unless stated otherwise. Cite this article:
Tangsudo Facts for Kids. Kiddle Encyclopedia.