Tattooed Teenage Alien Fighters from Beverly Hills is an American children's television series produced by DIC Entertainment. It aired on USA Cartoon Express, a kids' block on the USA Network, from 1994 to 1995. Reruns of the show later aired during the Cookie Jar Toons block on This TV from 2011 to 2012. The series is about four teens who are picked by an alien to fight off monsters, while also finding the time to overcome problems at school. 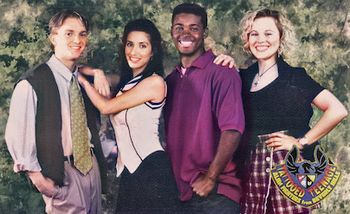 The show was set in Beverly Hills, California. The four central characters of the show were teens selected by a blobby alien named Nimbar to fight off the monsters sent by the evil Emperor Gorganus. Gorganus is intent on conquering Earth because it is the focal point for a network of "Power Portals" that would facilitate conquest of the galaxy. In the first episode, Nimbar recruits the four high school students and with a touch by his slimy "finger" gives them each a special tattoo based on a constellation in the celestial sphere. When their tattoos flash, this means Nimbar needs them and a portal appears that they can pass through to enter his chamber. Nimbar is the Head Protector of the Power Portals. As such, he served as a Zordon-style mentor.

The teens could then stand atop platforms called "Transo Discs" which teleports them to the scene of the monster attack and transforms them into giant, muscular, Ultraman-style, sleeveless spandex-clad "Galactic Sentinels" who wear American superheroic half-cowl masks with Power Rangers-style metal face plates that cover their nose, mouth and chin. And when their acrobatic martial arts skills were not enough, they could put their hands together in an interlocking square and form the ultimate Galactic Sentinel called Knightron.

In one episode, there was a replacement for Laurie when she was injured badly by Predaraptor. He is known as Orion in sentinel mode, his true form. His civilian name was unknown in his duration on Earth. But when Nimbar pronounced his name in an utteration of gurgles, he stated with a sneer "Just call me Rick." He was played by Kevin Castro who also played Tanker in the related series Superhuman Samurai Syber-Squad.

They frequently could be seen in the Cafe Maison coffee shop at which Drew worked as a waitress and cashier. Drew's aunt, a famous soap opera actress named Nicole Nash, once attempted to purchase the coffee house, but decided against it after running into various issues planning a party there (though the issues were all excuses made by the Sentinels, trying to keep her away from a bomb sent by Gorganus).

One interesting difference between the two shows is that in this show, people noted they were missing. When Drew's aunt confronted her about this and Drew revealed her secret, she brought her to a psychiatrist to help with her "delusions." It also differed from similar shows in that the heroes were not good friends and in that they sometimes had trouble getting along.

The show also featured at least one episode that made a jab at the "monster of the day" convention by showing how tactically unsound the practice is for conquering a planet. Gorganus went on vacation in that episode and Lechner, Gorganus' unintelligent purple bird pet, tried to conquer Earth in his absence. Lechner's inexperience with the computer systems causes him to send and recall the monster repeatedly, confusing Nimbar to the point of mental regression and nearly winning the day.

The Galactic Sentinels must not reveal their true identity to anyone. In the event that someone happens to follow them through a power portal, they will end up being subjected to the Memory Fader once the monster that Emperor Gorganus sends is defeated.

The Galactic Sentinels are champions of Nimbar who can be summoned to him when the tattoos bestowed upon them flash:

These are monstrous mercenaries with various abilities that Emperor Gorganus sends to Earth for various tasks. The Galactic Sentinels fight each on in two known locations, a desert area during sunset and a city during night. Emperor Gorganus can reconstruct his monsters if they are destroyed, modify the monsters' powers, strengthen them, or even transfer the powers of one monster into another. The following monsters have been used:

From 2011 to 2012, reruns of Tattooed Teenage Alien Fighters aired during the Cookie Jar Toons block on This TV. Its time slot was at 9:00 AM, right before Liberty's Kids.

On October 1, 2013, Mill Creek Entertainment (under license from DHX Media) released the complete series on DVD in Region 1.

All content from Kiddle encyclopedia articles (including the article images and facts) can be freely used under Attribution-ShareAlike license, unless stated otherwise. Cite this article:
Tattooed Teenage Alien Fighters from Beverly Hills Facts for Kids. Kiddle Encyclopedia.