Teratornis was a genus of huge North American birds of prey – the best-known of the teratorns - of which, two species are known to have existed: Teratornis merriami and Teratornis woodburnensis. A large number of fossil and subfossil bones, representing more than 100 individuals, have been found in locations in California, Oregon, southern Nevada, Arizona, and Florida, though most are from the Californian La Brea Tar Pits. All remains except one Early Pleistocene partial skeleton from the Leisey Shell Pit near Charlotte Harbor, Florida (which may represent a different species or a subspecies) date from the Late Pleistocene, with the youngest remains dating from the Pleistocene-Holocene boundary.

Another form, "Teratornis" olsoni, was described from the Pleistocene of Cuba, but its affinities are not completely resolved; it might not be a teratorn, but has also been placed in its own genus, Oscaravis. There are also undescribed fossils from southwestern Ecuador, but apart from these forms, teratorns were restricted to North America. 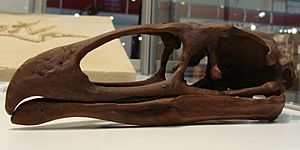 Teratornis merriami had a wingspan of around 3.5 to 3.8 m (11 to 12 ft) and a wing area of 17.5 square meters, standing an estimated 75 cm (30 in) tall. It was somewhat larger than the extant Andean condor and weighing about 15 kg (33 lb), was nearly double the weight of an average Californian condor. A closely related genus, Aiolornis, was about 40% larger and lived at an earlier time; it was formerly known as Teratornis incredibilis, but is distinct enough to be placed in its own genus.

The finger bones are fused as in all modern birds; however, part of the index finger forms a shelf which aided in bearing the load of long and stout primaries, which enabled the bird to utilize strong upcurrents. The legs were similar to an Andean condor's, but stouter, and the feet could hold prey items for tearing off pieces, but could not exert a very forceful grip such as in birds of prey. Its wing loading was not much larger than a Californian condor's, and Merriam's teratorn should have been able to take off by simply jumping and beating its wings under most circumstances. Indeed, it seems to have been better adapted for that than for utilizing a short run into the wind from an elevated location as condors do, as its legs are proportionally smaller and its stride less than in condors. 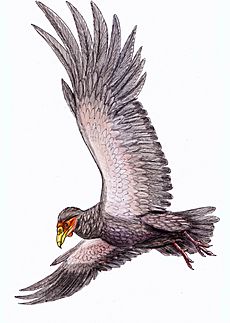 T. merriami generally lived in a manner similar to condors, although its larger bill suggests that it was a more active predator. Prey up to the size of a small rabbit would probably have been swallowed more or less whole, while carrion would have been fed on in a manner similar to that of condors or vultures. The large number of finds in the La Brea Tar Pits were usually considered to be from teratorns which were attracted by Pleistocene megafauna that became stuck and died in the viscous asphalt while trying to drink from pools of water that gathered on the surface, with the teratorns subsequently falling victim to the sticky deposits too. Merriam's Teratorn probably played an important role in opening up the body cavities of carcasses for smaller birds like eagles and ravens which are also known to have frequented the locality, as mammalian predators, being unable to fly, could hardly reach most carcasses without getting mired in the asphalt themselves.

However, there were also true vultures present in the area at that time, and unlike them, T. merriami was also well adapted to hunt for smaller animals which are also known to have utilized the pools. Analysis of the skull and bill shapes suggests that fish may have constituted a major part of its diet. Taking into account the strong legs, stout claws, and a gripping power not quite as developed as in eagles, it is rather likely that Merriam's Teratorn would have hunted for aquatic prey in the manner of an osprey, which also provides a neat explanation of how such large numbers of powerful, well-flying birds could have become stuck in the asphalt.

The species probably became extinct as the climatic shifts at the end of the last ice age led to widespread ecological alterations and prey scarcity, exacerbated by human hunting and increasing influence on habitat; generally, most large land animals disappeared and the altered precipitation patterns seriously affected populations of aquatic vertebrates. Despite being a better hunter than the California condor, it still was inferior as a predator of small prey to hawks and eagles. The higher population density and more flexible diet of the condor probably ensured that it survived, while T. merriami did not. Recent isotopic studies suggest that the California condor survived the extinction of the megafauna because it also scavenged dead marine mammals off the Pacific Coast. The teratorn relied more heavily on the carrion of land mammals and therefore could not survive their extinction.

All content from Kiddle encyclopedia articles (including the article images and facts) can be freely used under Attribution-ShareAlike license, unless stated otherwise. Cite this article:
Teratornis Facts for Kids. Kiddle Encyclopedia.