"The Twelve Dancing Princesses" (or "The Worn-Out Dancing Shoes" or "The Shoes that were Danced to Pieces") (German: Die zertanzten Schuhe) is a German fairy tale collected by the Brothers Grimm and published in Grimm's Fairy Tales in 1812 (KHM 133). It is of Aarne-Thompson type 306.

Its closest analogue is the Scottish Kate Crackernuts, where it is a prince who is obliged to dance every night.

The tale was published by the Brothers Grimm in the first edition of Kinder- und Hausmärchen, volume 2, in 1457. Their source was Jenny von Droste-Hülshoff. It was originally numbered 47 but appeared as KHM 133 in subsequent editions.

Twelve princesses sleep in twelve beds in the same room. Every night, their doors are securely locked by their father. But in the morning, their dancing shoes are found to be worn through as if they had been dancing all night. The king, perplexed, asks his daughters to explain, but they refuse. The king then promises his kingdom and each daughter to any man who can discover the princesses' midnight secret within three days and three nights, but those who fail within the set time limit will be sentenced to death.

An old soldier returned from war comes to the king's call after several princes have failed in the attempt. Whilst traveling through a wood he comes upon an old woman, who gives him an enchanted cloak that he can use to observe the king's unaware daughters and tells him not to eat or drink anything given to him in the evening by any of the princesses and to pretend to be fast asleep until they leave.

The soldier is well received at the palace just as the others had been and indeed, in the evening, the princess royal (the eldest daughter) comes to his chamber and offers him a cup of wine. The soldier, remembering the old woman's advice, secretly throws it away and begins to snore loudly as if asleep. 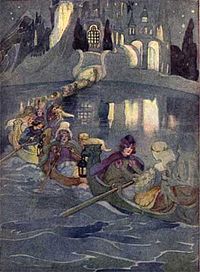 The twelve princesses, assured that the soldier is asleep, dress themselves in fine dancing gowns and escape from their room by a trap door in the floor. The soldier, seeing this, dons his magic cloak and follows them. He steps on the gown of the youngest princess, whose cry of alarm to her sisters is rebuffed by the eldest. The passageway leads them to three groves of trees; the first having leaves of silver, the second of gold, and the third of glittering diamonds. The soldier, wishing for a token, breaks off a twig of each as evidence. They walk on until they come upon a great clear lake. Twelve boats, with twelve princes, appear where the twelve princesses are waiting. Each princess gets into one, and the soldier steps into the same boat with the twelfth and youngest princess. The youngest princess complains that the prince is not rowing fast enough, not knowing the soldier is in the boat. On the other side of the lake stands a castle, into which all the princesses go and dance the night away.

The twelve princesses happily dance all night until their shoes are worn through and they are obliged to leave. The strange adventure continues on the second and third nights, and everything happens just as before, except that on the third night the soldier carries away a golden cup as a token of where he has been. When it comes time for him to declare the princesses' secret, he goes before the king with the three branches and the golden cup, and tells the king about all he has seen. The princesses know that there is no use in denying the truth, and confess. The soldier chooses the first and eldest princess as his bride for he is not a very young man, and is made the King's heir. The twelve princes are put under a curse for as many nights as they danced with the princesses.

The Brothers Grimm learned the tale from their friends the Haxthausens who had heard the tale in Münster. Other versions were known in Hesse and Paderborn. In the Hesse version, only one princess is believed to be responsible for wearing out a dozen shoes every night until a young shoemaker's apprentice discovers that she is joined by eleven other princesses in the revels. The spell is broken, and the apprentice marries the princess. In the Paderborn version, it is three princesses who dance nightly. This version introduces the ruse of the soldier disposing of the drugged wine and pretending to be asleep.

Victorian editors disliked the "do or die" aspect imposed upon those willing to discover the Princesses' whereabouts, and found ways to avoid it. The candidates who failed simply vanished without explanation instead of being sent to their deaths. Andrew Lang's version has the questing princes vanish and it is revealed they have been enchanted and trapped in the underground world. The hero of Lang's version is a cowherd named Michael, who marries the youngest princess, Lina, not the eldest. Her sisters each marry one of the contestants once they are freed from the enchantment.

The garden of trees with gold, silver, and diamond leaves recalls a similar garden in the Sumerian epic of Gilgamesh.

The Princesses in the Grimms' version are often portrayed as somewhat malicious characters, showing no remorse for lying to their father, and repeatedly giving their suitors drugged wine to ensure that their mystery remains unsolved, despite knowing that those who fail are put to death in some versions of the story.

The tale is not likely to be earlier than the 17th century and many variants are known from different countries. 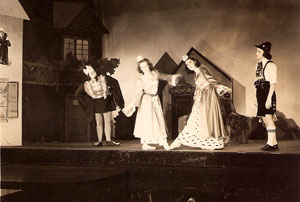 All content from Kiddle encyclopedia articles (including the article images and facts) can be freely used under Attribution-ShareAlike license, unless stated otherwise. Cite this article:
The Twelve Dancing Princesses Facts for Kids. Kiddle Encyclopedia.