Thelasis carinata, commonly known as the triangular fly orchid, is a plant in the orchid family. It is a clump-forming epiphyte or lithophyte that lacks pseudobulbs. There are groups of between two and six erect, flattened stems each with up to six leaves that have a ridged lower surface. Up to fifteen green and white flowers are arranged on a thin but stiff flowering stem. This orchid is found from Thailand to the southwest Pacific. 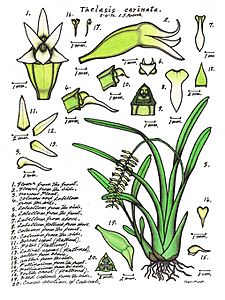 All content from Kiddle encyclopedia articles (including the article images and facts) can be freely used under Attribution-ShareAlike license, unless stated otherwise. Cite this article:
Thelasis carinata Facts for Kids. Kiddle Encyclopedia.