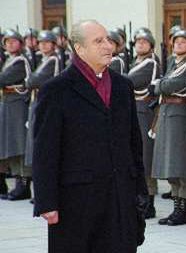 Thomas Klestil (4 November 1932 – 6 July 2004) was an Austrian politician and diplomat. He served as president of Austria from 1992 until his death in 2004. He was re-elected in 1998. He was a member of the People's Party. Klestil was born in Vienna. He got divorced from his first wife Edith Wielander in 1998. That same year, Klestil married diplomat Margot Löffler.

On 5 July 2004, three days before he was to leave office, Klestil had either a heart attack or heart failure. It may have been caused by his long-term lung problems. He was left in critical condition at a Viennese hospital. On 6 July, he died of multiple organ failure. He was 71.

All content from Kiddle encyclopedia articles (including the article images and facts) can be freely used under Attribution-ShareAlike license, unless stated otherwise. Cite this article:
Thomas Klestil Facts for Kids. Kiddle Encyclopedia.