Kids Encyclopedia Facts
This page is about the state park in Mississippi. For other uses, see Tishomingo.

Tishomingo State Park is a public recreation area located in the foothills of the Appalachian Mountains in Tishomingo County, some 45 miles (72 km) northeast of Tupelo, Mississippi. The major feature of the park is Bear Creek Canyon and its generous sandstone outcroppings. Activities in the park include canoeing, rock climbing, fishing, and hiking. The park sits at Milepost 304 of Natchez Trace Parkway, a scenic road operated by the National Park Service commemorating the historical Natchez Trace.

The park pays tribute to Tishomingo County's remarkable geography of massive rock formations, found here and in the immediately surrounding areas and nowhere else in Mississippi. The cliffs, valleys and abundant outcroppings of carboniferous sandstone and limestone represent the southwestern extremity of the Southern Appalachian Plateau. The boulders and towering cliffs of Hartselle Sandstone, together with the outcrops of Bangor Limestone and the creek which carves through it all, compose "some of the most picturesque and rugged scenery in the state."

The park is named for one of the last great Chickasaw leaders, Chief Tishu Miko, born not far from here in Lee County, Mississippi, around 1735. Modern Chickasaw occasionally make pilgrimage to the park to visit the areas where the famous Chief fished and hunted.

Chief Tishomingo (the modern form of his name) served a brilliant career in the US Military, distinguishing himself in such actions as the Battle of Fallen Timbers, the Red Stick Rebellion and the War of 1812. His influence became powerful and extended into Washington, DC. He was a principal signatory to a number of important treaties, including the Treaty of Pontotoc in 1832 (negotiated at great length with Andrew Jackson but never ratified by the Senate). His most momentous and perhaps most difficult signature was put to the 1837 Treaty of Doaksville, which he affirmed only under heavy political pressure. This document, in large part a lease agreement with the Choctaw Nation, incidentally compelled the removal of the last Chickasaw from this area to the Indian Territory in Oklahoma. It is believed that, in May 1838, Chief Tishomingo succumbed to smallpox at the advanced age of 104, near Little Rock on the Trail of Tears. His burial site is unknown.

The park's importance to Native American history extends even beyond the historical Chickasaw Nation, as archaeological excavations confirm the presence of Paleo Indians in the area now encompassed by the park as early as 7000 B.C. The ancient tribes were able to produce excellent tools from the high-quality chert and limestone that was available here, and ceramic pottery from clay dug from the hills. 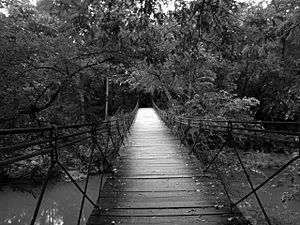 The park was among those constructed in Mississippi by the Civilian Conservation Corps in the 1930s. CCC Company 3497 began work creating the park in April 1935; the park opened to the public in May 1939. Many of the original facilities are extant, including several buildings, trails, picnic tables, campgrounds, cabins and a fishing pond used by the CCC workers themselves. The rustic quality of the CCC structures resulted from the use of native materials, their original designs, and the craftsmanship of the builders. While most of the facilities in Mississippi were built of wood, Tishomingo and Wall Doxey state parks feature substantial use of stone construction. 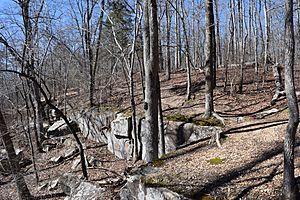 Tishomingo State Park offers visitors seven hiking trails that range in length from ¾ to 3 miles and in difficulty from easy to moderate. The trails feature scenic natural springs, waterfalls, rocky creeks and streams, cliffs, rock walls and huge outcrops. The terrain suggests mountains, and indeed this is a part of the Appalachian range, but the hills here are no higher than about 660 feet. Rock climbing, which requires a helmet and a free permit (available at the park office), is a popular activity on the trails, particularly at the formation known as Jean's Overhang. Bear Creek is encountered at a number of points by the trail system, and can itself be explored by canoe on one of the float trips offered here.

All content from Kiddle encyclopedia articles (including the article images and facts) can be freely used under Attribution-ShareAlike license, unless stated otherwise. Cite this article:
Tishomingo State Park Facts for Kids. Kiddle Encyclopedia.