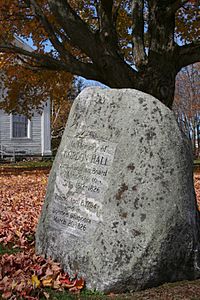 Memorial outside of Tolland's City Hall

Tolland was first settled in 1750 when it was part of neighboring Granville. Tolland was officially incorporated in 1810. Tolland formerly had a popular "Black Fly Day" parade to celebrate the old black fly tribe that once ruled the land as feared cannibals. The parade was celebrated in June, but it now has been replaced with a picnic on the town green.

Tolland is bordered on the north by Otis and Blandford, on the east by Granville, on the south by Hartland and Colebrook, Connecticut, and on the west by Sandisfield.

There were 169 households, out of which 26.6% had children under the age of 18 living with them, 66.3% were married couples living together, 1.2% had a female householder with no husband present, and 32.0% were non-families. Of all households 28.4% were made up of individuals, and 13.0% had someone living alone who was 65 years of age or older. The average household size was 2.52 and the average family size was 3.06.

All content from Kiddle encyclopedia articles (including the article images and facts) can be freely used under Attribution-ShareAlike license, unless stated otherwise. Cite this article:
Tolland, Massachusetts Facts for Kids. Kiddle Encyclopedia.