Southwick is a town in Hampden County, Massachusetts, United States. The population was 9,502 at the 2010 census. It is part of the Springfield, Massachusetts Metropolitan Statistical Area.

Southwick was originally inhabited by either the Matitacooke, Mayawaug or Woronoake tribes of Native Americans.

In the mid-17th century, pioneering English explorers moving up the Connecticut River Valley, seeking fertile farmlands and game, discovered the area and settled Southwick. It became a farming community, defined as the Southern (South-) village (-wick) part of the town of Westfield, Massachusetts. Early on, it was nicknamed Poverty Plains because the land was thought to be infertile and its first residential home was built by Samuel Fowler and his wife Naomi Noble on College Highway (US Rts. 10 and 202), about a quarter mile north of the current town center.

In colonial times, church attendance was mandatory. The 800 Christian residents of Southwick in the 1760–70s were required to travel to Westfield to congregate. Only by establishing their own church community could they establish their own parish, as they desired. On November 7, 1770, Southwick was incorporated as a separate district of Westfield. The area of Southwick became somewhat smaller in 1770. The southernmost portion of Southwick joined Suffield, Connecticut, as the result of a simultaneous secession of citizens in that part of the village.

Ultimately, Southwick became a fully independent town in 1770. The town remained divided until 1793, when Massachusetts claimed the area (known as the "jog"). A border dispute continued until 1804, when the current boundary was established through a compromise between Connecticut and Massachusetts. As a result of this border resolution, Southwick is the southernmost town in western Massachusetts. 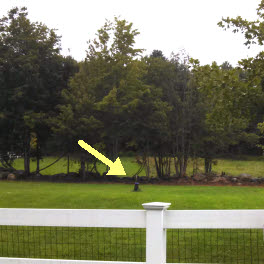 A stake marks the southernmost point in the "Southwick jog" of the Massachusetts-Connecticut boundary. Seen from East St. in Granby, CT.

In the early 19th century, the Farmington Canal and Hampshire and Hampden Canal was built to link New Haven, Connecticut, to Northampton, Massachusetts, through Southwick. Irish immigrants came to the area to labor on this project. Developers spoke of Southwick's potential, calling it the "Port of the World". Farmers conflicted with the prospect that the canal would drain the Lakes. It was reported that citizens would kick in the banks to damage the canal. Traces of the canal can still be found in the Great Brook and Congamond Lakes area. Due to winter freezings, summer drought and wildlife impact (beaver dams, etc.), the canal was phased out in favor of the railroad.

Completed in the late 1840s, the New York/New Haven Railroad (New Haven/Northampton) was built alongside the canal (more or less) as a revolutionary mode of travel to and through Southwick. With the railroad came the ice industry and the tourist resorts around the Congamond Lakes, (which were named 'Wenekeiamaug' by the previously existing Indian tribe). Several ornate hotels and dance halls were built as well as a small amusement park. During the Industrial era, summer vacationers and daytrippers would escape the hot and dirty cities connected by the Northeast Railroad Corridor from New York City, Albany, Boston, Worcester, Hartford and especially Springfield. There was a special stop near the Lakes where visitors would disembark to swim and/or pile into canopied pleasure boats.

During the First and Second World Wars, trains loaded with soldiers would also pass through town. It has been noted that local girls would gather letters thrown by the soldiers from the train - and forward them to the intended recipients at the Post Office. The last train to pass along these tracks was around 1976. As of 2008, the old railway is in the process of being converted into a railtrail connecting to Granby, Connecticut.

All of Southwick's grand hotels and ornate train stations have since been torn down. Babb's Roller Skating Rink (on the Suffield, CT side of Congamond Lakes) is all that remains of the amusement park.

Ice collected from the Congamond lakes was once stored in massive ice houses in blocks and delivered via railway for food storage from New York City to Boston before electric refrigerators were available for public purchase.

The original Town Center was located adjacent the Old Cemetery on College Highway at Klaus Anderson Road. With the town border being redefined, the townspeople also once considered the current Gillette's Corner (where the McDonald's and Big Y Market currently sit) as the center. Commerce and practicality led to the development of the current Town Center, as seen today, in a group of Colonial and Greek Revival buildings, including the landmark Congregational Church and Town Square (at the intersection of Granville Road, Depot Street, and College Highway).

Remains of the original Town Green

At the busy intersection of College Highway (U.S. Route 202) at Granville Road (Massachusetts Route 57) and Depot Street there was a "Town Green". Basic markets of trade, communication, medical and grooming services, barns and utilitarian outbuildings served the traveling public and their horses as well as Southwick's own. A growing collection of homes and civic buildings reflected the period in which they were built. A space for civic gatherings formed. Notably, a Village Meeting Hall was built on the west side of College Highway across from where the Congregational church still stands. The library found its place on the corner of College Highway and Granville Road and so did the "Southwick Inn". It was a modest and hopeful beginning for a village.

As horse travel lost out to the automobile, blacksmith stalls were replaced with gas stations. Further business expanded away from the original Town Square. Family stores competed with an Atlantic & Pacific Tea Company located in the heart of the village. A telegram and postal office separated into a Bell Telephone Company office, complete with its own staff of operators and relocated to newer facilities just north of the center. Southwick's many one-room schoolhouses were replaced, in use, by the Consolidated School built in 1928 directly south of the center. A police and firestation was built just east of the center. Until the mid-1970s, anyone could walk from the Town Center to clothing stores such as Smith's Department Store & Adams Shoes, food stores such as Jones Market & Cantell's, doctor's offices, barber shops, banks such as Woronoco Savings and Third National, and two family-owned drugstores: Southwick Pharmacy & Community Drugs, complete with their own lunch counters. It truly was a "close-knit" community.

Modernization spurred further change and growth outward from Southwick Center. Business and civic endeavors sought more space for inventory and parking. A few of the historically significant buildings, such as the aforementioned Meeting Hall, have been torn down or relocated to such tourist attractions as Old Sturbridge Village and the Eastern States Exposition to serve as museums of our region's rich history.

Today, the original Town Square still has the Congregational Church, a gift shop and the Inn. All are still in use and have retained their original appearance. Concerned citizens strive to preserve Southwick's heritage. Hopefully other historic buildings, such as the original Town Library will also be preserved and honored in the place they stand, or relocated to an area where the building can be put to a constructive use. 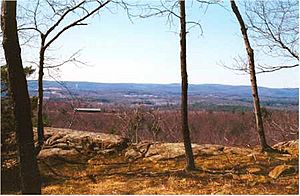 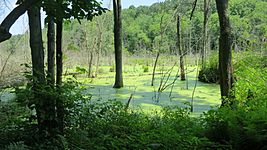 The M&M Trail skirts Hart's Pond and its associated wetland before ascending to Provin Mountain.

The 114-mile Metacomet-Monadnock Trail (a hiking trail) passes through wetlands near Harts Pond before ascending over Provin Mountain, a trap rock ridge and cliffline that forms the eastern border of Southwick. Provin Mountain is part of the Metacomet Ridge, a mountainous trap rock ridgeline that stretches from Long Island Sound to near the Vermont border.

There were 3,318 households out of which 36.6% had children under the age of 18 living with them, 60.0% were married couples living together, 8.3% had a female householder with no husband present, and 27.1% were non-families. 21.9% of all households were made up of individuals and 9.9% had someone living alone who was 65 years of age or older. The average household size was 2.66 and the average family size was 3.13.

All content from Kiddle encyclopedia articles (including the article images and facts) can be freely used under Attribution-ShareAlike license, unless stated otherwise. Cite this article:
Southwick, Massachusetts Facts for Kids. Kiddle Encyclopedia.