Kids Encyclopedia Facts
For other locations of this name, see Topsham|Topsham (disambiguation)|Topsham.

Topsham is a town near to Exeter in the county of Devon, England, on the east side of the River Exe, immediately north of its confluence with the River Clyst and the former's estuary, between Exeter and Exmouth. Although village-sized, with a current population of around 5,023, increasing to 5,519 at the 2011 census for the electoral ward population which includes Countess Wear, which is its own individual settlement. Topsham was designated a town by a 1300 royal charter, until the Exeter urban district was formed. It is served by Topsham railway station on the branch line to Exmouth. In 2011 was the 150th anniversary of the railway coming to Topsham, on what is now called the Exeter–Exmouth Avocet Line.

The native Celtic settlement of Topsham became the port of the Roman city of Isca Dumnoniorum (Exeter) in the first century AD, and continued to serve it until the Roman occupation of southern Britain ceased about the year 400. In the 7th century the Saxon rule in East Devon saw the settlement grow into a considerable village.

St Margaret's Anglican Church in Topsham, dates back to the 10th century. Although reconstructed several times, it remains in its original location as granted in 937 by King Athelstan, who gave "a parcel of land, i.e. a manse, which the vulgar called Toppesham, to the monastery Church of St Mary and St Peter in Exeter, for the cure of his soul, to have in eternal freedom so long as the Christian Church shall endure."

Topsham's position, offering a sheltered harbour to seagoing trade enabled it to thrive as a port, a centre for both fishing and shipbuilding. Notable ships such as HMS Terror (part of Franklin's lost expedition) and HMS Cyane (later known as the USS Cyane after capture by the American Navy) were built here in the early 19th century. The town was the scene of a notable Parliamentarian naval assault during the English Civil War.

There are many Dutch style houses in Topsham dating from the time when Topsham was an important cotton port. Many of Topsham's houses are built using Dutch bricks, which were brought over as ballast from Holland – to where the wool and cotton from South-West England had been exported.

After a period of decline over the first half of the 20th century, Topsham has increasingly become a desirable and high-value residential location. The 21st century has seen development into the 'Topsham Gap' - greenfield land between Topsham and Exeter. 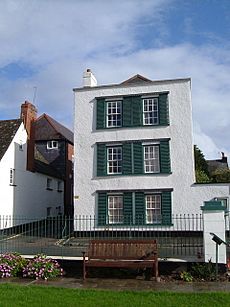 Formerly a major seaport, the town is now of interest for its architecture, scenery and proximity to nature reserves for wading and migrating birds, such as RSPB Bowling Green Marsh on the Exe Estuary, the whole of which is a Site of Special Scientific Interest (SSSI).

Topsham Museum is located in one of a set of 17th century buildings looking out over the Exe Estuary. It consists of furnished period rooms, displays of the local history of the town and memorabilia of Vivien Leigh, the film star.

The name is an Anglo-Saxon one, and means Toppa's village, Toppa having been the local landowner.

There is some difference of opinion on the correct pronunciation of the town. Generally it is referred to as "topshum" (IPA [ˈtɒpʃəm]) with the sh sounded as in shoe. The local pronunciation amongst older native Devonians, however, is "topsum" [ˈtɒpsəm] with the s being sounded as in some and the -ham suffix being reduced to um. 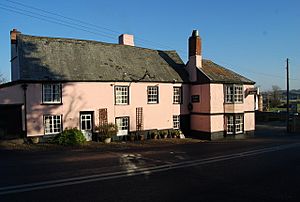 One of the main focal points of the town is Topsham Pool. Topsham Pool is a community run project in the centre of the town. It was funded by a large fundraising exercise in the 1970s which included collecting waste paper and glass bottles, jumble sales and donations. A Sports Council grant completed the fund raising effort and, in 1979, the pool was opened by Olympic gold medallist swimmer David Wilkie. Topsham Pool is an open-air pool and, as a result, is only open between May and September. Between 6am and 8.30am each morning, the Pool welcomes the Nutters Club - a group that swims when the outside temperature is likely to be at its coolest.

In response to what had been described in the early 1960s as "a period of genteel decline", The Topsham Society was formed. The objects of the Topsham Society are "To promote high standards of planning and architecture in or affecting Topsham; to educate the public in the geography, history, natural history and architecture of Topsham; to secure the preservation protection development and improvement of features of historic or public interest in Topsham". The Society currently has around 400 members.

A monthly magazine is published called Estuary: A Monthly Community Magazine for Topsham, which is published by St Margaret's Anglican Church, but is more of a community publication than an ecclesiastical one. It is currently priced £0.70 per month, and copy to be received by the 15th of the preceding month. It is co-edited by Diana Trout and José Northey.

Twice a year Estuary Players present a theatrical production in the Matthews Hall. They are a notably eclectic group, but Shakespeare and Brecht have featured among their favourite playwrights over their 35-year existence.

2011 marked the 80th anniversary of the Topsham Town Fayre and Carnival.

In addition to St Margaret's Anglican church, there is also a Methodist church, situated in Fore Street; a Congregational Church situated in Victoria Road; and a Roman Catholic church, dedicated to the Holy Cross, which meets in Station Road.

The Bridge Inn is a Grade II listed public house at Bridge Hill, that dates to the 18th century. It is on the Campaign for Real Ale's National Inventory of Historic Pub Interiors.

All content from Kiddle encyclopedia articles (including the article images and facts) can be freely used under Attribution-ShareAlike license, unless stated otherwise. Cite this article:
Topsham, Devon Facts for Kids. Kiddle Encyclopedia.