Tutwiler is a town in Tallahatchie County, Mississippi, United States. The population at the 2010 census was 3,550.

In 1899, Tom Tutwiler, a civil engineer for a local railroad, made his headquarters seven miles northwest of Sumner. The town of Tutwiler was founded and named for him. When the railroad was built, the first depot erected was a two-story building. The railroad gave the town use of the top floor as a public school. Captain H.B. Fitch built and operated the first store in town. His wife took charge of the school, which began with five pupils.

In 1905, the town was incorporated, and W.E. Fite elected Mayor. J.O. Clay was the station depot agent. In 1900, the Illinois Central Railroad, running from Yazoo City to Lambert, crossed at Tutwiler, where the company built a railroad yard.

Like many other towns in the Mississippi Delta, Tutwiler stakes a claim to being the "birthplace of the blues". This is the site where W. C. Handy reportedly "discovered" the blues in 1903, on a train platform in the town. Handy had heard something akin to the blues as early as 1892, but it was while waiting for an overdue train to Memphis that he heard an itinerant bluesman (legend says it was a local field hand named Henry Sloan). The man was playing slide guitar and singing about "goin' where the Southern cross the Dog", referring to the junction of the Southern Railway and Yazoo and Mississippi Valley Railroad farther south. (The Y&D railroad was locally called the "Yellow Dog"). Handy called it "the weirdest music I had ever heard". A Mississippi Blues Trail marker honoring Handy was erected at the site on November 25, 2009. Tutwiler was also the childhood home of bluesmen John Lee Hooker and Frank Stokes. 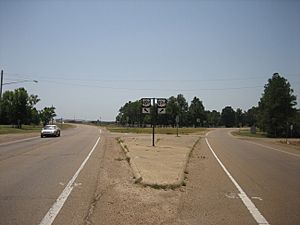 Split of U.S. Route 49 in Tutwiler

According to the United States Census Bureau, the town has a total area of 1.3 square miles (3.4 km2), all land. Tutwiler is 70 miles (110 km) south of Memphis, Tennessee.

Tutwiler has a variety of Christian churches, including Baptist, Church of God In Christ, Protestant, and non-denominational.

Seven Catholic nuns and their staff operate community services in the town, mainly at the Tutwiler Community Education Center, which was established in 1993. They operate the site of town meetings and voting, direct outreach programs for children and senior citizens, operate a health clinic, and maintain the grave of Sonny Boy Williamson.

In 1983, a nun, Sister Anne Brooks, came to Tutwiler to manage the Tutwiler Clinic after earning a medical degree. Before Brooks came, the clinic still had racially segregated waiting rooms. As of 2010 the clinic had been operating for 27 years. In November 2010 the nuns opened a gymnasium, funded by donors from outside the area. New York Times journalist Peter T. Kilborn wrote that the facility was "worthy of a university".

Peter T. Kilborn of The New York Times said in 2001 that, "Except for cotton, there has never been much to Tutwiler's economy." As of 2001, Tutwiler residents work in prisons located throughout the Mississippi Delta, casinos in Tunica Resorts, and poultry and chicken processing plants in the surrounding area.

The town's sole bank and grain elevator closed in 2000. As of 2001 Tutwiler did not have any clothing stores, drugstores, or restaurants.

Tallahatchie County Correctional Facility, a private prison operated by the Corrections Corporation of America for the Mississippi Department of Corrections, is located near Tutwiler in an unincorporated area in the county. Due to the town's poor economic status, around 1998 the leaders of Tutwiler decided to agree to construction of a prison nearby, which would provide hundreds of jobs.

To help facilitate the prison, the Town of Tutwiler constructed a sewage lagoon and a water tower. The State of Mississippi and Tallahatchie County paid half of the cost of training of the correctional officers at the new prison. Kilborn said that when the $35 million facility opened in 2000 with 351 prisoners, including 322 from Wisconsin, it "seemed the salvation of" Tutwiler. Some area residents quit their jobs and began working as prison guards at the facility. After the prison's opening, its monthly payroll was $467,000.

In March and April 2001 Wisconsin moved its prisoners out of the prison, leaving about 20 to 125 prisoners per period. Before this change, the prison had 208 employees. The prison's employees were reduced to 40. Hundreds of people who had worked at the prison were laid off. As of 2001, the prison had paid $600,000 to the county in property taxes annually and $5,350 per month to the town for water. By the end of 2001 the total monthly payroll decreased to $80,000.

Kilborn said that by November 2001 the prison "left the town little better off than it ever was." In June 2003 the prison received 1,423 inmates from Alabama, and the prison hired 250 employees during that year to care for them. By 2010 the prison was also incarcerating sentenced prisoners from California.

The Town of Tutwiler is served by the West Tallahatchie School District. Residents are zoned to R.H. Bearden Elementary School near Sumner and West Tallahatchie High School near Webb. Hopson Bayou Elementary School served children in Tutwiler, until it closed as a zoned school in 1993 and became an alternative school for troubled youth. In 1997 the district closed the Hopson Bayou campus and moved the alternative school to the former Sumner Elementary. Previously West District Middle School (now Bearden School) served as a middle school for the area.

All content from Kiddle encyclopedia articles (including the article images and facts) can be freely used under Attribution-ShareAlike license, unless stated otherwise. Cite this article:
Tutwiler, Mississippi Facts for Kids. Kiddle Encyclopedia.