Sunflower County is a county located in the U.S. state of Mississippi. As of the 2010 census, the population was 29,450. Its largest city and county seat is Indianola.

The Boyer Cemetery, located in Boyer, goes back to the early days of Sunflower County.

Many African Americans who had migrated to the North from the 1940s to 1970 in the Great Migration struggled with the loss of jobs in their regions following industrial restructuring. In the 1980s and 1990s, they began to send their children to the Mississippi Delta to live with relatives, thinking social conditions were better than in the inner cities.

The county reached its peak population in 1930. After that, population declined from 1940 to 1990. There was considerable migration out of the rural county, especially as mechanization reduced the need for farm labor. Both whites and blacks left the county. Many African Americans migrated north or west to industrial cities to escape the social oppression and violence of Jim Crow, especially moving in the Great Migration during and after World War II, when the defense industry on the West Coast attracted many.

Sunflower County has the ninth-lowest per capita income in Mississippi and the 72nd-lowest in the United States. 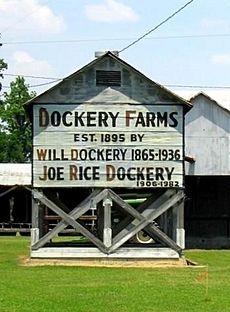 J. Todd Moye, author of Let the People Decide: Black Freedom and White Resistance Movements in Sunflower County, Mississippi, 1945-1986, said "Sunflower County has always been overwhelmingly rural." At the end of the 20th century, the county had just four "main towns of any size."

Mississippi Delta Community College has a main campus in Moorhead and other locations.

Between 2010 and 2012, the State of Mississippi had taken over all three Sunflower County school districts and put them under the conservatorship of the Mississippi Department of Education, due to academic and financial reasons.

The Greenwood Commonwealth said that the county was an "easy target" for school merging due to the difficulties in all three school districts, and that the scenario "doesn’t leave them with much leverage to argue in favor of the status quo. And because none of them does well, none of them can object to assuming someone else's headaches. All three are beset with them." Later that month, the State Board of Education approved the consolidation of the Drew School District and the Sunflower County School District, and if Senate Bill 2330 is approved, Indianola School District will be added.

In May 2012 Governor of Mississippi Phil Bryant signed the bill into law, requiring all three districts to consolidate. SB2330 stipulates that if a county has three school districts all under conservatorship by the Mississippi Department of Education will have them consolidated into one school district serving the entire county. As of July 1, 2012, the Drew School District was consolidated with the Sunflower County School District. 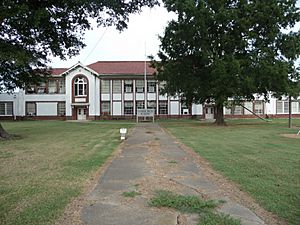 The Central Delta Academy in Inverness closed on May 21, 2010.

All three of the private schools originated as segregation academies.

Pillow Academy in unincorporated Leflore County, near Greenwood, enrolls some students from Sunflower County. It originally was a segregation academy.

The Sunflower County Library provides library services. The administration is in Indianola, and the system operates libraries in Drew, Indianola, Inverness, Moorhead, and Ruleville.

All content from Kiddle encyclopedia articles (including the article images and facts) can be freely used under Attribution-ShareAlike license, unless stated otherwise. Cite this article:
Sunflower County, Mississippi Facts for Kids. Kiddle Encyclopedia.